Home » A Cold Winter’s Eve: In Conversation with Craig Hurd-McKenney 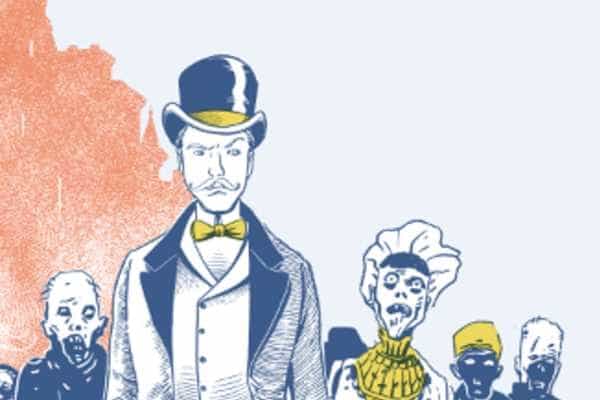 Some Strange Disturbances is returning with a collection of Christmas tales, “A Cold Winter’s Eve”. We caught up with series creator Craig Hurd-McKenney to hear more about it.

A Place To Hang Your Cape: Can you please set the scene for “A Cold Winter’s Eve”?

Craig Hurd-McKenney: The trio of main characters – a gay psychic, a black chorale performer—both are American—and a British socialite – have just been through two monstrous attacks in Part 1 (released in late 2019) and Part 2 (release coming in December 2020). Friendships have been solidified; a potential suitor has arrived; a marriage proposal has been made. And Christmas is here! Prescott, Delilah and the Comtesse are looking forward to their first Christmas together. And thus begins the tradition of Christmas Eve ghost stories around the hearth.

AP2HYC: How did you decide what ghost stories to include?

CHM: It was moreso a matter of which creators I wanted to include. I selected specific artists who have their own unique style and voice, and I gave them carte blanche to create their own stories in their own way. It’s a great deal of fun to be surprised by what is coming in, as I’m a fan of theirs, first & foremost. I’ll still be functioning as an editor/ curator, but I want them to be true to their artistic vision without micromanagement. We’re going to get body horror, cultural trauma horror, romantic horror. The artists are definitely not playing around with their stories or their scares.

AP2HYC: Looking back at Some Strange Disturbances Vol. 1 and Vol. 2, what have you tried to replicate, and is there anything you’ve tried to do differently with Vol. 3?

CHM: At the heart of the story is the relationship between the three main characters. You need an emotional center for people to care. And I believe in the way that horror and tragedy has pulled these hurt, lost individuals together as a little family. The trick, or the different thing I’m doing, for A Cold Winter’s Eve—the third volume—is I don’t have the scripts from the other artists yet. I’ll have those late December, so I will then match each story to one of the three main characters and what is going on with their individual stories at that time. Prescott may have found the love of his life, but he is still scared of coming out. Delilah is on a quest to find something lost, but does she need the thing she is looking for with her newfound family right in front of her? And the Comtesse is starting to let her guard down now that she can truly be herself. Those vulnerabilities could turn into an Achilles’ Heel at any moment. And more evil lurks on the horizon. So, the cast can never be too careful.

AP2HYC: Why do you think it is about a Victorian setting that works so well with horror? What does a period setting have over a contemporary ghost story?

CHM: The Victorian era is perfect because it reflects a lot of the same social upheaval we’ve been experiencing the last few years. I started writing it as a way to deal with my own anxieties, and I wanted to help people who might be feeling that same fear or sense of loss or pain. We have lived through it before, and we’ll get through it again. But in other ways, the Victorian era is especially useful because my stories take place right at the end of the 19th Century, with an Industrial Revolution about to happen or already slightly underway. The phone, the automobile…they’re all about to become available to a small portion of the public. And that will change everything.

To that, I think technology is what makes things trickier in a modern story. Cell phones, infrared cameras et al can take the scare out of things. I do have an upcoming horror-sci-fi hybrid coming up…but I feel slightly less creative about horror in this moment in 2020.

Although shout out to art like HOST, a new horror film set during the 2020 pandemic. In it, the characters decide to have a seance over a computer group chat. Spoilers: it doesn’t go well. But, the film itself is so scary. It proves there are ways to make a modern horror tale scary. But for me, technology mostly is like a weapon against horror; a distraction from the inner life of the main characters we need to dig into, given our obsession with our devices. So, I like the idea of the characters and their inner lives really being the focus. Maybe some day I’ll resolve that inner conflict in myself and tell a modern horror story. But in the meantime, I’m going to be hanging out in Victorian London.

AP2HYC: Can you tell us a bit about the creative team on “A Cold Winter’s Eve”? And who’s joined the team since Vol. 1?

CHM: Regular series artists Gervasio and Carlos Aon are getting a headstart on Book 4, “The Demon Bride,” while we take our Christmas Eve ghost story break in “A Cold Winter’s Eve.” Peter Gross and Vince Locke (DC Vertigo’s The Unwritten, DC Black Label’s The Dollhouse Family) will be illustrating the frame story, while artists Melisa Jones, Lauren Franklin, Kam White, Keni Thomas, G Romero Johnson, and Michael W Conrad (soon-to-be co-writer on DC’s Immortal Wonder Woman and Midnighter) bring us tales of terror. You will not be disappointed in these stories. As I said, each artist is so unique in their approach and I am so proud to be working with them.

AP2HYC: Are the wheels turning for Vol. 4 yet?

CHM: Like I said, Volume 4 is “The Demon Bride.” That proposal is starting to sound like not such a good idea. Vol. 4 will tie off a lot of threads from the first three issues and it also sets us up for the next few books: a run in with Queen Victoria (and Herne the Hunter), a mummy loose on the streets of London, and the screaming skull of Bettiscombe. I hope you’ll all join us on the journey because it’s an absolute blast to work on this project.

For more information, check out the Kickstarter page here and then sound off in the comments or send us your thoughts on Facebook or Twitter!