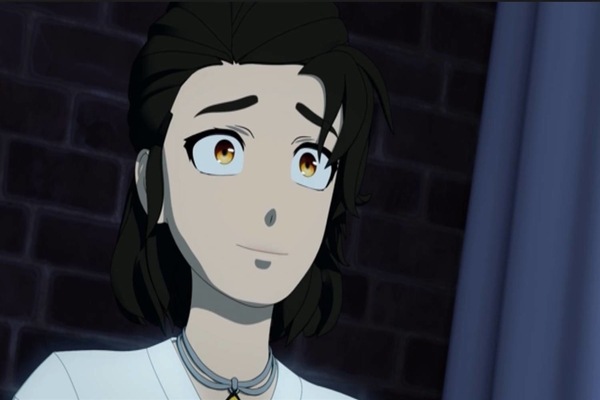 If a person is mistreated, how far can the subject be pushed before they snap? Do they have the resolve to overcome their pain, or retaliate in a fashion imprinted upon them by their tormentor? RWBY explores such questions in a highly-anticipated episode, finally exploring the backstory of Cinder Fall, the series’ main antagonist. Cinder has been a problematic character, coming off as somewhat undeveloped, merely craving power, and never learning her mistakes. The episode provides some answers to her character and mental state.

Cinder was raised for the first ten years of her life in a Mistral orphanage, where she is often bullied and left to do the handiwork. That is until a hotel owner strictly known as the Madame adopts Cinder. Though, it is not out of affection, but to just have a permanent servant to use and mistreat, without pay or gratitude. The Madame comes with a pair of snickering daughters (both voiced by Amalee), who enjoy taunting Cinder.

Cinder goes through a lot of misery and crap, made worse when the Madame gives her a shock collar, made of lightning Dust, used to electrocute Cinder when she makes mistakes or causes a scene. The Madame is obviously a complete cow (note: the “No Faunus Allowed” sign on the hotel’s front desk), burning the mantra, “Without you, I am nothing,” into Cinder’s mind. Aside from Salem, it is no wonder why Cinder hates authority figures.

She eventually steals the sword of a Huntsman named Rhodes, smuggling it to her attic bedroom. However, Rhodes appears, having noticed Cinder’s mistreatment for some time. Rather than get into a fight, Rhodes offers to train Cinder for seven years until she is ready to try out for the Huntsman exams. Rhodes tells her that she must be patient and work for her freedom, or she will run forever. Over the next four years, Rhodes comes and goes, training Cinder every time he visits the hotel. However, Cinder is still left to suffer at the hands of the Madame and her daughters.

Rhodes gifts Cinder with one of his swords, believing she has matured. That is until the stepsisters inform the Madame that Cinder has a weapon. When Rhodes returns to the hotel, he finds Cinder has murdered the sisters, holding the Madame by the throat with one hand. The Madame tries to electrocute Cinder, but she is able to withstand the pain, breaking the cow’s neck. She removes the collar, though it leaves her with a neck scar. Though in a moment of elation, Cinder declares she is free and won’t have to run anymore, a disappointed Rhodes replies that running is all she will ever do.

Realising Rhodes is now standing in her way of freedom, Cinder engages him in a fight. Rhodes is able to cover his skin in metal (think Colossus from X-Men), but Cinder burns him with her own Semblance, breaks his aura, and impales him with his own blade. Before dying, Rhodes pats her on the head affectionately. Cinder looks up to the moon, shedding a tear, now free.

Though Cinder tried to follow Rhodes’ philosophy to endure and build character through patience, her suffering from her stepfamily pushed her too far. She could not commit, and when given a weapon, she used it to free herself. This does explain a lot about Cinder’s behaviour: her disregard for others, rejecting personal relationships, obsession with stealing the power of others, and her stubborn impatience and inability to learn from her mistakes. Cinder will seize and cling to whatever power she can gain, particularly if it is over others. Yet, her relationship with the Madame mirrors Salem.

Cinder wakes up in the Grimm whale, horrified that a concerned Emerald brought her back. A smug Mercury shows up, once again pointing out that Cinder doesn’t care for Emerald. When Cinder tries to order the duo out, Mercury reveals he has got a promotion to become Salem’s lieutenant. Cinder looks visibly hurt by this, expecting blind obedience from her minions. If only she treated Emerald with actual appreciation, mirroring just how the Madame treated her.

Oscar has seen better days, sporting some nasty bruises from his playdates with Hazel. He has a chat with Ozpin, realising that Hazel is holding back with Oscar. The two Ozs recall how Salem uses her minions to sabotage trust in the kingdoms, suggesting they do a reversal of that in Salem’s inner circle. Hazel arrives, a little reluctant to beat up Oscar, until Ozpin surfaces. Ozpin and Hazel have a chat about Salem. Hazel describes Salem as a force of nature, believing she can’t be stopped, whilst Ozpin sends children to die in a fight that cannot be won. Ozpin counters, revealing that bringing the four Relics together will bring about mankind’s destruction.

Salem gathers her inner circle, including Oscar as a prisoner, Mercury in his new position, and Emerald and Neo are on the sidelines. She quickly punishes Cinder, burning her with her Grimm appendage in an act similar to how the Madame electrocuted her. Cinder looks like she is on the verge of snapping, until Salem apologises for holding Cinder back in her pursuit for power and freedom. Salem helps Cinder stand, asking her to go to Atlas, free Watts, and steal the Winter Maiden’s magic. But, Salem remains a master manipulator, pitting Cinder against the Hound, though she will be the real winner. Oscar objects, but Salem scolds him.

We catch up with Winter and fussy Ace Ops, who are bickering in the back of the aircraft. Elm badmouths Penny, pissing off Winter, who tells them to put up or shut up. Marrow notices Jaune’s distress signal, alerting them about the river of Grimm. Winter lands, reuniting with Yang, Jaune, and Ren. Harriet is more concerned about Penny’s location, flabbergasting Jaune. Even the Grimm have had enough of Harriet’s bad attitude, spouting up like a geyser, allowing Grimm to spawn on Atlas’ underbelly, destroying the city’s protective barrier.

Salem then parks her whale on Atlas’ floating island, spewing out a river of Grimm, including the Apathy! Our heroes, including a horrified General Ironwood, can only watch as the Grimm begin their invasion. Considering all of his allies are either fugitives, in jail, elsewhere, or likely in a burning crater, Ironwood is all on his lonesome with no one else to blame, blinded by his own fear and paranoia.

Cinder’s backstory was well-explored, defining a lot of her character traits, making her a little sympathetic. Hopefully, we shall explore more of her past, such as how she fell into Salem’s service. Though given another opportunity by Salem, Cinder’s time in the witch’s service may be running out. The same could be said for how long Emerald and Neo stick around as well. Cinder’s actions mirror those of the Madame, mistreating Emerald, unappreciative of her devotion. It was refreshing to have RWBY’s main antagonist get fleshed out, though further exploration and development is still a necessity.

What were your thoughts on this episode? Was Cinder’s backstory satisfying or disappointing? Leave a comment below, or on our Twitter feed!