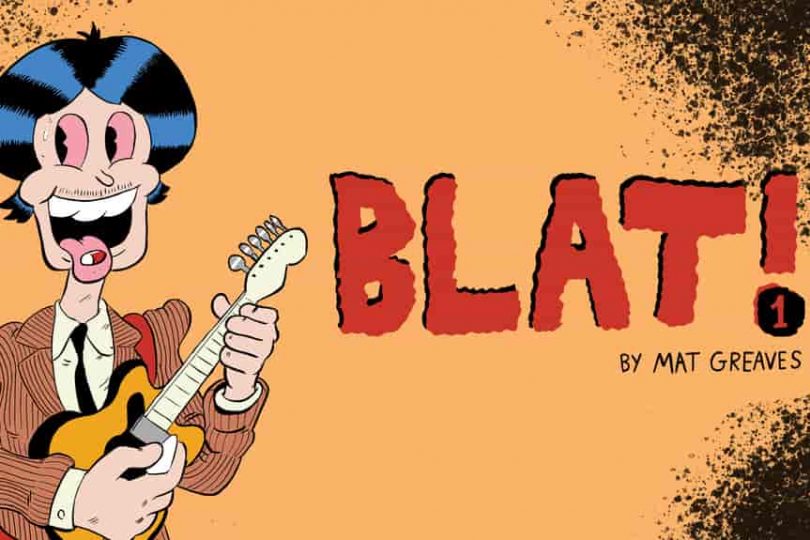 BLAT! is a one man anthology currently being kick-started by creator Mat Greaves. Consisting of five separate comics of varying lengths, art styles, and themes, BLAT! Is an exploration of Greaves’ own experiences, comic history, slapstick comedy, and nihilistic relatability.

The first comic is a short introduction to Greaves’ himself. This comic shows the cynicism he finds in his chosen profession of cartoonist and it sets the theme for the other works in this anthology. That theme being “work and play.” But it’s so much more than that, and in its entirety the anthology is funny, smart, nostalgic, and just a tad depressing.

Gone Swimming follows four mates out for a night of drinking, fun and music. Though the music sucks and they aren’t having that much fun. The interactions between the friends is exactly what happens in a night out in the pubs. It is a drunk mess of dumb conversations and promises of “just another drink.”  But it really works. It has the constant reminder that growing up kinda sucks, but it’s important to keep living and having a good time.

Similarly on the theme of work we have No one wants to be here! It is a four page reminder that your work may suck, but so does everyone’s. It is bleak, far too relatable and hilariously accurate. The style is reminiscent of a 1950’s company training video, which works perfectly given the theme. It hits on similar notes as Gone Swimming, by convincing readers to not think so much about work and just have a good time when you can. As Futurama once said “A mindless worker is a happy worker! Shut up and do your job!”

The next story is Oh Boy! – Where a punk rock fan decides to go see his favorite band play live. This comic strays away from work and decides to go all play.  This comic is probably the one that made me laugh the most simply for its unapologetic silliness. Greaves decided to turn up the slapstick to one hundred percent here and it was a great decision. It also made me really appreciative of the decision to make this an anthology. It allows Greaves to shift between so many styles and traditions while stitching together one fantastic piece of work.

And finally we have Albert, who is the old drunk who basically lives at the bar. My favorite work of the bunch, as it is hilarious and also hits very close to home. It is funny how often I’ve seen guys while tending bar myself. Albert and the bartender have an expertly written dynamic. I also loved the touch of Albert’s handwritten drunk speech bubble, which made me realize that I am way too American to understand drunken English.

The final page of the anthology showcases fake ads, prior work, and a small comic called Commute. Overall BLAT! Was an expertly written and drawn comic. If I had been told from the beginning this was a collaboration project between a few creators I would have easily believed it and that shows Greaves’ impressive range. He put a great idea into action with this comic and had the writing and drawing chops to back it up.

Check out BLAT! On Kickstarter here. Did you enjoy BLAT! ? You can find the comics to purchase at Greaves’ store here. Which comic was your favorite? Sound off in the comments or send us your thoughts on Facebook or Twitter!