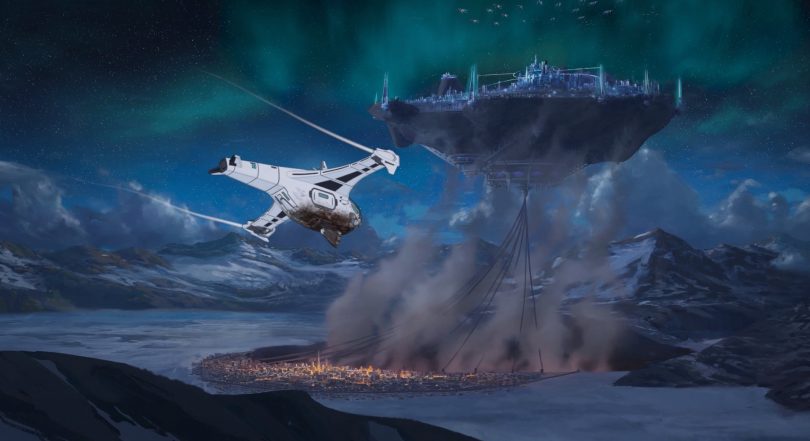 The eighth volume of RWBY has taken many unexpected twists and turns: A surprisingly low number of casualties, Ironwood taking centre stage as the main villain in favour of Salem, which characters would defect. On the other hand, the long awaited plot resolutions are equally as vexing. Who will get the Relic of Creation? How will Penny escape her virus-induced fate? How will the war for Atlas be concluded? The twelfth episode “Creation” answers these questions with surprising, complex, but superb revelations.

The episode begins with General Ironwood and the remaining Ace Ops getting ready to take Penny into custody. Qrow and Robyn infiltrate the academy’s hangar to stop the bomb being loaded for Mantle’s destruction. Winter diverts the Ace Ops to stop them. Winter asks Ironwood about his decision making, though he shuts her down. Penny flies in, Winter putting her in shackles, whilst Ironwood inserts both of his pistols into a larger weapon that may be an energy cannon. But, he puts his guard down when Penny reinforces her goal is to open the Vault. It is likely Ironwood does not know about Penny’s order to self-destruct.

Not that it matters, since it turns out Penny is actually Emerald in disguise, having used her illusions to cloak herself and Team JNPR. Emerald then proceeds to give Ironwood the most satisfying kick to the face ever, vanishing with his weapons. The group then proceed to kick Ironwood’s ass, Winter joining them, finally making her allegiances clear. Though the battle is short, it is very gratifying. It ends with Winter doing a Mortal Kombat­­-esque move to break Ironwood’s aura, knocking him out. Concurrently, Marrow helps Qrow and Robyn by paralyzing the other Ace Ops with his own semblance. Elm and Vine were just about to defect, although they might join Team RWBY willingly when they learn what is happening elsewhere.

We go back in time to the minutes between the end of the last episode and the present. The gang make their plans to dispose of Ironwood, and access the Vault to acquire the Relic of Creation. They have two aims – to save Penny from blowing up, and to evacuate the people of Atlas. This is necessary, as if the Relic is given a new command, then its current purpose will cease. In this case, it would mean Atlas would fall from the sky. Winter and Marrow were recruited by Weiss, and ran into Qrow and Robyn last episode.

Ozpin confirms that the Relic of Creation has its own spirit like Jinn, named Ambrosius, who is described as a craftsman. In order to properly use the Relic, he requires an idea of what to create, and the use of blueprints would be handy. Returning to the present, Team RWBY and Penny enter the Vault by cleverly using the hole that Oscar blasted through the bottom of Atlas last volume. Opening the Vault, Team RWBY zoom inside, grab the Relic, and summon Ambrosius, a buff, charismatic artiste, who is easily wowed by new technology. Ambrosius is a very likeable character, taking his name from a possible surname of Merlin.

They ask him, through some wordy dialogue, to duplicate Penny’s robotic body, keeping the virus inside, but separate her soul. It turns out Ambrosius cannot destroy what he creates, and will have to improvise when it comes to handling Penny’s soul. Doubling as the Blue Fairy, Ambrosius separates body from soul, turning Penny into a real girl. Her first vision in her new body is to witness her old body succumb to the virus and self-terminate. Not that that stops her from embracing her newfound humanity, glomping everyone in sight. Imagine her reaction when she notices she has toes.

Team JNPR, Oscar, and Emerald try to send a live message out to Atlas and Mantle about the city’s inevitable fall, only for the network to go down, likely thanks to Watts. This leaves the citizens with only the information that Atlas is falling. Winter locks Ironwood in a prison cell, where her father Jacque still remains. Winter informs him that both of them will be moved to a safer location when the time comes, telling her estranged father that this act of kindness comes from Weiss.

Back in the Vault, the next stage of the plan is crafted to evacuate everyone. Where to? Vacuo, of course. To progress the story, it is a logical move. But, it seems almost unrealistic to transport the millions of Atlesian citizens to the hot, barren, unforgiving deserts of Vacuo. Although the destination is a bit weird, the method to transport them is unique. Using blueprints of Atlas, Ambrosius creates a portal system within the bounds of the Vault, appearing before all of the citizens. Presumably, the Happy Huntresses were informed of the plan, as Joanna steps through without issue.

Ambrosius does mention two important things: Once a person goes through a portal, they cannot go back the way they came; and the foreboding warning of “Do not fall.” This implies that this dimension between realms is a bottomless pit, and if were one to take the wrong step, their fate would be very unfortunate. Naturally, this means that someone is going to take the plunge, and with Cinder lurking in a crowd, things are going to be bleak in the finally two episodes of Volume Eight.

Did you enjoy this episode of RWBY? What will happen next? Who will fall? Leave a comment below, or on our Twitter feed!