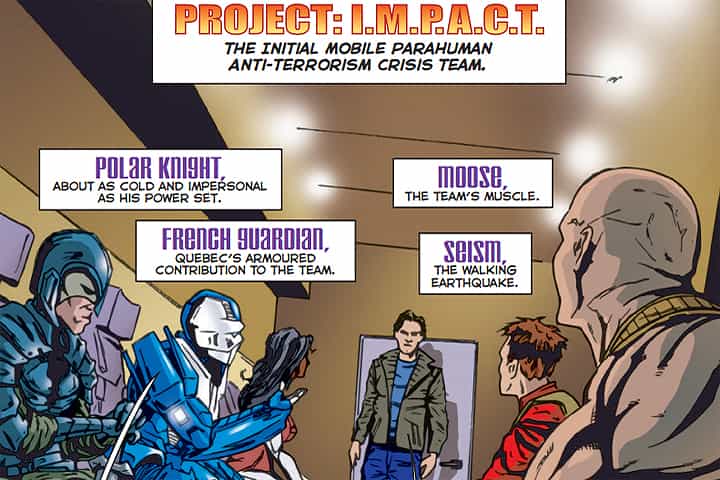 Written by Alan Russette, colored and lettered by Gary Scott Beatty, and illustrated by Stephan Petersen; Project I.M.P.A.C.T. introduces us to a detailed and interesting world of superpowered individuals. There is perhaps a less-than-pretty undercurrent hidden beneath the surface provided.

Starting right out of the gate, the comic throws the reader into the action with a hostage situation. “Parahumans”, or superpowered individuals, take control of a power station in Ontario. There’s nobody to stop them. Enter Project I.M.P.A.C.T. and its members. They swiftly defuse the situation, save the hostages, and capture some terrorists. All at the cost of two criminals getting away. This introduction to our main characters serve as a very good way to showcase what they can do. It also gives us insight into their personalities through their dialogue.

However, one of the most interesting parts of the first issue comes from the last two pages. We see a conversation between two men named Rasmus and Mr. Hatcher. They discuss last night’s “failure”, and allude to a “project”. A full page panel follows, showcasing men and women lifting weights while figures watch through a window.

The second issue is colored by Linda Scott Campbell and lettered by Richard Lumsden. In this issue, Pulsar is thrown into some very “heated” action. Additionally, we receive more insight into the life of Seism; our earth-shattering, ex-operator friend previously introduced, but has yet to see any action. This is because he has very little control over his earth-moving powers, leading to the demolition of his surroundings. This issue ends with another scene of Rasmus, as well as more information on this unnamed “project”. Rasmus wants to create parahumans, and is working towards this goal for reasons still unknown.

The existence of this mysterious project and the nature of Rasmus leave a lot of questions. But what really draws me into the story is the idea that parahumans can be created. And everyone is doing it too! Not only have Rasmus and our antagonists seemingly been successful in creating a parahuman, but we find out that Seism was given powers by the Canadian government – specifically through experimental genetic manipulation. This plot point can have very large implications. It’s exciting to see where this idea leads to in future installations of the comic.

While we are learning more about the origins of Seism, I still have questions about the rest of the team. Where have they come from? How did they develop their powers? Nevertheless, the first issue serves as an amazing world-building tool to the comic’s overall lore. The second installation does not betray expectations either. I’m sure that with time, characters and their lives will be expanded on.

What do you think about the characters and world of Project I.M.P.A.C.T.? Would you like to see the story continue from here? If you are, Project I.M.P.A.C.T. is available on Comixology! Once you’ve read it, let us know what you think of it; sound off in the comments or send us your thoughts on Facebook or Twitter!