Home » “The Burning Lotus: Origin Story” #1 Offers A Fearless Vision And A New Superhero: A Review And Conversation With Adam Elara 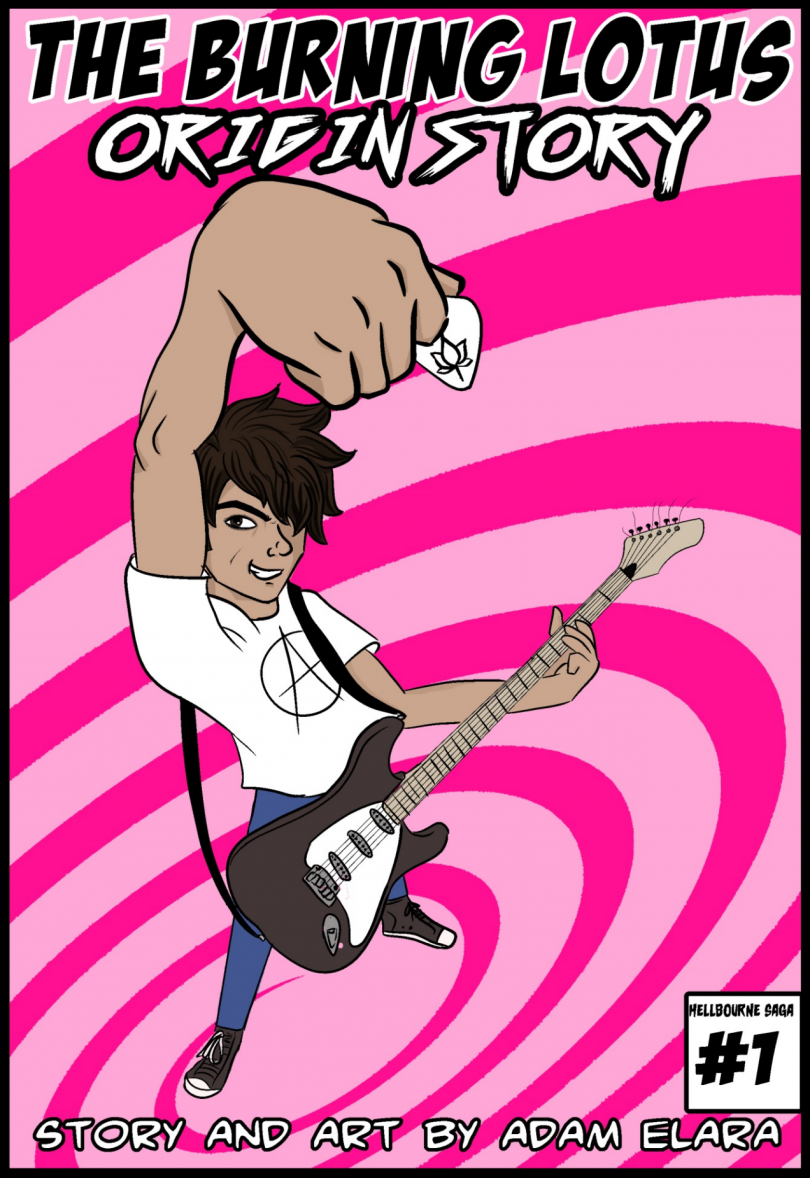 Who is Adam Elara?

Adam Elara is a quadruple threat as an actor, musician, illustrator, and author. The Burning Lotus: Origin Story #1 serves as his first comic coming from his concept album titled Origin Story. Growing up a comic fan, Elara read anything he could get his hands on. This included a comic novelization of Robocop #2, the adventures of the Marvel superhero Moon Knight, and various manga pieces. He plans to split his vision into three albums and have it span over multiple comics. Elara stylistically attempts to find a happy medium between the two worlds he grew up reading.

Told through the eyes of the narrator, who shares the same name as our author, the plot pulls no punches right away. According to Elara, “some of this story is autobiographical”. This is surprising to know, especially with what the main character endures. For example, the first scene shows Adam – also a young musician – running from bullies throwing rocks at him. That scene is not at all fiction. Unfortunately for Adam, it doesn’t get any easier throughout this story as he goes through one very bad day. Joker-level bad. Maybe even worse.

Things get worse before they get better for our main character. The issues that he faces aren’t mere coincidences. Adam’s entire support system unravels both at home and at school. This allows our author to dive into some complex themes of racism, faith, and depression. As Adam suffers from constant racial abuse at school, his home-life is not any easier. Coming from a conservative Muslim family, Adam’s parents often try to reform their son. But they attempt to do so by forcing faith down his throat, with religious figures that they assume to be perfect. That is far from the truth with characters such as the Imam in this story.

Elara’s criticisms of Islam are bold but essential to the plot. Because as he states, this is not meant to “fuel a fire of bigotry, but rather shed a light on criticisms that need to be set regardless of what you believe”. Themes like this one are key to the story’s core and show Elara’s vision fully-realized. The main character’s parents constantly want him to live up to their perfect image of a son. Adam on the other hand, just wants to jam as the lead singer of a rock band. But similar to the life of a lotus, “from dirt, beauty rises”. We leave on a major cliffhanger at the end of Elara’s first comic book.

I’m really doing my best not to spoil everything. But let’s just say that the hero that is emerging from this story comes from a background that we haven’t seen in the past. And this is one of the reasons why Elara wanted to convert his concept album into a comic. “There aren’t really any superheroes from my ancestry. And I thought to myself, well – I should make one because no one else will,” Elara states, and he’s right. We do need that type of new hero. And this is exactly the kind of backstory that can help shape him.

This text is not for the faint of heart and explores some very dark themes. But a lot of readers can relate to some of the struggles that Adam goes through. He has faults but this is a character that faces multiple hurdles that continually beat him down every day. Additionally, there is a page in the middle of the comic that provides some powerful meta-commentary on death and social media. This is very relevant to the current pandemic taking place within the real world.

There’s a lot in store for Adam Elara and The Burning Lotus going forward. In fact, Elara plans to turn the second part of his concept album into an animated story. And part three might be a video game depending on how things go with the first two albums. Still, Elara right now is focused on converting his vision into the comic world. All the while, Elara is continuing to make music and pursue his acting career.

Overall, The Burning Lotus is a fearless first comic for a new author who presents a bold, engaging vision. With the possibility of many sequels going forward, it’ll be interesting to see what Elara has up his sleeve. The only thing that I would advise Elara to take precaution of is when he goes into the water. Because, according to him, he almost drowned in a riptide a few days prior to this interview! We need answers to the cliffhanger this first issue ended on!