Home » There Is Terror Up In The Mountains In “Clodagh” #1 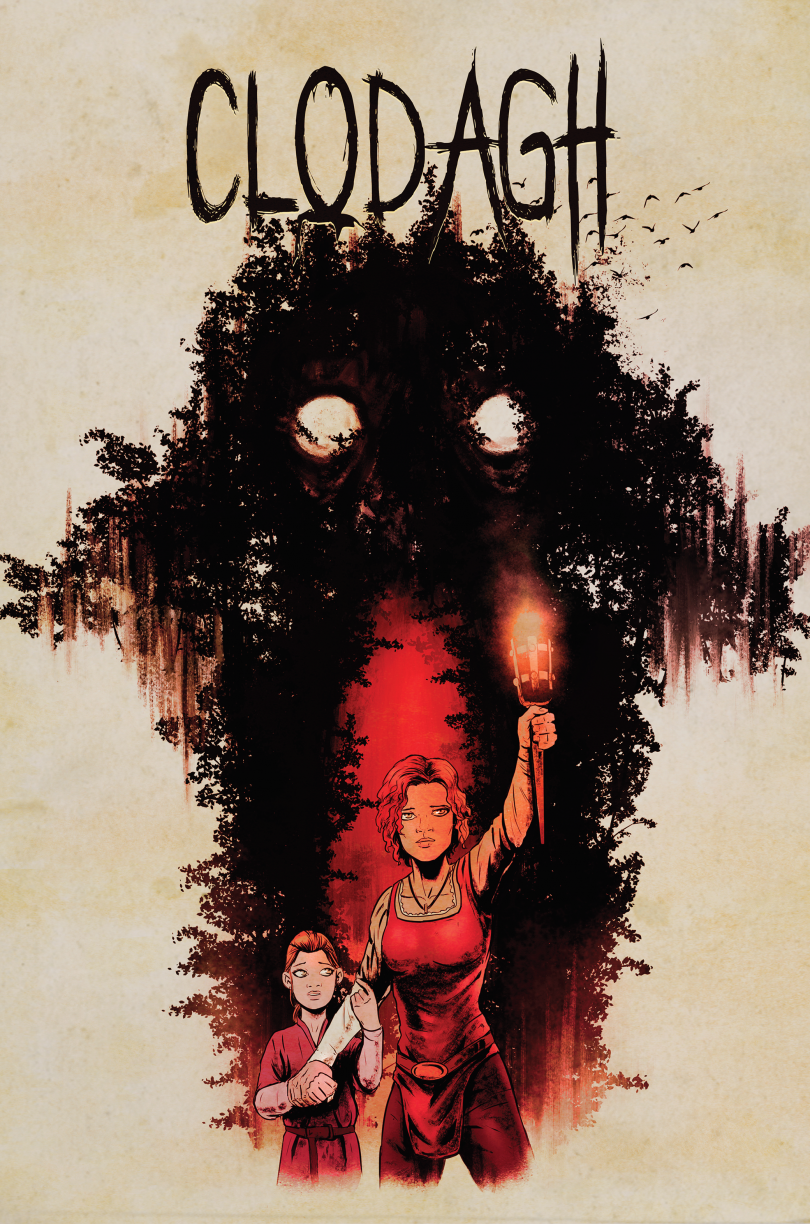 When a witch terrorizes a small mountain village – dismembering and decapitating locals while searching for a man named Fillin – someone has to stand-up and fight back. That woman is Clodagh; a traveler and warrior whose relationship with Fillin is the talk of the town. As the Witch descends upon the town, she kills a wedding part and kidnaps Fillin’s daughter. He now must set out to find and rescue her, even if that means leaving Clodagh behind.

Clodagh #1 is a proud horror story written by Simon Birks. It doesn’t shy away from gore and terror. Having a villain like the Witch makes horror a necessary evil in this kind of storytelling. The Witch clearly enjoys tormenting humans; feeding on their eyes and bodies is clearly as necessary as feeding on their fear. Even her speech bubbles stand out from those of the other characters, symbolizing dread. Her ghoulish figure and soulless eyes are the stuff of nightmares. Artist Willi Roberts should be immensely proud of his work; the moments where the Witch is terrorizing and killing are the standout moments of this first issue.

The Witch is the foil to Clodagh who shines in her bravery. Clodagh confronts a whole village of brainwashed men in order to protect her adoptive daughter, Aine. She embodies a traditional warrior in her attitude and bravado; quick to anger, foul-mouthed, yet brave and loyal—even willing to comfort someone while suffering from great loss herself. The Witch may steal the show, but this is Clodagh’s story. When confronted, she easily proclaims she has no fear of the Witch—and the Witch knows it. On the other hand, Fillin is a character I am most excited to learn more of. He seems to be the doting father and loving husband type. Yet still, much like his wife, his past remains unknown. Considering the Witch wants him dead and he travels with a talking dog, his character is worth exploring.

Clodagh #1 ends far too quickly. The dialogue is concise with many things happening simultaneously; the story seems shorter than its given 22 pages. Moments like the last three pages – where Fillin is seen in the woods, cold and alone – pack much even though not a lot is said. For example, the first three pages – with the Witch and her prisoner – puts a character against an unknown horror. This allows for that one-on-one connection. Moving quickly is hardly a bad thing in a first issue. There is clear depth and story to unravel in Clodagh’s main cast; many things that need to be said or not said, and character motivations coming to light as the series progresses. That is to say, if wishing I have more of the series is the only problem, then it’s hardly a problem.

There is a deep mystery within the dread of Clodagh #1 and I look forward to seeing it unfold. From the start, it’s obvious this is a horror story worth losing your head over.

Intrigued? Find more info on Clodagh #1 via its Kickstarter page! Already read it? Let us know what you think and sound off in the comments or send us your thoughts on Facebook or Twitter!