Home » Exploring Neil Gaiman’s “The Eternals” Before Their MCU Debut 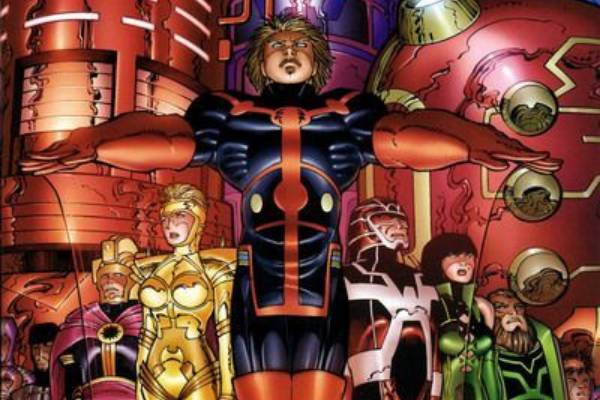 Neil Gaiman reintroduced the Eternals to Marvel readers in a bold story that could inspire their future entrance into the MCU as the new cosmic powerhouses. With five months to go until the release of Eternals, we have one trailer that gives us some idea of what to expect when compared to a popular run from the comics.

Lately, when new characters join the MCU, fans are quick to ask where they were during the previous films. Gaiman’s run on The Eternals answers this by showing us that each Eternal has integrated into society under aliases to protect themselves. Thena (who will be played by Angelina Jolie) works as a scientist for Stark Industries while Makkari (Lauren Ridloff) is a medical intern, for example. Given that the Eternals wore modern clothing in some shots of the video, most likely they were on Earth throughout the events of the other movies but have not stepped up to become its protectors like the Avengers did.

Gaiman starts the series with the Eternals having no memories of their history or abilities, instead settling into ordinary lives on Earth. Ikaris (Richard Madden) is the first Eternal to regain his memory and attempts to help the others remember who they are. Ultimately, the group’s unexpected reunion triggers their recoveries and the return of their powers. This allows the readers to discover who the Eternals are along with the characters themselves. This will likely be replicated in the film to introduce the Eternals to a new audience. Even if this approach is avoided, it works in the comic arc to help learn each character and their abilities before they reunite as a team.

Whilst The Eternals were first seen in 1976, Gaiman had the task of bringing them up-to-date with the rest of the Marvel Universe in 2006. This included showing their connection to the Celestials and their ongoing enmity with the monstrous Deviants as the Eternals regain their memories and power sets. We know that both of these races will appear in Eternals, so drawing from an existing story arc that explains their history makes a lot of sense. It is possible that the MCU will adjust their origins to match the previous appearances of the Celestials, but Gaiman’s story assumes that the reader has not seen them before so it acts as a good introduction.

Finally, this story arc shows why the Eternals are needed in the Marvel Universe. It introduces concepts like the Celestials judging humanity and larger cosmic threats being attracted to Earth after the Eternals reappear. With Phase 4 of the MCU exploring a post-Endgame landscape, we can expect the rest of the galaxy to start paying attention to Earth after removing Thanos and his forces. Gaiman highlights that whilst the Eternals handle different problems than the Avengers, their role is important as the protectors of humanity who have lived long enough to see why it is worth saving. He understands what makes them different from the other superhero teams and uses them to expand both the past and present history of Marvel.

Overall, Gaiman’s take on the Eternals is recommended reading to see who the characters are before the film release. Whilst there are earlier Eternals comics and a reboot series released this year to read, they are less friendly to new readers and require wider knowledge of the Marvel Universe to follow along. This is why the 2006 series is a good place for film fans to start reading before the Eternals join the MCU in November.

Have you read Neil Gaiman’s Eternals run? Do you think the Eternals will be used differently in their film debut? Sound off in the comments or send us your thoughts on Twitter!