Home » “Jimmy’s Vendetta” Part One Has Violence, Gore And Smoke 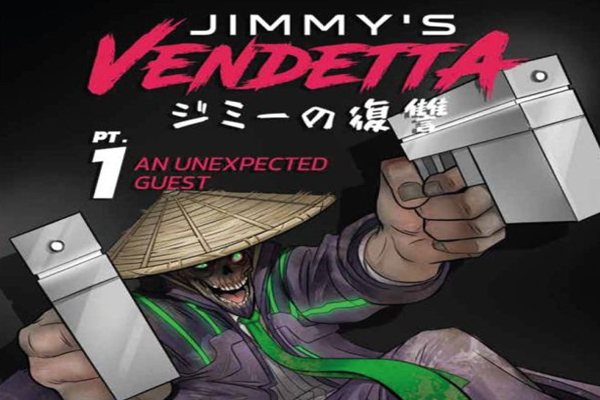 Jimmy’s Vendetta is a new graphic novel from Blue Fox Publishing. They have previously published other comics such as Hexes, Robyn and The Girl in the Midnight Gown. Written by Luca Palumbo, with art, letters and colour by Christos Kyriacou and Darja Rattik; Jimmy’s Vendetta has been overwhelmingly supported via its Kickstarter where it almost tripled the original goal.

Welcome to Neosaka 2189, one of the last remaining cities in the world. Following a nuclear fallout, ancient creatures and Gods roam the Earth, wielding their destructive power.

Vinny is an underboss for Don Kronos, an ancient Titan who is the crime kingpin in the city. Tonight is poker night at Vinny’s but unbeknownst to him, an unexpected guest turns up. Jimmy the white: a man on a mission, a mission fuelled by revenge.

Jimmy’s Vendetta Part One throws the reader right into the story. As someone who has never heard of this comic before, it is rather jarring. However, quite understandable why the comic begins in such a specific manner; it rightfully assumes the reader will likely have some preconceived notion as to what its contents are all about. That said, even coming in as someone with no idea of what the plot is, it’s easy to grasp and understand.

The art style for this graphic novel is absolutely fantastic; I cannot praise it enough! Jimmy’s Vendetta manages to mix both cyberpunk and noir seamlessly. And yet still, it maintains a classic Japanese fashion to it. The novel also does not shy away from its very explicit depictions of violence; gory in parts, and not for the weak of heart.

However, one of the most interesting and unique art choices is the use of smoke with Don Kronos. In one particular panel, we see the character’s cigarette smoke mix into his moustache. This imagery depicts the character’s rage, as if he were a bull. This is then used again a few frames later on; smoke rises above Don Kronos, giving us a hazy image of Neosaka. This signals what the character is thinking about at the time.

Despite my praises for the art and the plot, this graphic novel in general is far from perfect. As mentioned earlier, the jumping right into things provides a bit of a whiplash. I feel it would have been better if the blurb description was on one of the first pages rather than the last. Some of the dialogue is also a bit clunky in places, with characters repeating the same words and phrases soon after the other. This breaks a common writer’s rule.

These criticisms are of course, easily forgivable, seeing as this is just Part One. Ultimately, Jimmy’s Vendetta so far offers a very interesting story with a unique world. It has a great art style which is visually pleasing and entertaining. While the graphic novel itself may not be my “cup of tea”, I believe that anyone who is interested in this particular genre should definitely check it out!

Have you supported Jimmy’s Vendetta Part One via its Kickstarter? Will you be checking out the future of this graphic novel? Don’t forget to let us know what you think down in the comments or on Twitter!