Home » “Nightmare Man” Brings Your Nightmares Into The Waking World 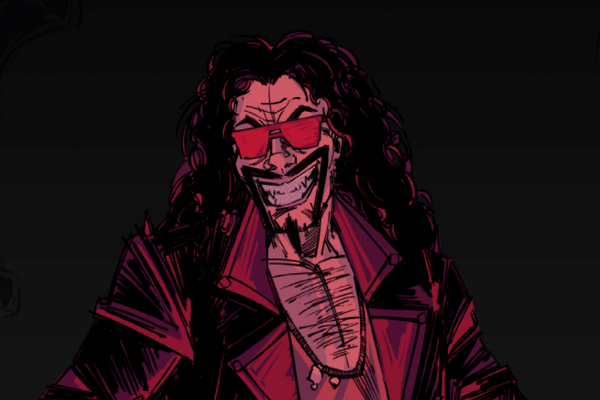 He’s here, he’s fear, and he’ll make your life a living hell. Nightmare Man explores the nature of nightmares and how it affects Alex, a middle-aged man haunted by his past. Matthew Wilding and Matt Rowe come together with writing and art respectively for this project. This includes the aforementioned Nightmare Man, and a shorter comic titled Little Things. Both are standalone stories; self-contained and spooky in their own ways. So let’s break down what makes both of them the stuff of childhood terrors.

Nightmare Man is the longer of the two, standing at 24 pages. It follows a man named Alex. One day, he sees a man in a café that looks identical to the man from his childhood nightmares. We follow Alex as he tries to tell his therapist about the connection. As a result, he confronts the mysterious “Nightmare Man”. In such a short amount of time, we learn so much about Alex, as well as the said Nightmare Man now haunting his waking days.

Meanwhile, Little Things is a third of the length. But still, it manages to convey a lot of information in such a short amount of time. This comic follows Bill throughout his childhood and early adulthood. There’s an abandoned mental hospital in his town, and former patients roam the streets living their own lives. It’s a perfect blend of unsettling psychological horror, and the inevitable terrors that come with growing up. At first, I thought it was a continuation of Nightmare Man – since there is no divide between the two stories. In spite of all of that, both narratives are incredibly fascinating and unsettling in their own unique ways.

One of the most interesting things about Nightmare Man is how he fits so perfectly into the world. Without spoiling what exactly he is, he looks and acts like a normal guy. He likes reading the newspaper in the morning, enjoys a good cup of black coffee, and really likes scones. Sure, he dresses like a heavy rock band singer all the time. But I bet the people working at the café have seen weirder stuff—who knows? Maybe Nightmare Man’s leading a double life. By day he’s touring the world with his band, by night he’s feeding kids bugs and hanging them over fires so he can feast on their fear. Perfectly normal stuff!

Alex, meanwhile, fits into the world in a much different way. He’s a normal guy, all things considered. He goes through life as any normal person does. Although served a bad hand, Alex works through these things with his therapist. The only “abnormal” thing about him are his childhood nightmares. He remembers them all so vividly, and he almost doesn’t talk about them because of how badly they scare him. It’s clear that while these nightmares are seemingly harmless creations of his subconscious, they affect him even to this day. And especially now that he has seen the man that haunted those nightmares walking around in the real world—yeah, I would be terrified too!

Nightmare Man is perfect for anyone who likes a good horror story. The buildup is worth the wait, and it sucks you so quickly into the world. It’s easy to understand and enjoy, even if you’re not the biggest of horror fans. The art is fantastic, and there’s a scribbly quality to it that’s equally unsettling and pushes the story forward. If I have to compare the story to anything, I would liken it to Neil Gaiman‘s work.

Overall, Nightmare Man deserves so much praise. Finely crafted, self contained; the story is frightening and entertaining. It even applies to the real world in a lot of ways. I know I still walk around with vivid memories of nightmares I had as a child. Luckily, none of them involve a wannabe punk rock singer, so I’ll count my blessings. Let’s just hope we don’t see him at our local coffee shops sipping black coffee and reading the newspaper.

What did you think of Nightmare Man? Do you still remember any of your childhood nightmares? Do you think Nightmare Man has a wicked sense of fashion? If you’re interested in checking it out, Nightmare Man is available for purchase over at Gumroad. You can also find more information about the comic and the team on its funded Kickstarter! Let us know in the comments or send us your thoughts on Twitter!