Home » “Lethophobia: The Fear of Oblivion” is an Unsettling Experience 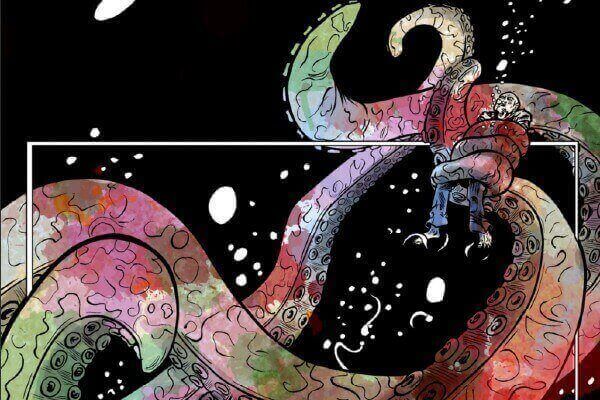 The graphic novel Lethophobia: The Fear of Oblivion by Asher Humm contains six seemingly unrelated stories that share a disquieting outlook on life. But unlike most anthologies, these stories are linked together by a seventh story: a young man waiting for a delayed bus. While featured characters eventually cross paths with this character on his way to work, it is unclear if these stories are actual occurrences or the result of a lively imagination. Whatever the case may be, the interconnectedness contributes to the unique flow that each story shares in the comic’s foreboding atmosphere.

Overall, the art style leaves an immediate impression. Humm utilizes muted colors in combination with a realistic art style and cross-hatch shading. This style contributes to the gloomy and unsettling atmosphere. The narratives also are heavily reliant on the art sequences since many of the stories use dialogue sparingly. In fact, the final story, “Vampires,” is a silent story. Still, despite some of the bizarre events of the graphic novel, the art emphasizes a mundane existence for these characters.

The first story in the anthology, “The Burden,” also helps sets the mood for the successive stories. It features Emily, a woman unfazed by the chaotic world falling apart around her. The panels include news reports that serve as reminders of the conflicts in the world. The reader also catches glimpses of the adversity that trigger her co-workers. Despite that, Emily’s diary entries breeze over the many problems that surround her, and she remains hopeful. Because of this outlook, Emily is constantly trying to support others through their breakdowns. This desire to help others consequently leads Emily to accept the burden of absorbing some of the world’s anxiety. And, ultimately, she caves into the pressures of the outside world.

The rest of the stories also maintain a survival theme. Which balance both the ordinary world with dangerous science fiction adventures. For example, in “The Adventures of Dorian Tesla,” an older spy fights his way through evil scientists and a giant squid. This story is particularly gory, but it also contains a sense of humor since the spy is technologically challenged and struggles to use his smartphone.

In addition, the metafiction in this comic is very intriguing. The anthology uses the story of the young man at the bus stop to transition between stories smoothly. At each interlude, his narrative progresses, and events he encounters trigger another story. For instance, a book report our main character starts reading in a newspaper helps initiate “The Last Sun”. Interestingly, “The Burden” is also part of that book report and harks back to the first story in the anthology. Later, the giant squid from “The Adventures of Dorian Tesla” comes into view as a portrait on a passing bus.

Another unique trait of Lethophobia is that characters appear when going about their business in the background of panels. For example, Dorian Tesla at one point emerges as a bloody mess, searching for a phone booth, in the background of “Vampires.” This technique helps guide the reader through the anthology while simultaneously suggesting that the fantastical events occur in actuality.

Overall, Humm’s Lethophobia is definitely thought-provoking. The anthology carries important themes like survival and anxiety. Although the graphic novel combines random stories of various genres, they all link seamlessly by the overlapping narrative and common themes. If Lethophobia: The Fear of Oblivion sparks your interest, be sure to check out its Kickstarter here and let us know what you think.

So what did you think about Lethophobia: The Fear of Oblivion? Sound off in the comments, or send us your thoughts on Facebook or Twitter!