Home » “Halloween Kills:” The Curse Of The Middle Chapter 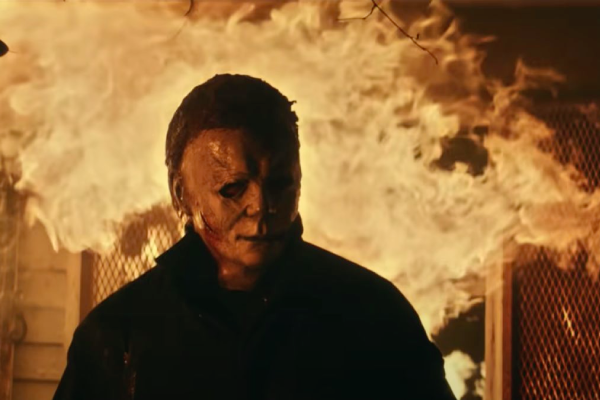 It’s been a three year wait for Halloween fans, but for Laurie Strode, mere moments have passed. Strode and her family speed away from the scene of their run in with murderer Michael Myers, exhausted but victorious. Or so they think…

It’s always fun to watch Jamie Lee Curtis return to her most iconic role, and it’s clear from her social media posts that she’s having a blast. She’s as vital a part of the marketing campaign as Myers, yet this time she’s mostly out of action. Mirroring Halloween II, she spends most of the time in hospital. It’s one of the main missteps of David Gordon Green‘s Halloween Kills, a bloody new chapter that scares but takes some unnecessary detours.

Engaging the audience with the second part of a trilogy is always tricky, as we can usually make some safe assumptions. One being that the movie’s tagline “evil dies tonight” would be better suited for upcoming sequel Halloween Ends. After all, how do you make a horror movie without the villain? This knowledge can lower the stakes but Halloween Kills tries to combat this by cranking up the body count. Michael Myers is scary in this movie, more merciless and brutal than ever as he carves a path across Haddonfield, Illinois. Some of the kills are downright unsettling and his unstoppable nature is nightmare fuel. His strength seems supernatural, a wrecking ball to those in his path. I still prefer the tension of the 1978 original over the gore of the modern movies, but I may be in the minority.

Myers’ legacy in the town is a huge plot point in this movie. Alongside Strode’s daughter Karen (Judy Greer) and granddaughter Allyson (Andi Matichak), the film reunites the survivors of 1978. Notably, Kyle Richards reprises her childhood role of Lindsey Wallace after over 40 years, coming face to face with The Boogeyman once again. It’s a bit of fan service but as a fan of horror and the Real Housewives franchise, it’s good to see her. Also back for another scare is series veteran Nancy Stephens as retired nurse Marion Chambers. Alongside Curtis, she’s one of the few actors to appear in various retconned sequels. I particularly like the use of certain camera shots that pay homage to her first appearance.

As news of Myers’ return travels, this time the residents have had enough. They band together and decide to take action against the masked menace. While vigilante justice is an interesting concept to explore, the movie spends too much time on this plot. It’s a little heavy-handed and some details do not make sense to me. These scenes detract from screen time that would be better spent with the three Strode women. Despite this, Greer and Matichak have some great moments as resilient descendants of one of horror’s original final girls. It’s interesting to see how different generations fight back.

Overall, Halloween Kills is an uneven addition to the franchise. It remains to be seen how relevant some of the subplots will be to the final outcome but there are plenty of memorable moments. Fans of gore should be happy as well as horror buffs, with a dose of nostalgia from legacy characters. After a stronger first movie, I hope that the final part of the trilogy pulls it out of the bag. Either way, like Michael Myers, I can’t help coming back to Haddonfield for another visit on Halloween.

Have you seen Halloween Kills yet? What did you think of it? Stuck for more horror films this Halloween? Check out our Top 6 Halloween Horror picks. Sound off in the comments or send us your thoughts on Facebook or Twitter!