Home » “Asinine!” Has Stories For All 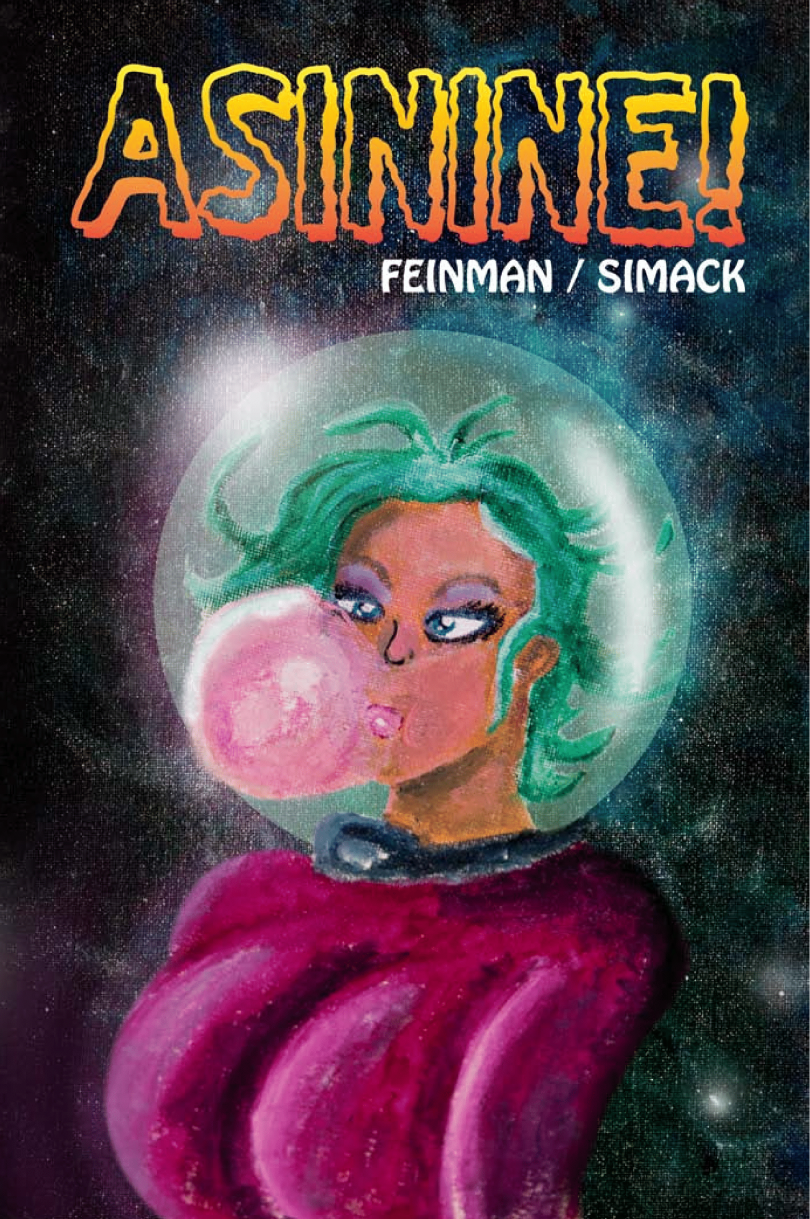 Asinine! by Anthony Feiman and Julie Simack blends sci-fi satire with Twilight Zone-esque premises to create a hilarious comic experience to transcend space and time. Firstly, we are introduced to Candia Venus who is a very ‘shapely’ woman in a form-fitting space suit reminiscent of a Bettie Page photoshoot. She acts as the guide to this comic, regaling the readers with stories from the 21st century. Still, she aggressively refuses to answer stories about herself. Think of her as a sexy version of Rod Sterling. Not to say he isn’t sexy to all the Sterling fans out there.

After Candia’s brief intro, the comic breaks into three stories. The first of which is Immortal No More! It paints a world where immortality has been achieved. A serum developed to return consumers to a youthful state uses the cells of dead bodies. As a result, a new problem arises in deciding who lives and dies. The solution? An algorithm would read all of your media presence ever, to decide if you could live out in peaceful retirement, or simply become sustenance for the next immortal.

In addition to a very morbid premise, it continues on in an even darker story. The main characters’ anguish over her stolen media presence is palpable. There is a clear emotional investment in this story for me. That is in no small part due to the art and how it showcases the characters’ pain. Immortal No More! Doesn’t try to evade darkness of the genre of science fiction, it embraces it and paints a well told visual tale of loss.

This tale is of Pamela, who braves a horrible visit to the doctor in order to find out what’s making her sick. This comic focuses heavily on themes of a broken medical system. Pamela finds herself waiting for hours at a doctor’s office. When finally seen, her problems are dismissed as hysteria and she is simply scoffed at. As far as health goes, I think we all find our newsfeeds inundated with facts and opinions. Especially on things regarding what to eat, take and do in order to be healthy. Oftentimes it becomes impossible to distinguish the real from the fake and who to trust when it comes to advice. This story plays off of these fears and reminds us that sometimes, it’s better to trust yourself.

The final story in Asinine! is Excursion, which follows Margie; a woman and her cat who simply want to get some ice cream a meager three miles away. Unfortunately, just like all of us reading, we are the only good drivers on the planet and everyone else is a lunatic. Maggie’s drive quickly becomes a descent into Dante’s Inferno, with every possible thing going wrong. However, the true victim is her poor Kitty, who really should have been wearing a seatbelt.

Overall Asinine! is an enjoyable experience from start to finish. The giant-chested host honestly caught me by surprise at first. But her bombacious looks very much work for the bit. The panels and page layout are dynamic and showcase the characters story and emotion well. The stories themselves, while all original and while separate, do play off of each other extremely well. I think Asinine! Is an extremely creative piece of media that deserves your attention.

Check out Asinine! and more Ink and Feathers comics here. Sound off in the comments or send us your thoughts on Facebook or Twitter!