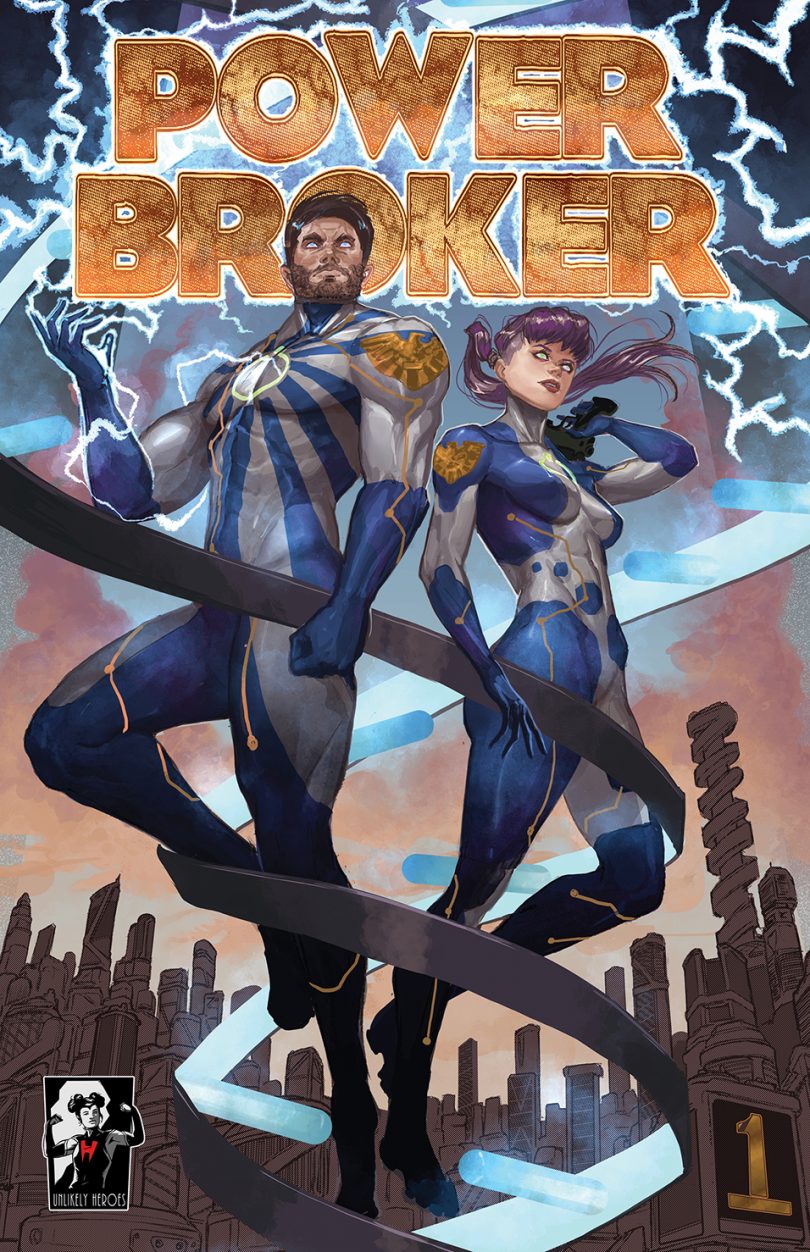 This is definitely a future that I would not want to be a part of. And reminds me of one of my favorite shows The Boys. I cannot wait for Season 3! Power Broker Issue 1: I Want To Fly tells the story of a scientific breakthrough that allows certain genetic frequencies to match up and pass on superhuman abilities to average Joes and Janes in the city of Potentia. Resulting in this form of superpowered manipulation being approved for private use. However, an unregulated black market soon emerges resulting in an overabundance of superpowered individuals. And a crime wave in this city like none other, which is where our main characters come into play.

With this explosion comes a new government agency.  The Central Brokering Agency. Which focuses specifically on cracking down on this black market and subduing participants. Bringing us to Mason Cleaver, who has powers of his own to stop this spread of illegal, superpowered activity. However, with biohackers breaking genetic blocks that were restricting the mutated effects of these experiments on subjects, larger threats loom for Cleaver. In a city that is scrambling to regulate this as much as possible as power-brokering has become a common trend nationwide.

Todd Vicino is the creator of this chaotic world. Jon Kutzer provides the artwork for Power Broker Issue 1 while HDE letters this comic. Unlikely Heroes Studies publishes this creative spin on the world of superheroes, supervillains, and those that are both or neither. One aspect of the artwork that is particularly noteworthy is the world-building of the city of Potentia. The city looks like a combination of any of the larger metropolitan areas in the world and the fictional planet of Knowhere from Guardians of the Galaxy. With superpowered individuals about making ends meet and carrying on about their lives.

Contrary to The Boys, in Power Broker‘s world, superhuman individuals are not necessarily special or superior. Instead, the reader witnesses Syndrome’s (from The Incredibles) vision. “When everyone’s super, no one will be.” And that’s practically the case here. The extraordinary becomes ordinary and powers become elaborate party tricks. Which makes this comic all the more unique and set in a somewhat dystopian society. But that doesn’t mean that some are not more powerful than others. And a real pain for Cleaver and company to control.

Overall there’s a lot to like about Power Broker Issue 1: I Want To Fly. This issue for the most part focuses on world-building rather than character development. Which makes sense in its 27-page format as we’ll get to know Mason Cleaver and his coworkers going forward. Also, his enemies and the colorful characters that roam about the city of Potentia. But, anyways, this is the kind of comic that everybody can sit back and enjoy. So check out Power Broker Issue 1: I Want To Fly and go on a journey that just getting started!

If you want to know more about Power Broker Issue 1: I Want To Fly, you can check out their Kickstarter right here. See how you can purchase a copy of Power Broker Issue 1 here and sound off in the comments or send us your thoughts on Facebook or Twitter!