Home » Interview With Russell Hillman: Author Of The Neo-Noir Thriller “My 22 Always Works” 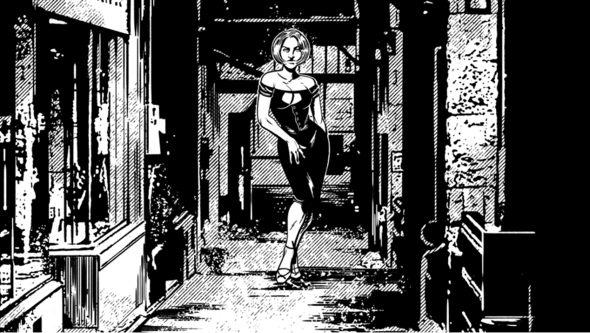 Russell Hillman pays homage to the iconic Wally Wood with his new comic My 22 Always Works. The neo-noir thriller places the reader in 1956 Chicago. It details the unraveling of a relationship amongst our main characters, building to an epic final few pages. We were lucky enough to interview Hillman on his piece and the inspirations behind My 22 Always Works. Here are his responses.

What is My 22 Always Works all about? What are the central themes that you are exploring through your story?

My 22 Always Works is a noir-tinged story of lust and betrayal.

What were the inspirations behind this comic?

The main inspiration is the Wallace “Wally” Wood poster, 22 Panels That Always Work, which is designed to help creators liven up panels of talking heads. I wanted to see if I could take those handy prompts and run with them, rearranging them and turning them into a story told entirely in splash pages, each one inspired by one of Wood’s 22 panels. A secondary inspiration would be Superman #75. It’s the final part of the Death of Superman storyline, another story told entirely in splash pages. Beyond that, the visual tics and tropes of classic film noir.

What is the comic’s style of art and why did you want to give it that style?

I wanted an artist who could handle black and white art and the interplay of light and shadow. Which I found the perfect artist in David Baf Gallart. I chose to keep the black and white stylings of Wood’s original piece, which then suggested the film noir look and the chiaroscuro elements David has managed to demonstrate beautifully.

What can you tell us about the characters in My 22 Always Works?

Our main characters are Stevie, a drummer in a jazz band, and Stevie’s girlfriend Peggy. Stevie and Peggy have an argument, Stevie goes for a walk and bumps into an old flame, Donna. The story unfolds from there.

How does My 22 Always Works compare and contrast to your previous work?

It’s a complete departure. My last three books, Slashermania, The Dark of the Forest, and Deadly Burlesque were all takes on the horror genre and full colour with multiple panels per page. My 22 Always Works is a quick read, but I’m hoping people will slow down and take in the gorgeous artwork.

Is there a sequel planned for My 22 Always Works?

There’s nothing planned but never say never. I would however encourage everyone to look at 22 Panels That Always Work, and maybe try their own take on turning them into a story. I’d love for this to become a creative challenge; I welcome anyone who wants to step up and give it a try.

Do you have any other projects you’re working on currently and/or planning to work on in the future?

My longest-running job in comics is as editor of Halloween Man and associated titles, from writer Drew Edwards. We’ve been working together for almost 19 years, and the book goes from strength to strength. Drew and I have also written a script together for an eighties retro monster story, Great White Blacktop. It’s about a car that eats people, because it’s also a shark. We’re currently in the process of getting some art together to pitch that one to various publishers.

I’ve also co-written a script with artist Jonny Padbury, which Jonny is drawing. It’s our take on the Italian thriller subgenre of Giallo, heavily-stylised murder mysteries. That one’s called The Cat Cries at Midnight. I also have an epic story about a seventies punk band with a trans woman lead singer. It’s in the very early stages of being drawn. That one’s called Flowers in the Dustbin.

Once those are done, I have multiple other scripts waiting to be drawn. In the meantime, I am available to write or edit comics. You can find me on Twitter, at @AllHellIsMrSun.

If you want to see how you can support and find out more about this project, check out their Kickstarter here! Be on the lookout for a review of My 22 Always Works and sound off in the comments or send us your thoughts on Facebook or Twitter!