Home » “The Plot” Is An Eerie Story That Explores Conspiracy 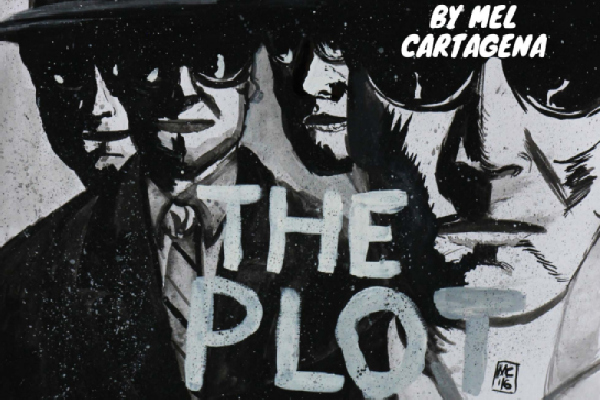 Do you ever hear news stories and think something sounds off? Like maybe there is more going on than the authorities are telling you? How about a conversation with a stranger that feels weird and you can’t explain why? If yes, then writer/artist Mel Cartagena has a story for you! The Plot is a three-part tale that follows comic book artist Raymond Corman and his interrogation by a group of suited men.

From the start, Cartagena builds intrigue as to why Corman is being questioned. I find the interrogators effectively unnerving and creepy. The fact that they all wear sunglasses indoors is a small touch. But it’s enough to make you feel like they’re hiding more than just their eyes. During this interrogation, Corman recalls an incident where he is accosted by a mysterious man on a park bench. He doesn’t know him, but it ends badly. Is Corman a mild-mannered artist, or is there more than meets the eye?

As The Plot progresses, it becomes clear that there is more at play behind the scenes. In a way, it reminds me of a spooky ghost story where strange elements move uncomfortably close towards the protagonist. Cartagena increases the tension, and it becomes very foreboding. It veers towards the territory of some of Christopher Nolan‘s films; dealing with themes of identity, lapses in awareness, and potentially unreliable narrators. All of these aspects work in the story’s favour, and I enjoy the twists and turns.

Where the story really finds its strength is in its third and final part. Without spoiling what happens, the ending brings together plot points from earlier in the story and ramps up the action. It makes you think and stays with you in the same way a good episode of Black Mirror does. The visual art style of The Plot is also simple and effective. Stripped back, it sets the mood with its black and white scheme. Using the old-fashioned typewriter font contributes to this retro feel of old crime noir. It also reminds me of a movie storyboard. The only issue I have with the visuals is that there are some repeated panels in the interrogation scenes in Part 1. While accurate to the ongoing conversation; I feel like some variation to these panels can further enhance the story.

The only time The Plot breaks its monochromatic colour scheme is when a splash of red blood punctuates a retold memory. It helps to convey the impact of this moment and reflects the raised stakes of the story. Cartagena also experiments a little in Part 3 with some elements such as a vehicle that looks like a collage with paper cut-outs. This adds an interesting texture and depth to the images. As with the writing, my favourite images come from Part 3. It has some great point-of-view perspectives which put the reader in the heart of the action.

Overall, I really enjoy Cartagena’s writing and imagery in The Plot. It stays true to the theme of conspiracies which he signals in the opening dedication. He creates a story that you can also imagine playing out on the screen, as an episode or short. The book works well as a standalone, self-contained story that leaves an impact. I’m interested to see Cartagena explore other mysterious conspiracies in future tales as The Plot is an engaging read. Put on your tin foil hat and get comfortable!

Are you a conspiracy theorist? Do you love a news story that sounds stranger than fiction? You can check out The Plot over at Gumroad. Sound off in the comments or send us your thoughts on Facebook or Twitter!