“The story of my life is not for the faint of heart. If somebody said it was a happy little tale… if somebody told you I was just your average ordinary guy, not a care in the world… somebody lied.”
– Peter Parker, Spider-Man

Just as every Superhero Film draws from the same set of characters, so too does each Superhero Film draws from the same set of plot points. Each film within a franchise follows its own formula: the first film tells the character’s origin, the second shows him nearly giving up his life as a superhero, and the third revolves around the hero’s dark side coming to the surface. The origin story plot is the most common, as most franchises currently only include one or two films. 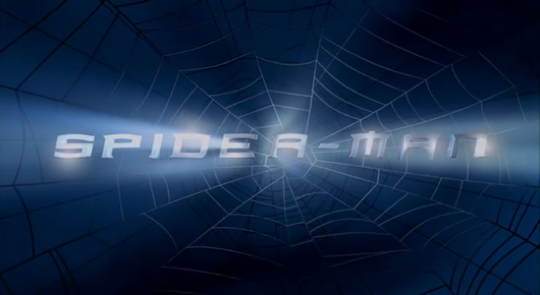 Every Superhero Film general begins with a look at the Hero before he becomes a superhero. This can include flashbacks to the Hero’s childhood or a typical day for the character in the present. The Hero is usually presented in an unheroic light. For instance, Spider-Man opens with Peter Parker missing the bus and getting pushed around by bullies. Iron Man opens with Tony Stark giving a weapons demonstration in the Middle East and generally acting like a rich ass. This is used to contrast the Hero’s later growth, but can also help the audience connect with the character. Peter Parker is your everyday nerdy teenager, a character that many in the audience will find more relatable than a web-slinging superhero.
The Villain and the Damsel will usually be introduced at this point as well. It is common for the Villain and the Hero to meet for the first time on friendly terms while the Damsel will usually not show any romantic inclinations toward the Hero. This too is to contrast their later roles and subvert audience expectations. The Confidante and Mentor can also be introduced during these early scenes.

The next step is for the Hero to acquire his abilities. The Hero will usually obtain his abilities through a single scene, but will discover and test them over a longer period. This section of the film is usually a source of humor as the Hero works to master his abilities. In addition, the Mentor is usually introduced during this period and imparts his wisdom to the Hero. The Villain usually gains his abilities at the same time as the Hero in a way that mirrors the Hero. The Villain and the Hero will start to master their abilities at about the same point in the film, learning how to use their gifts through trial and error.

Death of the Mentor:

Once the Hero has learned how to use his abilities, his Mentor will die. This death can be metaphorical, like Ducard’s near death in Batman Begins, or literal, such as Uncle Ben’s death in Spider-Man and Yinsen’s death in Iron Man. The death of the Mentor marks the end of the Hero’s training as well as spurring him to accept his destiny and become a superhero. The Hero then starts to build his new identities, both as a superhero and as a civilian. In many films, this moment is marked by a return to society, used as a metaphor to show the death of the original persona and the adoption of the triple identity.

Meanwhile, the Villain and the Damsel will resurface at this point. The Villain will reach a breaking point and prepare his first major crime. The Damsel will start to notice the change in the Hero and their relationship will start to develop. This is also the point in the film where the Confidante starts to actively help the Hero.

Act II of a Superhero Film opens with the debut of not only the superhero, but also of the Hero’s new civilian identity and of the Villain’s new identity. The Hero will begin fighting crime, usually starting small and working his way up through the ranks. This part of the film can include a montage of the Hero’s rescues. However, the Hero still works mostly in the shadows at this point, his public debut coinciding with the Damsel’s first encounter with the superhero. The Hero will rescue the Damsel in some public setting, with the Damsel promptly falling in love with her superhero.

At the same time, the Hero will also be trying out his new civilian persona, changing his behavior to hide his secret identity. This can involve just as much trial and error as the Hero becoming the superhero. Often the people closest to the Hero will notice the change in his personality, but generally write it off as a natural progression of his original persona.

Round One: The First Fight

Just as the Hero tests his abilities in public, so too does the Villain and this leads to Hero and Villain’s first fight. This fight is primarily used to set up the strengths and weaknesses of each character. In Superman, this is done extremely literally, as Lex Luthor tests each of Superman’s powers. A more typical example is the parade scene in Spider-Man, where Spider-Man and the Green Goblin face off, each revealing himself fully to the rest of the world. The Hero can never win this first fight; either the Villain triumphs over the Hero or they both retreat in a draw. This is to create more tension during their next encounter and make it clear that they are equally matched.
Down Time

Following their first major battle, the Hero and the Villain will retreat back to the shadows. The Villain usually uses this time to put the finishing touches on his evil scheme. Meanwhile, the Hero’s relationship with the Damsel will begin to deepen. The Damsel will have a second encounter with the superhero, which can either be a second rescue or another chance meeting. During these scenes, the love triangle between the Damsel, the superhero, and the Hero’s civilian identity comes to the forefront.

Right before their final face-off, the Villain will try to convince the Hero to join him and become a criminal. The Hero always rejects the Villain’s offer, although there are times when the Villain is able to trick the Hero into unwittingly committing some crime. At the same time, the Hero may try to convince the Villain to give up his evil ways and become a hero, which the Villain always refuses. This scene is used to draw the line in the sand between the Hero and the Villain, making it clear that there is no hope of either switching the other’s side. On occasion, the Villain may try to draw either the Damsel or Confidante onto his side instead of the Hero, such as Strack’s attempt to seduce Julie in Darkman.

Round Two: The Climactic Battle

Most of the final act of the film will be devoted to the Hero and the Villain’s major showdown. This usually begins with the Villain attacking/kidnapping/poisoning/threatening the Damsel and the Hero riding in to the rescue. Once the Hero arrives, he will discover that not only is the Damsel in danger, but so is the entire city (or world) and it is up to him and him alone to save the day. As the Hero goes about his duty, he will always find time to have a tender moment with the Damsel where he reveals his true feelings for her (although not always his true identity). This can include a Heroic sacrifice or some revealing dialogue.

Once the Damsel and the city are safe, the Hero will finally take down the Villain. In cases where the Villain dies, it is always at his own hands or by some accident and is never directly caused by the Hero himself. This final fight is never easy and often leaves the Hero battered, bleeding, but nevertheless victorious.

Epilogue
Like all epilogues, the end of a Superhero Film will wrap up all the loose ends in the story. The one aspect that all Superhero epilogues share is the resolution of the Hero and Damsel’s love story. The Hero will always give up his relationship with the Damsel to protect her from the danger that comes with his heroic life. This act symbolizes the Hero accepting the full responsibility of his heroic duties and destiny.

And, of course, every Superhero Film ends with a hook for the sequel.