Home » REVIEW: I Am Fire 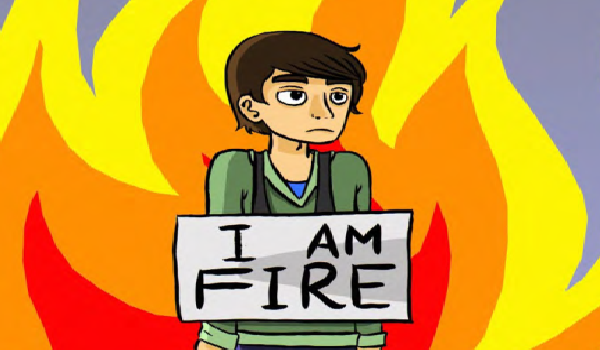 I Am Fire is a pleasingly amusing, spandex-free comic book that casts it’s mischievous eye over everyday life, somewhere in England. Not somewhere of historical significance or epic natural beauty. Good heavens, no! We have here a reassurringly generic setting. The mall that sits on the edge of your town. The screaming teenagers that sit on your bus. Don’t let the mundane setting fool you, however. In this world, events certainly transpire to give opportunity for the characters within to shine.

Let’s take Teenager Jenny, (13 ¾), for example. Her rather anxious mother has secured two weeks of work experience in the Arts & Crafts section of a local department store. This anxiety is not without foundation. Jenny has an adolescent attitude and a foul-mouth to match; as so belly-laughingly depicted in the very first panel.

The counter-point to Jenny is Chris, a rather surly, insular teenage lad who is not without issues and whose particular work experience placement is a fine moment of comedic irony. Through him we meet instructor Bryan, who’s achingly inadequate efforts to connect with “da youth” are just the start of the fun he brings to this book.

There are of course other characters with much to contribute, including curmudgeonly department store boss, Mr. Dingle; Bryan’s boss, Ben, who has his own host of personal demons, along with the added bonus of a nemesis, Claude.

What struck me from the outset is that creator Rachael Smith’s dialogue throughout this book is a thing of beauty in itself. The style is honed to express each individual and rings true and genuine each time. Distilled, prescient, funny, sometimes cynical, certainly knowing, yet revealing layer upon layer about each character as the story develops. There’s one particularly sweary moment that had me cry out in acknowledgement of its authenticity. A worthy nomination for the “Brian Azzarello Best Use of an Oyster Card in Comics – Keeping it Real” Award. Should there ever be one.

I should perhaps reiterate that this is a story set on the English side of the Atlantic. Whilst this rings true on every page, there are by no means whatsoever any cultural obscurities that would hamper anyone’s enjoyment or understanding. There is no glossary to explain terms at the back, because one isn’t required.
There’s also great characterization in Smith’s artwork, along with vibrancy and pace and lashings of comic observations; Harriet, Mr. Dingles’ P.A., munching her way through her lunchtime M&S sushi as she manages her infuriated boss; wryly humorous packaging and signage.

With Smith as the sole creator, one might expect the art to dovetail as well as it does, but the level of detail throughout the book is really very pleasing; tangents are added, reveals are made and at times, archly observed contradictions to the face-value moment are stylishly depicted. That’s when you know you’re in the hands of a noteworthy storyteller.

In its entirety, the story is beautifully crafted. Each of the characters has their moments and goes on their respective journeys. As a result, the conclusion satisfies and I for one would be shocked if you didn’t giggle, snicker, chortle and guffaw your way through this fine tale.

Rachael Smith was a name unbeknownst to me until now. This is her second story, her first, The Way We Write was published in 2012. Definitely a talent to keep your eagle-eyes on!

I Am Fire will be released on August 24. To pre-order your copy now, head over to Smith’s Etsy store here. For more about Smith’s other projects, head over to her website www.rachaelsmith.org.