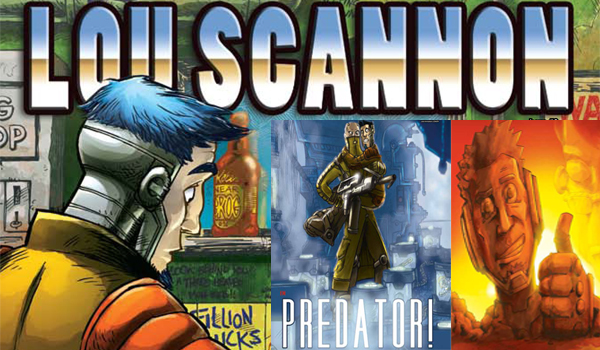 Spaceships! Adventure! Titty bars? These are the mainstays of the life of Lou Scannon (say it out loud), captain of the spaceship Raging Hormone and all around space pirate.

In the first five issues of this hilarious series, Lou and his crew face off with space-werewolves (it’s always a full moon in space!), the Galactic Coalition Police Force, and world-spanning bar crawls – and that’s just the first two issues! Parodying the likes of Star Wars, Firefly, Star Trek, Alien, and Space Balls (that’s right, it parodies the parody!) as well as many other sci-fi favourites, Lou Scannon is full of references that both the well-informed geek and newbie nerd can enjoy.

While described by the authors as five standalone issues, there is an overarching story centered around Lou’s search for his home planet, although it is subtle enough that each issue can be enjoyed on its own. However, the series is much better when read as a whole; for instance, in Issue 3 while recovering from the hangover/alcohol poisoning of the planet-wide bender detailed in Issue 2, Lou recounts the story of how he came to own the Raging Hormone to his debilitated crew. Each issue is a similar mix of arc and episodic storytelling, although the focus does tend towards the episodic.

Of particular note for me, as predicted by the wonderful creators Dan Harris, Kris Carter, and Jim Bampfield when I met them at LFCC, was Issue 4, the aforementioned Alien spoof appropriately titled “Predator”. When the Raging Hormone picks up a distress signal from a seemingly deserted ship, they decide to explore/rescue/plunder the ship, only to find a murderous monster hiding within. While this may sound like the premise of a horror story, I can guarantee you’ll be screaming with laughter, not fright. 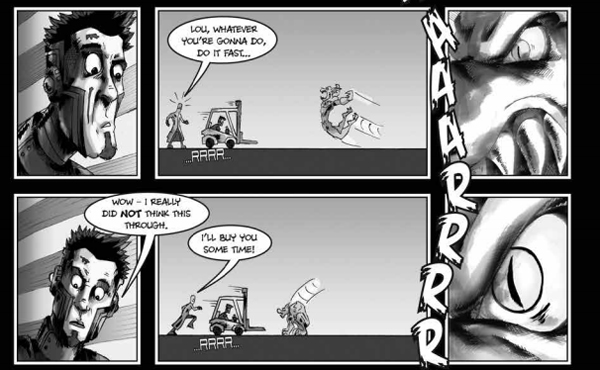 The main weakness of Lou Scannon is that while Lou himself is given a fair amount of character development (especially in the flashbacks of Issue 3), much of the rest of the crew consists of shorthanded stereotypes. There is a character introduction page at the beginning of each issue, but little more is said about many of Lou’s companions. Perhaps the worst offender is Crysta, the sexy half-human half-feline that pilots the Hormone and not much else. That said, the series is quite new and it is only by Issue 4 that we really have a good feel for Lou himself, so hopefully there will be more time to meet the rest of the crew in future issues.

The artwork, though black and white, manages to be incredibly vivid and detailed, perhaps best exemplified in the crowd scenes of Issue 2. The various aliens, spaceships, weapons, etc. are all rendered magnificently, with a cartoony flair that meshes perfectly with the humourous tone.

While perhaps not quite reaching the stellar heights of the films and TV shows that inspired it, Lou Scannon manages to be a hilarious adventure through the bowels of space. No other comic that can claim to have referenced Planet of the Apes and Ghostbusters in the same panel with such subtlety that each could just as easily go unnoticed (in the best way possible, of course). While we may only be 5 issues in (#6 is on its way!), it’s clear that the creators have plans to keep Lou Scannon in action for years to come.

To learn more about Lou Scannon and to purchase copies of your very own, head on over to LouScannon.co.uk