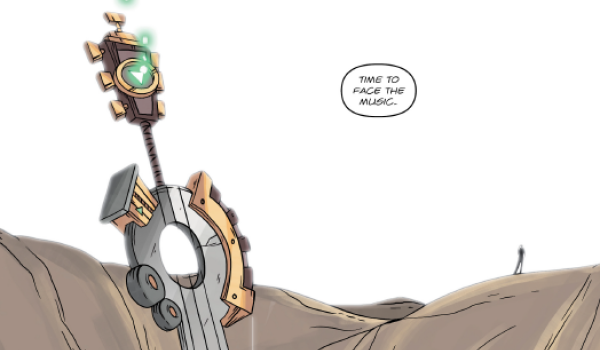 Based on our recent review of Afterlife Inc, Volume 2, it wouldn’t be much of an exaggeration to say that Jon Lock‘s series is one of the most exciting independent comics out there at the moment. An almost perfect blend of wit and imagination, the world on display here is a potent creation that, though we’re still only getting to know it, should provide a playground for many more epic adventures. It’s a shame then that, on the strength of Part 1, Heavenly Chord doesn’t yet seem to be one of them.

A crossover between Lock’s After-verse and Nich Angell‘s 7-String series, the story’s opening is certainly strong enough: three white-suited China Mieville-esque emissaries of Empyrean (hammer-, TV-, and pencil-headed respectively) are dispatched to negotiate with the newest threat to the realm but meet, predictably, with death. Jack Fortune, former con man and now all-too-vulnerable Saint Peter replacement, has to look outside his sphere of influence for help. Fortunately, with this new nemesis comes a new hero, one quite literally fallen to Earth. Shades of Thor and a CSI: Miami-worthy play on words aside, this would-be savior proves a less-than-ideal fit for the afterlife, in more ways than one.

The hero of 7STRING and new arrival in the Empyrean, Zachary Briarpatch, is on a quest to avenge the death of his mother, hunting the culprit through universes. A dynamic new addition to the After-verse, Zachary’s revenge provides a nice counterpoint to Fortune’s own ongoing journey, which is more or less to hold the Empyrean together. Angell’s artwork is clean and fresh, somewhere between manga and Saturday morning cartoon, and ties the issue together nicely.

A relatively svelte 28 pages, as opposed to the anthologies Lock’s released previously, The Heavenly Chord, Part 1, feels like a taster of this new combined flavor, but it’s one that proves occasionally a touch generic. Briarpatch is a hero in the vein of The Matrix‘s Neo or Dragonball Z‘s Super Saiyan, far outclassing anyone he comes across: he clears whole levels of the Empyrean in a single bound and takes out his enemies with one blow. With Fortune remaining mostly as a manipulative figure – there’s a nicely meta moment where he claims himself as the final boss – there’s no real sense of conflict: the two strands don’t come together till the end and the possibility of hero vs. hero never truly materializes.

Superficially, Lock’s writing is a strong as ever – there’s some good-if-not-quite-Whedonian dialogue (pardon my use of an alternate suffix to spice things up a bit) – but its never quite as compelling as it should be. One of my few concerns as far back as Vol. 1 was that character development would take a backseat to the sheer wealth of ideas; while I won’t repeat that tune, Heavenly Chord feels like more of a straight-forward actioner, lacking in some of the charm and drive of its Afterlife predecessors. This being my first introduction to the String-verse, I can’t comment on the series as a whole, though as a protagonist Briarpatch so far feels endearingly Kingdom Hearts.

With Briarpatch’s blue hair, Fortune’s perennial grin, and the otherwise amusing title (who doesn’t love a good Ninja Theory shout-out?), its never quite clear if this new series is a crossover or a spinoff, a parody or drama. The character seems to have lost some of their spirit, but given this is just Act One of a whole new series, it would be premature to rush to judgment. It might not yet have scaled the dizzying heights of fantasy set in Afterlife Inc., but with its heroes and villains now firmly in place, I look forward to seeing what becomes of Heavenly Chord.

For its entertainment value and the fact it includes a suggested playlist for while you’re reading (they even include a link to it online at Grooveshark), Part 1 is well worth *** (three stars).

Heavenly Chord will be released this weekend at the Melksham Comic Con. It can be found at http://www.jonlock.com/ and http://www.nichangell.co.uk/ and is available for pre-order.