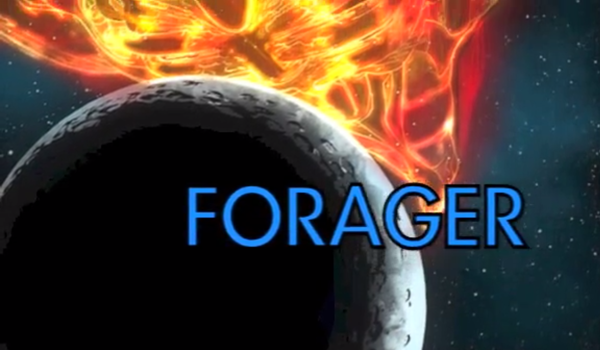 An intergalactic luxury space cruise is just the kind of simple, family vacation every kid dreams of. In Forager, the new graphic novel from Jimmy Palmiotti and Justin Gray, the Travers family go on such a cruise, but things don’t quite go as expected. Featuring amazing artwork and an out-of-this-world story, FORAGER looks to be a great book for the whole family. We had a chance to speak to the two writers about the book and their ongoing Kickstarter campaign.

What is Forager? Can you tell us a bit of the story?

Justin Gray: Forager is about family, both the Travers family who are at the center of the story and the human family as we look toward the stars with the hope of colonizing space. Glenn and Joan face a lot of the same struggles that modern couples face. They grapple with being over worked, financial stress and raising a child on opposite ends of the spectrum. As a result they take a family vacation to try to reconnect, but what begins as a relaxing cruise onboard a space ship becomes increasingly stressful when their six-year-old daughter Ellie begins hearing voices.

Jimmy Palmiotti: The story is all about hope and being optimistic about the future.

What was the inspiration for the comic? And how did you both come to the project?

JG: A lot of it was born out of frustration with the first contact genre in science fiction movies. We’re inundated with an overwhelming number of stories where the aliens we encounter want to eat, possess, displace or wipe us out. I get it, colonialism and because we’re a hostile and violent species the natural assumption is that so is every other one.

JP: We also wanted to get a little more sci-fi under our belt. Its very important for us to have work out there in every genre, and also making this all ages opens up the audience.

You say on the Kickstarter page that these “angels” that Ellie is hearing are more benign than the aliens we’ve been seeing in sci-fi lately. Can you tell us a bit more about that decision and your thoughts on the “evil aliens” we seem to be inundated with?

JG: This is an unconventional first contact story and we break a few of the rules of the genre to what we hope is a refreshing experience for readers. I can’t say it is like Close Encounters or Starman because, while those stories are inspirational they are very different from Forager. Ever since I was a child I’ve been fascinated with the potential impact alien contact would have on the world in a positive way. Would we still fight for the same belief systems, would we still kill each other over plots of land if we realized not only are we not alone, but also a unique species? Would we realize we’re not as important or unique as we once believed?

Can you tell us more about this luxury Star Liner? What would a typical passenger be like? Does the ship have any secrets of its own?

JG: This is literally a case of commercial space flight being as commonplace as an ocean cruise. The technology is in place as a part of daily life in much the same way we are all walking around with computers in our pockets.

I have to say, the artwork on the Kickstarter page is fantastic. How did you decide on the style for the book?

JG: From the beginning we wanted a very specific look and feel for this story. Going back to the tropes of modern sci-fi films and video games the space ships are often dark, industrial, much like a submarine aesthetic. We wanted space to be clean, luxurious and welcoming. Steven [Cummings, the artist of FORAGER]  and I worked together years ago on Legends of the Dark Knight and have stayed in touch looking for the right project to collaborate on again. Steven lives in Japan and has a very different visual interpretation of science fiction and that helped a lot in designing the look and feel of Forager.

JP: The secret to good comics is the right artist to the right script and Steven was our first choice. Having Challenging Studios working on color, we think this combination really makes the book look unique.

Why did you decide to do a Kickstarter for this project? How is it going so far?

JG: So far it is going well and we have such great support for these Kickstarter projects from loyal readers and I feel like with each now project we’re expanding our audience. By working through Kickstarter we’re able to target an audience that genuinely wants this material and then cater the printing and distribution directly to them. This is crafting stories and creating books in a way that makes it a unique social experience. The readers are backers and a part of the process. When you get one of our Kickstarters you know that we packed and shipped it to you by hand. There’s a personal feel to these projects.

JP: We did well on some of our past projects and decided to invest in some new books with the profit. All of our Kickstarters are now paying for the next books… it’s a lovely chain that we hope continues. We are going out of our way with each and every pledge level on this one. Our hope is a lot of people just give it a try in the digital stage if they feel the price is outside their limit. We are trying to connect with our audience on many levels and create a relationship that we hope continues.

Is Forager meant to be a standalone story or could we see more stories from this world in the future?

JG: The universe of Forager can certainly support more stories. For now it is a stand alone OGN, but that’s not to say we might not revisit it in the future.

Do you have any other upcoming projects?

JG: We have a number of projects in the works that, like Forager, will each have a very unique look and feel. We’re working with Hugh Howey and JetCity Comics on the graphic novel version of his best selling Wool Omnibus. We’re developing the second volume of Sex and Violence.

JP: The best bet for everyone is to drop by our site at PAPERFILMS.COM to see what the latest news is. We also offer all of our titles on the site as well as offering the digital versions of past Kickstarters and exclusive books to the site. We are trying harder each day to make it easier for the consumer to find us.

If you want to more information on Forager (and want to support the Kickstarter!) follow the link here.