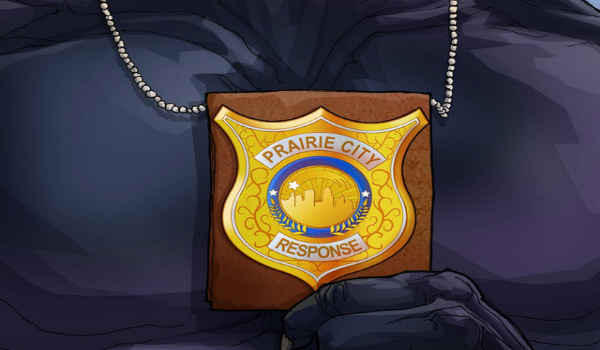 A bunch of misfit heroes are assigned to protect Prairie City from aliens, terrorists and whatever else may pose a threat – a sort of multi-purpose Justice League/Torchwood/Men in Black – in Marshall Edwards’ new independent series.

While their powers may not be overly original (telekinesis, highly trained super-soldier, etc), what is original is how they treat the fact that they have powers. An alien overcomes his hatred for the humans to fight alongside them, causing him to be considered a traitor amongst his kind, a masked woman who refuses to reveal her mysterious past, and a psychic who complains about his salary: the capacity for ass-kicking is exceeded only by their ability to piss each other off.

While Erick Adrian Marquez’s artwork is generally fine, one area of criticism are his faces, which generally look bland and indistinguishable, and do little to let you glimpse the characters’ feelings or emotions. And getting to know the characters will certainly be important when we have such a large cast to get to know; so large, in fact, that many of the background details on the world, such as how it can to be populated by aliens in addition to humans, or how people developed superpowers, are sidelined or only briefly touched upon.

Anyway, the plot goes something like this: a team of super-powered individuals is established to serve as a “stable, ethical solution to super crime” after private security teams killed innocent civilians, mistakenly believing them to be the enemy. The downside to this team, however, is that they can’t put aside their differences with one another and work together effectively (although in later issues they will no doubt manage to do so in deference to a greater threat).

One interesting theme touched upon in the issue is the question of why people would choose to be superheroes in the first place. Do they do it so that they can save people’s lives, thus allowing them to feel as though they are morally and ethically flawless, or do they do it for the fame and glory that it will bring them? As Andre, a man with a super powered voice, is told, he cannot be a hero, but he can be a star. So if superheroes really did appear in the world, after the instant excitement and hysteria died down, what would the long-time consequences be?

The fact that PCR #1 acknowledges this, at least, puts it a step above many other similar titles on the market, and, despite its shortcomings, we may have the start of a great series on our hands.