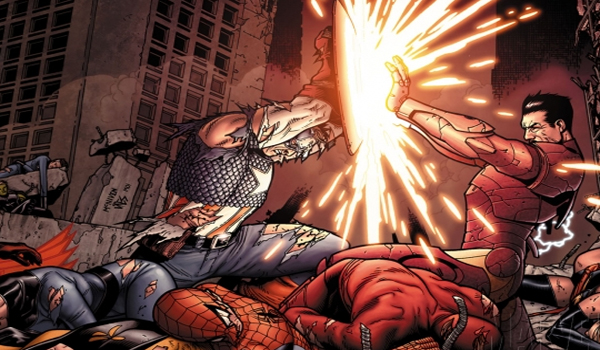 Every superhero has an identity to protect. Whether their masked identity endangers their loved ones or they would find it impossible to live the life of a civilian, every hero has their secret. Civil War starts when a rogue group of rookie superheroes trying to get a bigger audience for there reality TV program decide to take on some of America’s most wanted, which leads to some devastating effects causing the deaths of some 900 civilians. With a full public back lash against superheroes in full swing the American government decides to bring in the “Super Registration Act”. And then all hell breaks loose.

Written by Mark Milliar and Steve McNiven ‘Civil War‘ shows the epic struggle between superheroes faced with this decision. Excellently backed up by the artwork of Steve McNiven, Dexter Vines, and Morry Hollowell.

Civil War shows the impossible choice of whether or not heroes will stand true to the mask or reveal their identities, receive proper training and become legitimate publicly accountable agents of S.H.I.E.L.D. Faced with this dilemma, the superhero community split into two factions. The first, led by Iron Man, chose to uphold the registration act and included the likes of Reed Richards, Wasp, Sentry and most notably Spider-Man. Spider-Man chose to unmask himself in front of a live press conference to show his support to the act and highlight its importance.

Others, however, see the mask as vital to their work and refuse to give in and sign the act. These heroes now become hunted by the government and are led by Captain America, fresh from his escape from S.H.I.E.L.D headquarters. Cap is joined by the likes of Luke Cage, Sue Storm, The Falcon and more. Although the bad news is for unexplained reasons favorites such as The Hulk and Hawkeye don’t appear in Civil War, however that doesn’t stop the action and with both sides heavily armed, lines will be crossed, loyalties tested and friendships and families will clash with so much uncertainty only one thing can be sure the modern era of superheroes will never be the same again.

The story builds up to a epic ending only to be cut too abruptly, the spotlight focused on the battle between Captain America and Iron Man without taking into consideration many of the other big time players of the Marvel Universal such as Wolverine or Thor, a personal opinion of course which might not relate to everyone. The author obviously tried to cram in as many superheroes as possible and sometimes this results in many pointless scenes and with the graphic novel being quite a compact one, this takes up valuable space. The many battles provide a few glimpses into the struggles of the other superheroes but for me, to take this story to another level Millar could simply make the novel a longer read. Of course, the story was expanded in other titles, so perhaps Millar wanted to leave something for the other writers…

Overall an excellent read and must have for any collection, powerful script, great artwork and action packed sums up what a Marvel comic should be and can be read over and over without losing its touch. All in all without being too greedy what more can you ask for?

What did you think of Civil War? Sound off in the comments below or send us your thoughts on Twitter.