Home » REVIEW: Experience the Magic of the Legend! 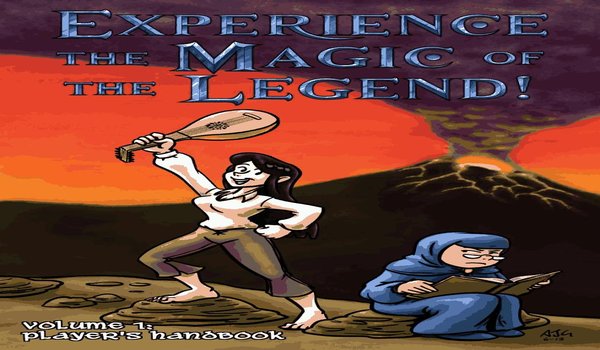 Experience the Magic of the Legend is a fun, charming and downright hilarious comic created by Arthur Goodman, a clearly talented writer and satirist who has a large amount of experience playing fantasy roleplaying games in his time judging from the amount of gags and take thats in this first volume (titled “Player’s Handbook”) of an entertaining series of comics.

While nowadays, our glorious nerdom is a massive jumble of superheroes, sci-fi, giant robots, anime, ponies, viral videos and whatever insanity 4chan spits out next, fantasy roleplaying games like Dungeons & Dragons were probably the first children of nerd and geek culture. The genre has continued, thrived, and grown over the years, particularly in video games with Final Fantasy, Skyrim, and World of Warcraft. Certain aspects of RPGs have been carried over to other subgenres, like moral-based multi-choice decisions that can effect your game experience, parties of various characters/players, and even turn-based gameplay like in Pokémon. And Experience the Magic of the Legend takes every major trope and element of the genre and has a big harmless but loving laugh at its expense.

Since the comic is an anthology, the story is more a series of changing events rather than an ongoing narrative – two RPG gamers, the experienced Noli/Sara and the more jovial Fili/Abby as they venture through the many quests and challenges of a typical fantasy online roleplaying game. Noli is more focused on the gaming experience and knows quite a lot about the inner workings of the game’s universe (she spends two panels explaining the damage probability of two swords that Fili buys), while Fili is more carefree and ignorant (possibly deliberately) of the rules and ways of the gameplay. In the same scene where Noli is explaining the skills of her weapons, all the information confuses Fili to the point she just swaps her character type to a caveman just to process the info easier, and it is hilarious.

Right from the first panel, you can identify with the two characters and how they both represent hardcore and casual gamers of the genre. But then that is turned on its head, when it is implied that Noli has been playing games since their inception and despite being a know-it-all on the subject and enjoying it, she wishes to just level up and get some treasure, though perhaps in a more reserved manner than Fili who is gung ho about just about everything they encounter. The chemistry between the two is very reminiscent of Pinky and the Brain from The Animaniacs, Noli being the strategic planner while Fili throws caution to the wind and likes to do reckless things to see what happens. It is very entertaining seeing what Fili gets up to, and how Noli reacts, though in some gags, the roles are reversed and Noli gets some satisfaction out of Fili’s blunders.

Most of the gags in the comic are satirical looks at common features of RPGs. In the opening scene, Noli and Fili go on a quest to retrieve a money chest from some badguys, Fili kicking the door in and the women making quick work of the goons while discussing the different character classes in-game. Then, the two completely ignore the NPC (non-playable character) who owned the chest and Fili spends the money on a lute. Another has them facing off against a parody of the killer rabbit from Monty Python and the Holy Grail, and after Fili produces some new weapons (a brilliant nod to Looney Tunes’ “What’s Opera, Doc?”), which she uses completely in the wrong manner to beat up the rabbit, with Noli’s exasperated look being the crescendo.

My favourite gags have to be the one where Fili buys an expensive magic boomerang with a fantastic outcome, and when Noli beats a pompous egomaniac with Megashark (yes, that Megashark). The best gag has to be the longest one, previously seen in Arthur Goodman’s other comic Square Eyed Stories, which involves the two protagonists reaching a magical item after an apparently time consuming dungeon crawl only to be halted in their progress by an annoying imp with a puzzling name that would make Superman’s Mr. Mxyzptlk raise an eyebrow. However, when he challenges the women to answer a series of riddles, Noli finally boils over and informs him that they won’t answer his riddles and proceeds into a tirade about how much hell she has been through and instead starts negotiating with the little dungeon master for an alternative way to get the magic item, and I just love the payoff.

The volume also has a sketch gallery (where the two characters appear to be mugging Link from The Legend of Zelda) and characters profiles. A very enjoyable and hilarious comic, Experience the Magic of the Legend is a definite winner and I highly recommend it.

Would you read a fantasy RPG parody comic and are you a fan of the genre? Check out Experience the Magic of the Legend here!