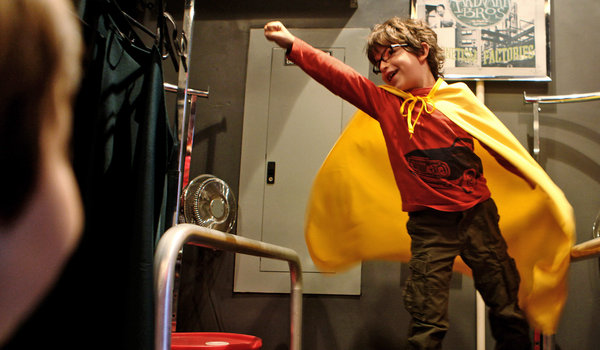 Okay, there have been more than a few weird comic characters that have made an appearance on the silver screen over the years. Howard the Duck… actually I could stop right there if I wanted to. How the hell was that greenlit? But still, there are plenty of other characters that nobody in their right mind would put on film, right? Right? *Laughs Nervously* Right? Seriously, not a rhetorical question, guys. I’d like actual confirmation, simply for my own piece of mind.

So, maybe if we put a few of these characters on a list then Hollywood will probably get the message and leave them well enough alone. Let’s hope so. We really can’t put anything past those lunatics. Here’s the top 10 characters we will probably never see on film.

DISCLAIMER! Seriously? You need me to spell this out for you again? Alright fine. This list is my own personal opinion and done in no particular order. You may have other ideas about who should be on this list but frankly I think I’ve got them all. Really. I mean, these guys… these are some doozies!

No, not THAT one. There have been far too many anthropomorphic animals in films already. Although we’ve never seen them in space ships… at least until Guardians of the Galaxy comes out. No, this is the member of the Eternals of Titan, also known as Eros. Want to know what his power is? Sex. Sort of. Basically, he can manipulate the emotions of others by mentally controlling the pleasure centres of a persons brain, essentially making them fall in love with anyone or anything he wants. Guess how he likes to use this power?

So, yeah. As powers go, his is probably the creepiest. Didn’t stop him from being an Avenger though. During which time he… slept with She-Hulk. Huh. He was even put on trial at one point for sexual assault. And his lawyer was Jennifer Walters, a.k.a.: She-Hulk. No prize to the first person who deduces what they did at one point. If you guessed sex, you guessed wrong! She beat him up after she thought he was tampering with the emotions of the witnesses. Ha. That’ll show him.

With a character so… off putting, there is no chance that we will ever see him on- HIS BROTHER IS THANOS! AHHHHHH! 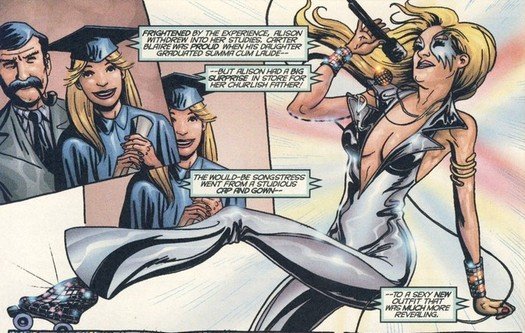 Poor Dazzler. I think that sometimes she gets a bit of a bum rap. I mean, sure she was only created because of the disco craze. Sure, she was the product of a promotional tie in with a now defunct record company. Sure she was designed entirely by a committee with little to no creative idea other than “disco super hero”. But I still think that… wait, where was I gong with this?

Actually, this character has nearly made it to the big screen several times. She was rumoured to make a cameo appearance in X-Men: The Last Stand, she was announced as one of many character being considered for development in 2009, her name appears on the list Mystique finds in X2: X-Men United and at one point there was nearly a Dazzler film in the works in the 80’s. I’m not kidding! They had a script writer ready and everything. Bo Derek was going to be Dazzler, can you imagine? Thankfully, the project fell through. That was a close one!

Now, I’ve read a few Dazzler comics (a fact I refuse to have any shame about), and the character herself really isn’t all that bad. But her concept and creation are just too… too disco for want of a better word.

From a deal with a record company to a deal with a toy company (sort of), Rom Spaceknight was originally a very, very cheap action figure made by Parker Brothers, who are best known for board games such as “Monopoly”, “Cluedo” and the number one cause of domestic fights everywhere, “Sorry!”. In order to get more people interested in the toy, Parker Brothers licenced the character to Marvel who subsequently created a comic book based on it. Ironically, the comic outlasted the toy, with 75 issues being printed between 1979 and 1986.

One of the most confusing things about Rom is this. Most people think he’s a robot. Turns out, he’s not. I know, I was confused too. He’s actually a cyborg. Yep. There’s a guy under all that armour. What does he do? Well, he used to be a Spaceknight, a group of cyborg warriors dedicated to stopping these magic aliens called Dire Wraiths. I say used to. Thing is, Marvel no longer possess the licencing rights to Rom. So the character cannot appear in any of their comics in his armour.

So chances are, we won’t be seeing him in any of Marvel’s films any time s… wait a minute! Parker Brothers is a subsidiary of Hasbro! And Hasbro made all the Transformers films, the G.I. Joe films and Battleship! We’re in trouble people! There’s no telling what they’ll do!