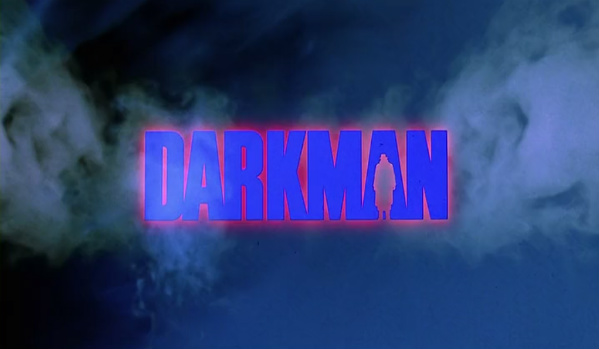 The unfortunate reality is that we live in a world where a newly-released film can be marketed as a cult classic. This is a strange statement- how well organised can this cult reasonably be, considering their apparently lightning-quick formation? Okay, I’m being facetious- the real problem is that there are already many films which just cry out for a cult following. Of these forgotten cult classics, I think Darkman is the one most truly deserving of that ardent love which only comic fans can provide. In this film, scientist Peyton Westlake (Liam Neeson) works on a new synthetic skin, which dissolves after just 99 minutes in daylight. Unbeknownst to either, his girlfriend Julie (Frances McDormand) has gotten in trouble with some gangsters, headed by the evil Durant. When Durant and his men torture Westlake and leave him for dead in his laboratory, he manages to survive via some experimental surgery which augments his strength, limits his pain receptors, and twists his emotions. He begins to enact his vengeance, using his synthetic skin and super strength to fight back. So far, so good: looks like a typical superhero flick, I hear you cry. Why is Darkman so deserving of cult status?

First off, it’s not an adaptation. Most superhero films are adaptations, and so tend to at least be affected by what I call ‘adaptational baggage’. This is best explained by the questions it prompts: ‘Why isn’t this character in the film?’, ‘Why was this scene cut?, ‘Why didn’t they use this storyline?’, and so on. A key example of that is the negative reaction to Iron Man 3: some fans were angry about its lack of fidelity as an adaptation, but for others (myself included) the best parts of the film, as a film, were precisely those moments which deviated from the comic property. Because of this, many superhero films have to go out of their way to include things which, while fine in the comics, do not adapt well to film. Pushed too far, you can end up with an adaptation which is totally accurate to the original material, but completely terrible, because the original material was not a film, while the adaptation is. Watchmen is a good, or rather bad, example of this. As Darkman is an original property, written first for film, it’s an opportunity to see a non-adapted superhero tale, a story and character designed specifically for the screen, which as a result doesn’t have any adaptational baggage to deal with. This makes it exciting for a fan of superheroes, as it’s an opportunity to see a usually-comic-specific character type created entirely for another medium.

The second major reason this film is a great cult classic is because it bridges the gaps between cult and mainstream films. Sam Raimi has been a great talent since his first film, The Evil Dead, but it’s arguable that most people will know him from the first trilogy of Spider-Man films. Moving from The Evil Dead to Spider-Man might seem like a bizarre career move, but Darkman bridges that gap, as we can see Raimi move from the splatter of his early work to the more mainstream latter work. It’s not quiet like The Gift, but it has some of its increased character focus; it’s not as violent as The Evil Dead, but it certainly has a very dark sense of humour, and it has the self-awareness that Spider-Man and Drag Me To Hell would later show. In doing this, it also illuminates both The Evil Dead and Spider-Man; viewed after Darkman, the Evil Dead trilogy’s slide into comedy makes more sense, while Spider-Man‘s frenetic camera-work and montage sequences clearly follow. For this reason, it’s particularly enjoyable for a film buff.

A necessary criteria for any proper cult film is that it has to be fun and weird, and Darkman is nothing but. It’s infectiously fun, blending dark humour, real pathos, and well-placed callbacks and pay-offs in a way which doesn’t exclude the audience but draws them in. The film pulses constantly with ludicrously overplayed, melodramatic moments; in one such moment, Westlake savagely beats a man at a carnival, steals a pink plush elephant from him, and thrusts it at the screaming Julie. The film also offers a world populated with richly-characterised ‘goodies’ and ‘baddies’, not least portly yet deadly Durant, with his unforgettable cigar-cutter introduction and habit of collecting the fingers of men he kills. It’s got an incredible sense of visual style, aided by Raimi showing his typical panache with creative camera movement. In particular, a number of frenetic montages feature in the film, showing Westlake’s state of mind during his rages; these montages offer some startling imagery, not least Liam Neeson’s head on a child’s clown marionette in a puppet theatre. As far as the casting is concerned, Neeson appears gifted with the ability to know when something should or should not be played straight, and works it perfectly; where else can you see Qui-Gon Jin propose sex by whispering ‘Let’s dance’? Frances McDormand also excels, as she seems to in almost any role. It even has an uncredited, one-scene role by Jenny Agutter, what’s not to like?

Hopefully I’ve changed your mind on Darkman– unless you already loved it, in which case keep on keeping on- and I hope I’ve inspired you to seek out and watch this forgotten cult classic. Do you think Darkman is deserving of more praise? Or do you think Sam Raimi’s never made a good superhero movie? Share your thoughts in the comments below, or send us a tweet, to let us know!