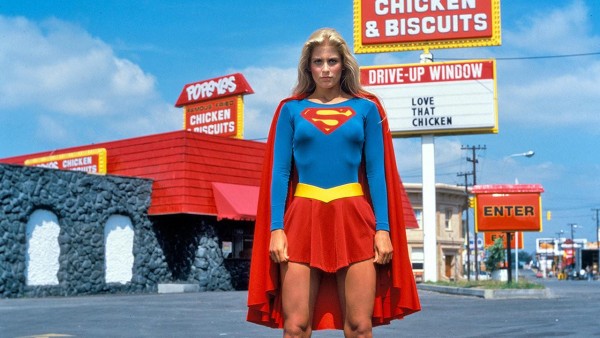 Smurfette, Batgirl, Siryn, She-Hulk, Minnie Mouse, Namorita, The Bride of Frankenstein, any one of the Spider-Women and Harley Quinn. All of these female characters were made as counterparts to already established male characters. But perhaps, most infamous of all, is Supergirl. Or rather, Supergirl, star of the 1984 film. I say infamous, a more apt word would probably be stupid. Let’s have a look and see if this film has stood the test of time, shall we?

So we start with some, in all fairness, pretty impressive looking opening credits that, in true Superman style, go on for FAR too long. Two and a half minutes of just one name flashing on the screen one by one. It wears a bit thin, is all I’m saying. So the film opens on a strange looking rock thingy. Oooookay. But it turns out there’s a city in the rock thingy! Oooookay. Hey, movie? This might be a good time for some sort of expositional voice-over narration or scrolling text. Y’know, just to let us know where we stand? But, no. Instead we get the late great Peter O’Toole holding… the love child of Harry Potter’s wand and a sonic screwdriver?.. Huh.

He plays Zaltar, who talks with a girl named Kara, played by Helen Slater. They talk a bit about Earth, where Kara says her cousin (obviously Superman, but they don’t exactly go out of their way to tell us that) went. Erm, okay. Two things. First of all, how do you know your cousin went there? Secondly… where are you? Who are you? How do you know about Earth? You need to introduce yourselves better! Well, I say that. They do manage to tell us where they are. What a shame they do this in one of the clumsiest info-dumps I have ever had the misfortune to be buried under! And you know the worst part? I was still confused afterwards! He says that they are in Innerspace, but what the hell is that? Hello! Audience member completely lost here! Hello?

Zaltar also has a weird spinny ball thing called the Omegahedron, that can supposedly do… I don’t know, magic? Again, things aren’t really explained much. But do you know what he does with the… okay, I’m just going to call them the ball of unspeakable power and the sonic wand. But what does he do with them? Give them to Kara, who in the few minutes we have known her appears to be a ditzy and almost childlike idiot. I’m sure that nothing will go wrong! And nothing does. Well, except for her losing the ball, nearly killing herself and others and in the process dooming her entire city, all just a few seconds after being given the ball. But apart from that, everything’s hunky dory! So, it turns out that the ball thing powers the city and without it everyone will die. So what happens next? Kara goes into some kind of pod… thing, which is supposed to transport people out of Innerspace to Outer Space, with the intention of getting the ball back. Of course, she does this without anybody knowing, presumably because they’d try to stop her. I hate to break it to you, Kara but THERE’S A GOOD REASON FOR THAT! Nothing you’ve done has shown us that you are in any way competent or even in complete possession of spolid mental faculties! Let Zaltar go. Giving you the ball of unspeakable power notwithstanding, he is far better suited for this!

Worse of all, because he is indirectly responsible for all this, Zaltar exiles himself to the Phantom Zone. I could go on and on about how stupid and self pitying this is but I will simply sum up my feeling with one question: “WWWHHHHHYYYYYY?!?!?!?!?!?!?!?!?” Meanwhile, on Earth, a woman named Selena (played by Faye Dunaway) is having a picnic with Peter Cook. I could tell you a little bit about Selena as a character but to save time I will just quote one of her first lines: “Such a pretty world. I can’t wait until it’s all mine.” That should give you a clear indication about what she’s like. Oh, and she’s a witch apparently. Yeah… make of that what you will. And if that wasn’t enough, the ball of unspeakable power lands right next to her. Isn’t that a coinkidink? Of course, she immediately recognizes it as a ball of unspeakable power and decides to use it to take over the world. Insert evil laughter here.

At this point, Kara arrives on Earth, inexplicably wearing a Supergirl outfit. Oh, you may be wondering where Superman is all this time. Well, according to a brief radio news flash, he’s on a peace mission to a galaxy many light years away. Can you say convenient, children? Kara immediately tries to track down the ball of unspeakable power, knowing full well that the fate of her people hangs in the JUST KIDDING! She instead goes around getting used to her new powers, such as crushing a rock, using her heat vision to open a flower (somehow) and flying around in the most dazed and moronic way possible. It is truly amazing how little sensible characterization she has. I mean, I’m not saying I wouldn’t experiment and enjoy my powers if I had them… ASSUMING MY PEOPLE WEREN’T IN DANGER! Time is of the essence Kara. Chop, chop! I will say this; the flying effects are pretty good for the time. But that doesn’t change the fact that she’s all but forgotten why she’s here in the first place.

From here, things only get worse. Kara bizarrely decides to enroll in an all girls school, meets the younger sister of Lois Lane and falls in love with the school groundskeeper. Not to sound like a broken record but… ball of unspeakable power? City in danger? Any of this ringing a bell? Clearly, Kara has the old comic book trope of amnesia. And she’s not the only one. Selena forgets the whole world domination thing after she sees the groundskeeper and falls in love with him as well. That’s right people. The conflict between heroine and villain of this film has been boiled down to them fighting over a man. If the writer of this film was here right now, I’d slap him in the face with Freddy Krueger’s glove.

So, after what feel like an eternity of wasted celluloid, Selena eventually sends Kara to the Phantom Zone. There she meets Zaltar who is drunk off his arse and still being all “Boo hoo hoo, I inadvertently doomed my people but rather than do anything about it I’m going to wallow in self pity, boo hoo!”. They talk about things from Earth some more, which Kara is still pretty much oblivious about despite having lived there a few weeks. Kara tries to get Zaltar to man up and find a way out of their imprisonment. And it turns out there is a way to escape. Hang on! I thought the Phantom Zone was supposed to be impossible to get out of? Mind you, if Zod could get out in Superman II then there’s no reason why they can’t. So, Kara has a big speech about defeating Selena and saving their people. Oh, now you’re concerned about them? In the end she manages to convince him to help her and they go to a small ridge on a cliff overlooking what can only be described as a tornado of doom. And, of course, Zaltar dies. Shame. Well, no use moping.

Kara escapes the Phantom Zone and faces off against Selena, who attacks her by magically making the floor rather UNSTEADY! Oh no! Oh, if only Supergirl could fly or something! But that’s just crazy talk. Things do get a bit more exciting when Selena summons some kind on demon monster to kill Kara, which nearly succeeds. But then, at her moment of self doubt, Kara hears Zaltars voice Obi-Wan Kenobi style. Here’s how that conversation goes: Kara: “I can’t. I can’t” Disembodied voice of Zaltar: “You can. On, girl.”. Inspiring stuff. Still, she defeats the monster and Selena by… flying round them a lot. Meh. It’s no stupider than turning back time by flying round the world. So, Kara gets the ball of unspeakable power back, flies to her city, which is now underwater for some reason and they all lived happily ever after… except for me, as I am now utterly miserable for having watched this unfocused, confusing, weird weird weirdweirdweirdweirdweirdweird WEIRD film!

So, in summary, the characters are one dimensional, the story has no direction, the dialogue is cheesy beyond belief, the acting is atrocious and it commits the worse sin possible… it made me dislike Peter O’Toole! Shame on you movie! Shame on you! In short, avoid this film like Superman avoids kryptonite.

But what do YOU think of this film? Is it so bad it’s good or just… bad. Why not let us know in the comments or on Twitter? Just make sure you remember why you’re doing it. There appears to be a case of amnesia going round. Speaking of which, where am I?