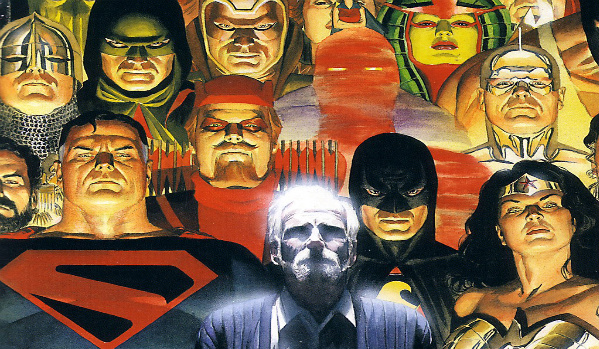 Elseworlds comics explore alternate takes on famous DC characters and teams, in what is essentially a prestige format version of Marvel’s What If? and the Imaginary Stories which recurred in Silver Age DC books. There are a few crucial differences; What If? was an anthology, so each comic had a few alternate tales within it, and Imaginary Stories would come up in otherwise normal on-running books. There are also some similarities: as with What If? and Imaginary Stories, some Elseworlds books are incredibly stupid (“What if Batman was a pirate?”, also known as Leatherwing, springs to mind). However, the best show that the iconic nature of DC’s characters allows them to be interpreted in settings often wildly different to those which we usually see them in.

With that in mind, here’s my top 6 Elseworlds (in no particular order). 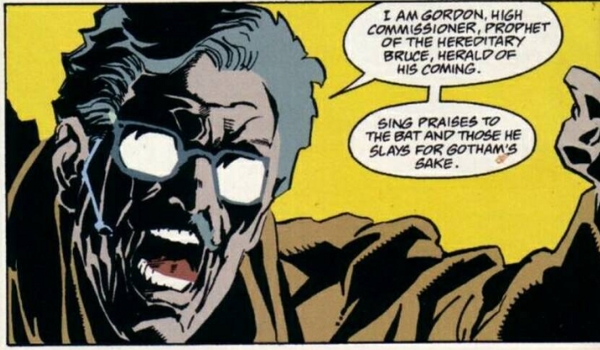 In a distant future Gotham, power-mad leader the Bruce rules with an iron fist, and runs a game every year where incarnations of famous villains are hunted and sacrificed by citizens dressed as Batman. This might well deserve a place on this list for the sheer strangeness of the concept, but the execution of such a bizarre story is actually surprisingly good. It’s helped by the identity of the narrator: the Joker. Or, a Joker. And identity is a major theme of this work; it’s clear from the off that this Joker is not like the Joker we know, and why this is the case is unclear, even to him. A slowly unfolding mystery sitting at the heart of what is essentially a Running Man pastiche is surprising, but very effective.

5. Batman: The Golden Streets of Gotham 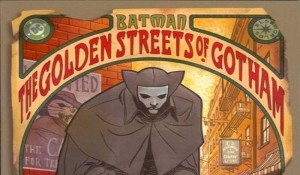 AKA: On The (Gotham) Waterfront

This particular comic deviates significantly from the traditional Batman set-up; an Eastern European transient worker- Bruno Vaneko- returns to turn-of-the-century Gotham after the death of his parents in a factory fire. On seeing the appalling conditions of the factories, Vaneko resolves to bring about social change and fight the industrialists to raise standards. This, of course, must be done in costume, and Vaneko wears a bat-mask after the example of Selina Kyle, who here is an industrialist’s daughter secretly leading a union. This comic uses its historical background to great advantage: instead of just showing how cool Batman would look in a Victorian costume, it justifies the masks worn by Kyle and Vaneko as necessary because of the draconian anti-union laws. Switching the socio-economic situations of Catwoman and Batman also allows for an interesting change in power relations between the two. But most importantly, this comic shows the strength of Elseworlds as a concept: despite not sharing a background or an era with our Batman, we can recognise that no matter where he is, Bruce Wayne fights for justice. A quiet skill with characterisation, and an excellently researched setting, lifts this above the multitude of historical Batman Elseworlds.

AKA: Superhero Babies Are a Bad Idea

Undoubtedly the most famous of the Elseworlds books, and fully deserving of its fame, Kingdom Come looks at a dark future of the DC timeline. Superman hasn’t been seen for years; Batman’s created an army of Bat-robots to patrol Gotham. The Flash exists only as a blur, patrolling every part of Keystone City simultaneously. But most importantly, the children of metahumans have been fighting, blurring the lines between heroes and villains, until metahuman violence causes a disaster which decimates part of Kansas. Public opinion demands something must be done; so Superman returns. The story of the comic is a welcome examination of the darker and edgier trend that dominated the industry in the 1990s, using the set-up of morally nihilistic metahumans versus the Golden Age old guard to make the debate more real, and prefiguring Geoff Johns’ work on similar themes in Infinite Crisis. The most important element though must be Alex Ross‘ superb art; each panel is a separate painting, and Ross’ attention to detail- in designing huge numbers of costumes, to hiding in-jokes in splash panels, to accurately portraying the play of light and shadow on a human face- matches Mark Waid‘s fire and brimstone tone perfectly. An absolute must-read.