Like all major Marvel characters, Captain America has appeared in a vast variety of animation. Unlike many other well known superheroes, Captain America is often seen as being an icon of everything that the American Dream should stand for: hope, freedom of speech, prosperity etc, so it’s no surprise that most of his animated appearances see him fighting for a better world. And fighting his arch nemesis, the Red Skull, the Joker to his Batman.

Because of the ideology that he represents, Captain America’s animated appearances were usually a bit more serious than those of other heroes, here we have a character who wakes up after being frozen to find himself trapped in a time that he does not belong to in a world that does not seem to be fixing itself anytime soon.

With the release of The Winter Solider imminent, let’s take a look at five of the best animated appearances of everyone’s favourite patriot. 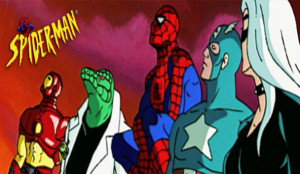 As we learn from the 1994 Spider-Man cartoon series, Captain America was not frozen in ice after World War Two, he was trapped inside a dimensional machine along with his arch nemesis the Red Skull. Who would have thought? But despite changing the character’s backstory, we are treated to a very entering team up in which Spider-Man and Cap go head to head with the Red Skull.

Here Cap was voiced by none other than Watchmen and X-Men scribe and Solid Snake himself, David Hayter. Wonder how the Captain America movie would have been like had he scripted it… 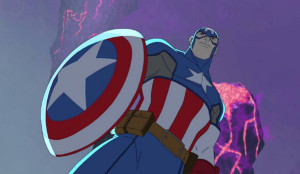 Okay so it may just be an attempt to cash in on the success of the live action Avengers film, but the series actually features quite a creative story in which the Red Skull tries to place his mind into Captain America’s body, Superior Spider-Man style.

And who would have thought that Captain America fought alongside Dracula in World War Two? 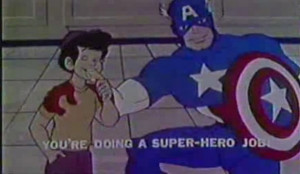 Captain America can’t save the world or mankind anymore because he’s got far more important things to do. Like turning of lightbulbs to save electricity or shutting refrigerator doors to stop cold air from flowing, as this 1980s TV commercial informed us. ‘Nuff said.