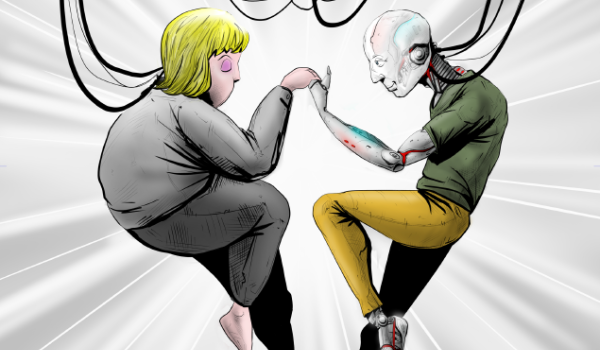 A popular topic in science fiction at the moment is the breakdown of the barrier between man and technology. It’s not difficult to understand why, as, figuratively and literally, we all grow progressively closer to our smartphones. From Intelligence to Almost Human, it’s perhaps the single most popular concept on TV at this time. As such, it becomes progressively more challenging to do anything original with the formula. Writer Sam Roads and comic book artist Stuart Catley, however, seem to be making an attempt to do just that.

Shifting events from the dystopian metropolises that so often signify the genre, Silicon Heart takes place in the Welsh Valley town of Pontypridd circa 2043. It documents – or seems likely to document – a love story between an unremarkable teenage girl and an I, Robot-style synthetic. The front cover shows them reached out to one another as if in utero. On Valentine’s Day we jokingly published an article on our Top 10 Human/Robot Romances, but the premise is one rich in dramatic potential. After all, we’re all lonely, right?

Opening with a set of bright, minimalist ‘adverts’ which come from in-universe causes, Silicon Heart establishes itself first and foremost as a book with a light touch. Doing this also packages exposition in a reader-friendly way- two pages in, we know that this is a world with lifelike robots (or ‘Sy-Bs’ as they’re known), and that there are at least some who would prefer them not to exist. This is a trick which Paul Verhoeven used to great effect in Robocop and Starship Troopers, and which has been underutilised by comics (with the exception of those two titans, Watchmen and The Dark Knight Returns). The attention to detail here is key- one of the adverts even includes terms and conditions, which are well thought out (and very funny). The use of these in-universe adverts is a refreshing approach to the often difficult art of constructing a teaser, where one needs to give away just the right amount of information.


Having only so far read 13 pages, it’s impossible to determine exactly how the setup may develop, but certain elements – such as contrast between “Adopt a Sy-B” advert and a political campaign against synthetic parents – suggest there is plenty of tension to be developed upon. By creating a classic love story set-up, but with a robot on one side and a non-traditional protagonist on the other side, Silicon Heart is clearly aiming at some more difficult themes. From the other adverts interspersed with the comic (they’re at the same interval as they would be in a mainstream comic too, how clever!) it seems that anti-robot sentiment is common, and that they’re often treated more like commodities than lives. With this in view, it seems a relationship between a human and a robot would bring up themes similar to those raised by X-Men– racism, homophobia. But this is speculation. As far as the teaser is concerned, apart from a few nice touches, like a multicolored blimp floating in the air over the dilapidated Pontypridd Comprehensive School, there’s not much yet to comment on: Catley’s artwork is effective, if a touch crude, and Roads’ writing characterful yet simple.

The teaser for Silicon Heart gives us a brief glimpse at an intriguing, strangely familiar world. It remains to be seen, though, if they can capitalize on all that’s come before then.