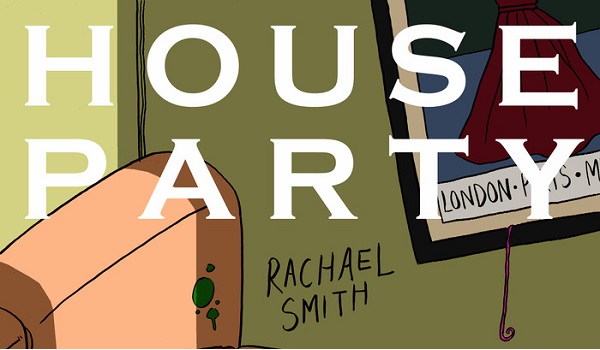 House Party is a brilliant new graphic novel from Rachael Smith – perhaps best known for Flimsy the Kitten. She writes funny, relatable comics about a very wide range of things. We at A Place To Hang Your Cape recently had a chance to chat with her…

A Place To Hang Your Cape: Can you give us a quick summary of what House Party is all about?

Rachael Smith: House Party will be a 92 page graphic novel where three lost 20-somethings are feeling disillusioned after being shoved into the real world since feeling like superstars at university. In an attempt to get their happiness back they throw a massive house party, just like they used to. Instead of reconnecting them with their younger selves, however, things go a little differently and the three of them must decide how to move forward in lives that none of them really asked for.

AP2HYC: What’s been the best part of working on this project so far?

Rachael: Ooooh well, I’m very proud and humbled by how excited people seem to be about it! I raised the funds to get it printed on Kickstarter (here) and it was funded in 4 days. It’s still going strong now – at the time of writing we’re on £2992 – so it looks like we’re gonna make the second stretchgoal which is amazing! It’s also been brilliant to have Great Beast behind the project. Making comics is sometimes a bit of a lonely endeavour – so it’s been lovely to have Adam (Cadwell)  and Marc (Ellerby) on hand to answer my (many, many, many) questions about comic publishing.

AP2HYC: As a twenty-something myself, the characters of ‘House Party’ seem very relatable. How much (if any) of the project is based on your own life and experiences?

Rachael: Quite a bit! I started writing House Party when I was still at my full time admin job and was feeling pretty despondent and unappreciated, so a story about a group of ex-students feeling like they had nothing to put their creative energy into anymore was probably inevitable. I did Fine Art at uni and then worked at a coffee place for a while – like Siobhan, so there’s quite a bit of me in her.

AP2HYC: How did you get into creating comics/graphic novels?

Rachael: I’ve been an illustrator since 2008 and began playing around with silly little one-page comics (ummmm there’s one here). Leigh Walton from Top Shelf Productions noticed my stuff and asked if I’d be interested in doing an 8-page story for their website. So I made a story called ‘Ruby and Moon’ which was about magic fish. I decided to print it, along with another short story called ‘Flew’ and so that was my first foray into comics creating/publishing. 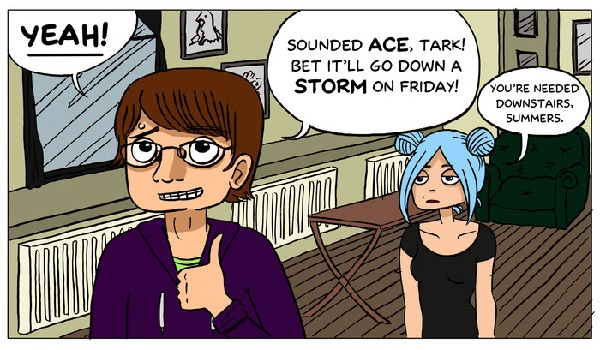 AP2HYC:  And who are your personal comic heroes (either creators or characters!)?

Rachael: Kate Beaton will always be up there for me. She was the first comic book artist that I found whose work actually made me want to give comics a go myself. Her stuff was just so hilarious and different from anything I’d seen before.

AP2HYC: I really liked ‘Flimsy the Kitten’ – do you plan on doing more with Flimsy? And do you have any plans for launch events or appearances for ‘House Party’ like you had for ‘Flimsy’?

Rachael: Aww good ole’ Flimsy. I do want to do more with her but for the time being it’s just ‘Flimsy’s Guide to Modern Living’ – which is on its second print run, and her Q&A website: http://askflimsy.tumblr.com/. There WILL be a launch party for House Party (of course!), I don’t know the details of it yet but I do know it will be at Orbital Comics in London on the 13th June – then the day after is ELCAF which will be the first con that I’ll be taking House Party to. Hopefully I won’t be too hungover…

AP2HYC: Can you tell us what’s going to be next for you?

Rachael: I’m working with a couple of writers on two comic projects, one with Will Brooker called ‘Towards the Moon’ – which is a beautiful coming-of-age story about a girl moving away to university, and the other with Andrew Waterfield called ‘ÚBERBLAZE’ which is going to be HILARIOUS.

AP2HYC:  Last of all, what’s one reason we should all just go and buy ‘House Party’?

Rachael: There’s a bit with a set square which is making everyone who’s read it do a genuine ‘lol’. What are you waiting for??? 😀 Clicky clicky!

We couldn’t put it better ourselves. To support Rachael click the link to her Kickstater here. Alternatively you can check out her blog here.