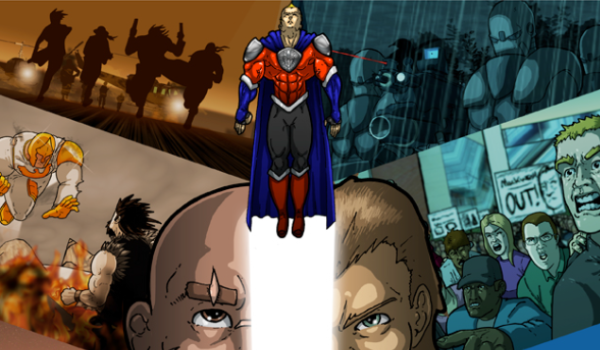 How many first-tier British superheroes can you name? Superheroes that are not just British in origin but are themselves British? With the exception of Captain Britain and John Constantine, Blade – believe it or not – and V from V for Vendetta, you’d be hard-pressed to come up with any that might turn up in the top 10. The UK is one of the premiere comic book producing nations on the planet yet even amidst the indies there’s a distinct lack of limey ubermensch (or menschen, for that matter). As such, webcomic Vanguard immediately has a step up on the competition.

Created, written, and illustrated by Dan Butcher, Vanguard focuses on an eponymous team of British superheroes, led by South London orphan Paul Drake AKA Pendragon. A super soldier with a St. George’s cross on his shield, he has the persona of Steve Rogers but the attitude of Batman. In support are Godiva (think Wonder Woman with mind control powers), Gradion (Beast if Beast were a wisecracking, antagonistic lycanthrope), Woden (Green Arrow personified as a heavy-drinking Glaswegian druid), Ophelia (a paranoid Black Widow-type with telekinesis), and Kingsword (a lovely self-effacing bloke who just happens to be the UK’s equivalent to Superman). Joining them for the first time is new team member Ridley – no codename as yet – who seems more or less set to serve as an audience surrogate.

The Vanguard team are a group of highly-trained individuals who were either born with powers or have been given meta-gene enhancement – Kingsword, for instance, is the only AlphaOne hero the UK has been able to afford to produce. In a world where Russia is on the verge of civil war and superheroes can be artificially created, it seems likely that there would be an arms race to create as many as possible. As intriguing a premise as that may sound, it’s one that Vanguard has chosen to save for somewhere down the line, plumping instead for a tale of espionage and a diplomatic plane downed in Myanmar.

From the off, Butcher’s artwork feels strongly dynamic: it’s as if he’s simply using frames to take snapshots of the action. The characters models are gawky, semi-realistic, and there’s a strangely precise use of lighting that feels vaguely pop art. In this universe, superheroes are a purely nationalistic affair and Vanguard are in service to the British government. Sent into Myanmar as an elite unit to rescue hostages, they initially feel more A-Team than The Avengers, though I don’t remember Hannibal and Co. being quite this kill happy. The characters themselves are strongly archetypal: Pendragon is weary and pragmatic while Ridley – a bit absence for a supposed audience surrogate – feels appropriately out of his depth. There’s a will-they-won’t-they relationshp between Godiva and Kingsword, which feels slightly more low-key than their American counterparts, in a suitably British way.

From an introductory scene in Trafalgar Square to phone calls with family based in Croydon, the events of Vanguard Book 1 may be set abroad, but the series is at pains to remind you that its heart lies in Britain. There’s none of this jet-setting Fortress of Solitude stuff; just a sensible military base concealed beneath the Thames Barrier. There’s even the money shot: the Vanguard’s “X-Jet” breaking the surface of the Thames and soaring over Big Ben. There’s even an accompanying sound effect (“CHOOOM!”) if that sort of thing makes you happy, and if you’re a UK-based superhero fan there’s no reason it shouldn’t.

Part 2 of the story, “The Shadow of War”, kicks things up a notch with a surprisingly brutal hostage rescue mission, one that interrupts an apparent rape. An opening quote from human rights speaker Bo Kyi feels slightly like it’s trying to politicize issues, to find a broader moral between the rain, the darkness, the mists of blood, and Woden throwing cars, but mostly Vanguard settles for being a neat bit of crossover genre fiction. One half James Bond, one half JLA, it even manages to culminate with a genuinely tense cliffhanger, something of a rarity in worlds where gods walk among us. Overall, Vanguard Issues 1-2 may not be exactly groundbreaking, but it does everything right, from scripting to establishing a cast. In short, it’s a good place to start and there’s seems to plenty left to look forward to.