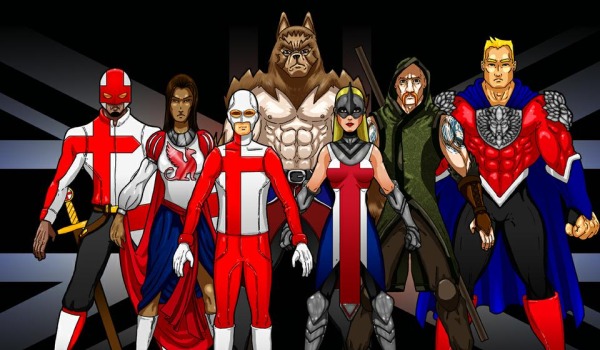 The world is on the verge of chaos: Russian missiles stand ready to strike at a moments notice, the UN has officially dissolved, and the UK is engulfed in rioting. The only thing that stands between mankind and utter destruction are the superhero teams that hold each nation in stalemate. Or are these teams part of the problem?

As Vanguard reaches its fifth and sixth issues, there’s the slight sense that creator Dan Butcher is not entirely sure himself, and, for the time being, seems content to bide his time on the story front.

The series’ interweaving plot threads continue to build independently of each other – Kingsguard’s biological rejection of his abilities, Gradlon’s defection to corporate sell-outs Team XTreme – but there’s no real sense yet of cohesion between. Meanwhile, supposed audience surrogate Ridley seems to have been relegated to a second-tier character.

The stakes are now higher than ever with Vanguard team leader Pendragon declared Public Enemy No. 1, but Vanguard itself hasn’t yet devoted enough time to the characters themselves to really make us care. The best superhero stories say something about what makes us human, but the focus here is very much on the development of plot.

Having previously compared Vanguard to the likes of James Bond and Time Crisis, the feeling here is more in the vein of 24 – a race against the clock – only the nature of the threat is vague, nebulous even.

Despite these criticisms, Issues 5-6 finally unveil a villain of sorts against whom the team must face, and, with through the subplot of Godiva’s return home – dropping off a care package of a gun and ammunition – suggests that Vanguard may yet develop a thesis on exactly what it is that makes a hero, powers or no.

With plenty on the action front and a diverse array of characters, Vanguard now needs to fully commit to using the pieces it has put in place to tell a story, instead of simply pushing onwards with no clear destination.