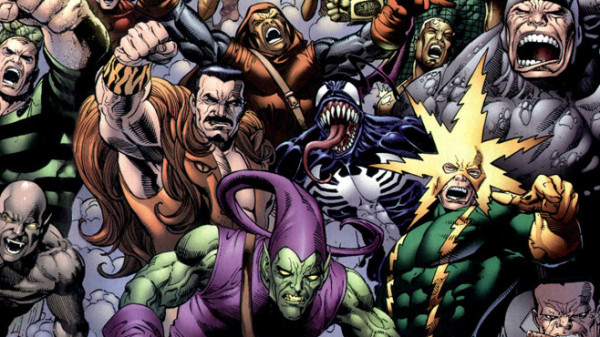 Let’s face it, Spider-Man has a really cool rogues gallery. Perhaps second only to Batman’s adversaries, Spidey’s villains are dangerous, psychotic and inventive. For the most part. Yep. In over fifty years of comics, there’s bound to have been a few blunders here and there. Well, I say blunders. Catastrophic mishaps that could only have been made due to a severe case of mercury poisoning seems more appropriate.

And with the latest Spider-Man film coming out this month, now seems as good a time as any to look at the top six worst chumps that Spidey’s ever bothered to fight.

DISCLAIMER! This list is done in no particular order and is my own personal opinion. If you disagree then we’ll just have to agree to disagree. Although you’d probably disagree with that too you uncooperative jerk, you!

Wow. Okay, the weird thing about this guy, well… one of the weird things about this guy, is the fact that he was created by Marv Wolfman. You heard me. The man who created Blade also created… this guy. Seriously, who would think that this would make a good Spider-Man villain? It looks like it belongs in Wacky Races or something!

So what’s his story? Well, a businessman named Jackson Weele… wait what? Really? His name is Jackson Weele? That’s like calling Catwoman Selina Katz or Captain America Steve Patriot or Professor X Baldy McWheelchair. Put some effort in! Anyway, after being blackmailed by Rocket Racer, another bad Spidey villain who just managed to avoid being on this list by a gnat’s wing, Jackson Badpun goes to the Tinkerer and commissions him to build him a giant mechanical wheel vehicle. As you do. He chases Rocket Racer all over the city until Spider-Man intervenes, resulting in him accidentally plunging into the river, where everyone assumed he died. If only that were true.

You see, after twenty Big Wheel free years, the character reappeared, having joined Vil-Anon (a rehabilitation program for super villains) in the interim. He may have given up crime, but he’ll always have a place in our hearts, that we’d rather he not occupy, as a terrible Spider-Man Villain.

Believe it or not, there are actually two versions of this character. There’s the first one, an Australian named Frank Oliver who could jump really high (That’s pretty much it), and the second one, an American named Brian Hibbs who idolised Oliver and created a suit of armour that looked just like a Kangaroo, complete with a tail and a cannon instead of a pouch. I think I know which of these two to focus on!

I mean, what in the name of Paul Hogan does he think he looks like? Well, obliviously a Kangaroo. That’s the whole point of it. It’s still stupid though. Brian purchased the suit after trying to defeat Spider-Man without it, an encounter which ended after Spidey knocked him out with a single punch. And, get this, Brian got the suit from “The Sharper Villain Catalogue”. The fact that such a thing exists explains so much about the Marvel Universe.

His second encounter with the wall crawler went a little bit better. After being punched, but not knocked out, by Spider-Man, he revealed his pouch cannon (I know, I know.) and threatened to use it against him. Spidey simply webbed it up, prompting Kangaroo to fire it anyway. Guess what happened? Yep. It exploded. His crotch actually blew up. That’s just embarrassing. Later, he would go on to join one of the worst Super Villain teams in comic history, the Legion of Losers. We’ll get to them later.

You can’t help but feel sorry for this guy. Ostracised from the moment he was born due to his mutant powers that granted him enhanced agility, increased strength and a simian like physiology, all Martin Blank ever wanted was to be accepted and loved. Awwww. Having idolised Spider-Man, he approached the wall crawler about the possibility of being his partner. And what did Spidey do upon hearing this endearing proposition? He laughed right in Martin’s little monkey face. You bastard Peter Parker! All he wanted to be was your friend! And you spat in his face. You cold, heartless monster! And what did poor Martin do after being rejected so callously? He swore revenge against Spider-Man and vowed to destroy him. Ummmm. I thought we were supposed to feel bad for this guy? Only, he turned to a life of crime rather quickly. Oh well.

Seriously though, Gibbon has the worst luck of any Spider-Man villain I have ever seen. Nothing ever goes right for him. He was part of the aptly named Legion of Losers (Seriously, we’ll get to that!). At Stilt-Man’s wake, he was poisoned and blown up by the Punisher, having to have his stomach pumped and losing all his hair. He was married to Princess Python who became fed up with him due to his constant losing streak. He’s tried to be a hero and failed. He’s tried to be a criminal and failed. The guy just cannot catch a break. The closest he has come to being a hero is during the Marvel Apes storyline, where he in transported to a dimension where all the superheroes are monkey versions of themselves. All I hope is that he gets a chance to say “You Maniacs! You blew it up! Ah, damn you! God damn you all to hell!”. Hey, we’d all say that if given half the chance.