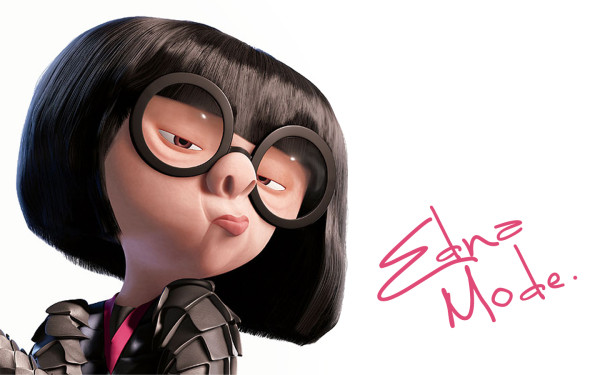 Since I was asked to write an article on superheroes costumes, I have had a little bit of difficulty. Mainly because I have as much fashion sense as a penguin dressed as a character from Tron. So, I decided to get a guest writer to come here and help me out. And who better than a person who not only knows fashion inside and out, but who has actually designed many a superhero costume herself.

She agreed to take a break from working on the sequel to her hit film, Pixar’s The Incredibles, so please welcome Edna Mode! Hi Edna, thanks for doing this.

“Not at all dahling. There are so many mediocah suits out there, I simply MUST see them. And then insult them.”

So which one should we look at first?

But… but… I’m the actual writer here! I need to-

I really think I ought to–

Ow! Okay, okay! Stop hitting me! They’re all yours. Geez.

“Scruffy cretin. Anyway, gather round dahlings. This is the most hobo suits evah!”

Oh, no, no, no, no! Firstly, the armah, it is no good! Unless you have super strength, it is too heavy! What if there was a school bus full of children in a rivah slowly sinking to a watery grave? What then? You jump in to save them? Feh! You’d sink fastah than it would take to blink! Then there is the fact that this isn’t even metal! What is it, plastic? This is not 1985, dahling. We do not weah recyclables anymore!

And the helmet? What-were-you-thinking? There are bettah ways to protect your identity. How long did it take you to mold that thing onto your head? Time wasted! And a hammer? This is not Lord of the Rings, dahling. Ha! Now, there were some costumes! And armah made sense. Are you fighting goblins, Steel? Are you? No! You are fighting Bendah from The Breakfast Club. You don’t need armah! Having said that, I do like the shaft, very nice. 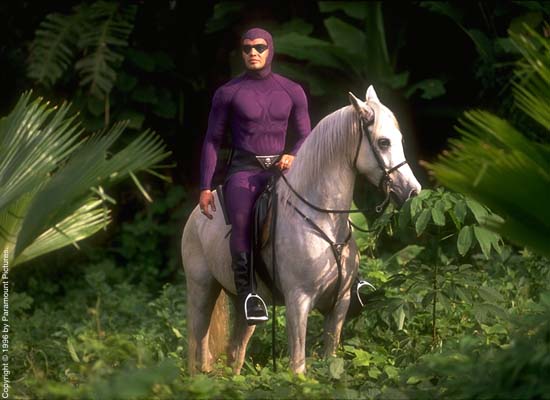 Ugh. Purple is so sixty years ago. And there’s nothing else to talk about! It is so simple. So boring! The mask is fine but at least have an insigniah, dahling. And don’t you live in the jungle? Why wear purple? There are so many shades of green that would work! Or black. You cannot go wrong with black. I made Fironic’s suit black. Looked good. Sleek. Very slimming. NOT PURPLE! Ghost who walks? More like ghost who doesn’t understand the meaning of stealth!

And why the headpiece? How do you make that covah the head? You need some kind of tape, surely. Gets in hair though. Very painful. And how exactly is it you are able to remove your eye makeup aftah taking off the mask? The purple I can accept. Breaking the laws for physics and make-up artistry, I cannot.  I’m fed up of looking at you, dahling. Go away!

Oh, dahling where to begin? The headband. No. It is not even a headband. It’s a tiara! Why? There is no reason! And the yellow. Yellow is so twenty years ago. You cannot go out like that.. But we are just getting started! Those boots! You are not Robin Hood so do not try to be! You cannot get much arch support anyway.

And what is that on your waist? A chain? You have heard of this little invention, been around for a while, quite popular in some places- A BELT? How difficult it must be to take your pants off, dahling! I cannot imagine. All this I could forgive, if it were not for the plunging neckline. At least button up the shirt dahling, I want to see you, but not that much. Unless you want to shock people at the Academy Awards, this is sheah stupidity. No, no, no, no, you simply must change. Go now! I’m done with you.

Hmmm. Not bad. Not bad. The top is simple yet stylish. The lighting bolt is a good touch. Didn’t go with the one piece. Risky but it seems to be working. I suppose I can overlook the fact that he’s just wearing a t-shirt and jeans but- Wait… what? Why do you have a bowl on your head? You fool! I thought you were the Flash? How does that help you run? How does it stay up there? That cannot be aerodynamic, dahling. The wings are fine but the helmet is UNACCEPTABLE! You are not Hermes, dahling. The gods can get away with poor fashion choices, you cannot!

And wings on the boots? Why do you have wings on your boots? Feh! What does that that add to the suit? Nothing! It is useless! I have no time for useless things! If it adds nothing, it IS nothing! At least on the head it makes a little sense, from an aesthetic point of view, but on the ankles? Out! Out-out-out-out-out-out!

Excuse me, DC. May I have a word with you? Come closah. Closah. That’s it. Now listen carefully… WHAT WERE YOU THINKING!?!? This is not only an affront to fashion, it is an affront to women! But I am not here to discuss gendah politics, merely the suits. And this suit FAILS! FAILS-FAILS-FAILS-FAILS! Who goes into battle dressed like that? No one sane! She might as well weah nothing at all. It would save on meaningless fabric and might distract the enemy long enough for her to win!

And there is not enough tape in the world to keep… those… concealed like that. Seriously, dahling, I know you’re a super but that just defies the laws of physics. And taste. A violation of two things a super must hold dear! There is no excuse! No! You will change right now into something more appropriate! Right now! I’m waiting! I can wait all day if I have to dahling.