Home » 7 Awesome Kaiju Who Should Be In Godzilla Sequels 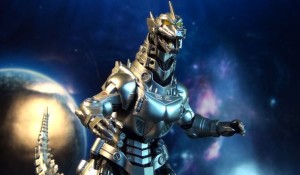 MechaGodzilla is a terrifying machine of death and destruction, and one of Godzilla’s greatest foes. There have been three incarnations of the character. The first appeared in Godzilla vs. MechaGodzilla, created by evil ape men and disguised as Godzilla. Anguirus attacked the faker, but MechaGodzilla ended up breaking his jaw off. The real Godzilla showed up and exposed MechaGodzilla’s true form, a pretty intimidating robotic replica of the King of Monsters. MechaGodzilla has a variety of weapons, able to fire missiles and darts from any part of his body, can shoot laserbeams from his eyes, can fly, and spinning his head around creates a forcefield. Godzilla fights him twice, aided the second time by Okinawa deity King Caesar. Godzilla got struck by lightning earlier in the film, and becomes really magnetic, dragging MechaGodzilla into his grasp and he twists the robot’s head off. MechaGodzilla returned in Terror of MechaGodzilla, battling Godzilla with the brainwashed Titanosaurus, but is terminated for good.

The second incarnation appears in Godzilla vs. MechaGodzilla II. This version was built by humans as a defensive weapon against Godzilla, using the reverse-engineered technology used to make a mechanical King Ghidorah, and has a special diamond coating to prevent damage from Godzilla’s atomic breath. MechaGodzilla was controlled from within by human pilots, and had a powerful arsenal, including the Plasma Grenade, which could absorb the energy of Godzilla and Rodan’s attacks and aim it back at them. MechaGodzilla battles Godzilla and Rodan, but kills Rodan. Rodan uses his radiation to heal Godzilla as well as melt MechaGodzilla’s diamond coating, and the robot is obliterated, though the pilots escape.

The third incarnation was called “Kiryu” for some reason, and appeared in Godzilla Against MechaGodzilla and Godzilla: Tokyo SOS. This MechaGodzilla was made by mankind, but was built over the skeleton of the first Godzilla, killed in by the Oxygen Destroyer in 1954 (the series had three distinct continuities, with only the first film remaining canon in each one). Kiryu was armed with the Absolute Zero cannon, which can freeze things solid. Unfortunately, the dead Godzilla’s mind took over, MechaGodzilla went on a rampage, and in Tokyo SOS, departed the series with his second incarnation to parts unknown. MechaGodzilla is a very popular Toho Kaiju and would look fantastic in the American films. Perhaps his second incarnation’s backstory could be used, built by humanity to eliminate Godzilla after failing to destroy him. 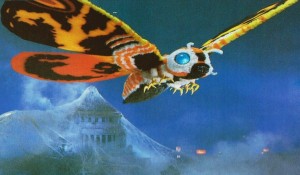 Mothra is the most iconic Kaiju after Godzilla, and a recurring character in the franchise. This giant moth is not actually a villain but usually takes on a heroic role, and is a guardian of Earth’s nature and peace. Debuting in 1961, Mothra is a demigod from a pacific island, often accompanied by a pair of fairy-like priestesses called the “Shobijin”. Mothra is a benevolent Kaiju, but will not tolerate people defying the laws of nature, and can be a dangerous enemy if anyone messes with her eggs, baby larvae, or the Shobijin.

Mothra stands out from the other Kaiju for her unique and colourful appearances, not to mention her status as a good monster. Mothra’s first appearance in a Godzilla film was in 1964’s Mothra vs. Godzilla. Mothra’s egg appears on a beach and is nearly used as a tourist attraction by an evil Japanese businessman. Godzilla shows up to cause trouble, and Mothra eventually hatches into twin larvae who chase Godzilla off with silk spray. Mothra, or at least one of the larvae, teams up with Godzilla and Rodan in Ghidorah, the Three-Headed Monster to battle King Ghidorah. Mothra went to make countless appearances in the Godzilla series, in all three continuities. We met Mothra’s counterpart Battra in 1992’s Godzilla vs. Mothra. Battra is not evil, but cares little for humans and those which wish to disrupt the natural order of things.

My favourite incarnation of the character is in Godzilla, Mothra, and King Ghidorah: Giant Monsters All-Out Attack, where Godzilla is the badguy again, and Mothra, horned dog-like Kaiju Baragon, and even King Ghidorah are all ancient guardians meant to save the world from Godzilla. Mothra appears as an egg again in a lake, and later hatches into her moth form, flying off to battle Godzilla in Tokyo. Mothra is a pretty awesome and kickass character, but the question is would western audiences take a giant moth seriously in a disaster movie? 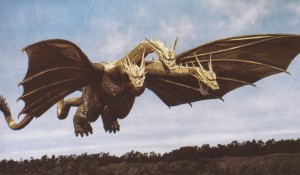 Where there is Godzilla, there is King Ghidorah. This space-faring, lightning-spewing, three-headed dragon is Godzilla’s arch nemesis and has appeared many times in the series. King Ghidorah has had a number of roles – arch nemesis, alien-controlled weapon, and even been a good guy on one occasion. Like MechaGodzilla, Ghidorah has different origins depending on the film continuity, but has been a formidable adversary to Godzilla all the way through.

King Ghidorah debuted in Ghidorah, the Three-Headed Monster, arriving from space to destroy the world, until repelled by Godzilla, Mothra and Rodan. During the course of the first continuity, Ghidorah is either controlled by aliens or comes to Earth of his own volition to cause havoc, only to be defeated by Godzilla. Perhaps his most spectacular defeat was in Destroy All Monsters, where every Kaiju in the vicinity teams up to beat the crud out of King Ghidorah. The second continuity had time travelling aliens alter history, so that the dinosaur that would become Godzilla was replaced by three creatures called “Dorats”, who are exposed to radiation and fuse together to become King Ghidorah, who is used by the aliens to terrorise the world. Godzilla showed up anyway, kicked Ghidorah’s ass and dumped his body in the ocean. The aliens recovered the dragon and revived him as Mecha-King Ghidorah, and the battle with Godzilla ends in a stalemate.

In the third continuity, Ghidorah is depicted as a good guy in Giant Monsters All-Out Attack, appearing as an ancient guardian meant to prevent Godzilla from destroying Japan. But soon the character was reintroduced and reinvented as a villain, appearing in Godzilla: Final Wars, as a mysterious new Kaiju called “Monster X”. Godzilla and Monster X battle in the ruins of Tokyo, where the latter transforms into King Ghidorah for a final battle with his arch enemy. The two fight, and Ghidorah meets his demise where Godzilla blows up two of his heads and launches him into the sky, obliterating him with an atomic breath. If there was one Kaiju who should be in any American sequels, it should be King Ghidorah.

How awesome would it be to see Godzilla fight King Ghidorah or other Kaiju from a western perspective? Which other Kaiju deserve a spot in sequels? Could Godzilla have a crossover with Pacific Rim or even with Gamera? Sound off in the comments or send us your thoughts on Twitter!