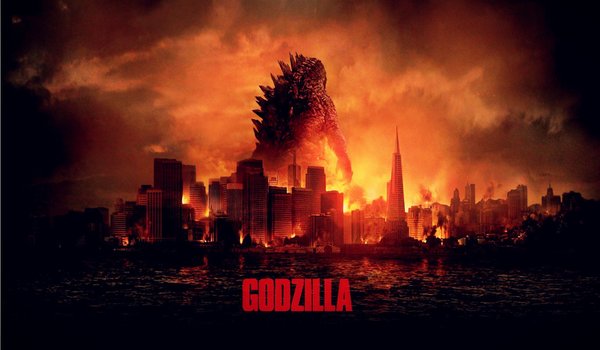 Godzilla is sixty years old this year. In 1954, Toho introduced him to the world to trash cities and spread a message of nuclear anxiety. He went on to fight other Kaiju, become a hero, a father, an environmentalist, a silly kid friendly character, became a badass force of nature again with traits of an anti-hero, and went into retirement in 2004 with dignity and might. Then TriStar got the rights and insulted the name in 1998’s mess of a film. So, sixty years on, Gareth Edwards took the helm to give it another go with the 2014 Godzilla film, and I’d say the shame emitting from those who watched the 1998 has finally been lifted and America can be forgiven. The 2014 film is pretty spectacular and just blew all of my expectations out of the water, though not without flaws. Godzilla is back on the big screen where he belongs.

Please note this review will contain spoilers, so go watch the film rather than read this first.

An important thing to remember is the 1954 film dealt with nuclear anxiety and the fear of being killed by radiation and nuclear weapons, as had happened to Hiroshima and Nagasaki in World War II. This film repurposes the anxiety through other means, making it integral to the story. There are also some clear nods to the Fukushima power plant troubles that occurred during the 2011 Japanese earthquake that left many areas quarantined. The film opens with an old 1950s film reel of nuclear tests, though as we see, there are traits of a giant monster lurking in the footage and actually being targeted by the nuclear weapons. The idea of this film was to treat Godzilla as a natural disaster, and we see a large amount of the aftermath of his destructive path and that of the other Kaiju in the film. There is more of a human focus on this film, but all of the Godzilla films have done this, though perhaps not in the same capacity. But, hey, at least Matthew Broderick is gone.

Anyway, to the film’s story. In the 1950s, American nuclear tests led to the awakening of Godzilla (or “Gojira”), an enormous ancient dinosaur who survived in a time where Earth was drowning in radiation, and is a walking titan of destruction. The world governments tried to nuke him after an incident in 1954, but it didn’t work, so they instead covered up his existence and Godzilla disappeared for sixty years. In 1999, a strange occurrence levels Janjira Power Plant in Japan and the surrounding area is quarantined. The plant supervisor Joe Brody (Walter White himself Bryan Cranston) has become a crackpot conspiracy theorist after his wife died from radiation poisoning. When arrested for going into the quarantine zone, Joe’s estranged son Ford (Aaron Taylor-Johnson) comes to get him out, but despite his exhaustion with his dad’s beliefs, the evidence seems to be overwhelming so they the two go into the quarantine zone again.

Joe and Ford venture into the quarantined Janjira district to find their house and retrieve some old floppy disks containing reports Joe had of the plant’s activity on the day of the disaster. The scenery of the rotting city remind me of the anime Coppelion. However, it turns out all is not what it seems as there is no radiation in the district, and soon the Brodys are found by the police and taken to the old power plant, where they discover the cause of the plant’s meltdown was caused by a giant insect-like monster referred to as a MUTO (Massive Unidentified Terrestrial Organism). Earlier in the film, Godzilla groupies Dr. Serizawa and Vivienne Graham (Ken Watanabe and Sally Hawkins), discovered an underground chamber of fossils and second MUTO bug cocoon. The MUTO hatched and was drawn to the nearest nuclear energy source, namely the power plant after being in a form of hibernating state for a millennia. The MUTO awakens from its hibernation and goes on a rampage before flying off.

As the MUTO goes looking for more radiation to eat, a second larger, female MUTO hatches from the cocoon founded by Dr. Serizawa to cause more chaos. Ford takes centre stage as he tries to get home to his wife Elle (Elizabeth Olsen) and son in San Francisco and becomes involved in the US Navy’s plans to nuke the MUTOs and Godzilla, even though it hasn’t actually worked before. Dr. Serizawa puts his faith in alpha predator Godzilla, who arrives from the depths in Hawaii to hunt down the MUTOs as well as do some major property damage in the process. It all comes to a pretty awesome third act when the two MUTOs meet with the intention on breeding and making San Francisco their new hellish-looking nest, while Ford skydives in to retrieve the stolen nuclear weapon from the MUTOs. And then Godzilla shows up to kick some rear. It’s awesome.

I would have to say the greatest aspects of the film are obviously the Kaiju, but also the visuals, camerawork, and use of suspense (most of the time). There is some pretty exciting build-up to Godzilla’s arrival as well as some genuine intrigue to what caused the power plant meltdown, even though it is predictable that a monster was responsible. However, in contrast, the film has a nasty habit of teasing us with Godzilla and then jump cutting away to another scene with the humans. The first time Godzilla is shown on screen in all his majesty, he lets out his iconic if modified roar, and just blows you away. Then, it abruptly cuts to the next day where we see Honolulu, Hawaii has been trashed, but Godzilla and the MUTO are gone. This happens again later on when the female MUTO arrives. We see her heading towards Las Vegas to do some stomping, and then we suddenly cut to a team of firemen rushing into a hotel to evacuate it, and find a wall missing with the aftermath already in progress.

Thank goodness that the last thirty minutes of the film make up for all the teasing. There is a particularly exciting moment when Dr. Serizawa says that Godzilla and the MUTOs should be allowed to fight. Then it cuts to San Francisco where the male, flying MUTO emerges from a fog and zooms by a skyscraper while visibly resembling Rodan. Elle runs away only to stop when Godzilla appears in the opposite direction, and you just know some serious epicness is about to go down. Unfortunately, the film cuts away when Elle runs into a shelter, just as the Kaiju are about to fight.

As I said, the film’s visuals are pretty breathtaking and Gareth Edwards really shows his skills with the sweeping camerawork and shots that hang on the screen long enough to me to take it the scenery and devastation the Kaiju left in their wake. Every shot feels like it means something, and there is not a single wobbly, jittering camera shot anywhere like you’d see in Transformers. In opposition to my complaint about the lack of seen carnage, the shots of the destruction are jaw dropping, with some looking very similar to real life tragedies and disasters. This is a side of a Godzilla film never really examined before. The Japanese films often deal with the monsters, the battles, and the army’s pathetic attempts to kill the indestructible monsters, but this one showed the damage done by all the chaos and reminds us how Godzilla is a symbol of destruction.

The acting and human characters are a mixed bag. I enjoyed Cranston’s performance, though I wish he had a bigger role in the film beyond what the trailers teased. Heck, he was portrayed as the main character in the trailers. It seems a bit of a cheat. Watanabe played Dr. Serizawa, who is implied to be the son of Daisuke Serizawa of the 1954 film. Watanabe does a decent job, but doesn’t really expand much beyond the scientist with all the exposition archetype. David Strathairn plays a naval admiral who fantastically does not become the stereotypical ignorant general who ignores the smart people and tries to bomb the monsters, but is a reasonable, open-minded man who asks Dr. Serizawa for advice, sympathises with his plight, and even apologises for having to use nuclear weapons. It is a breath of fresh air to see a military character who isn’t an asshole.

Unfortunately, the weakest performances come from Taylor-Johnson and Olsen. Olsen literally has nothing to do in the film; her character has no real personality or motivations beyond getting her son to safety, and we know nothing about her. There is just enough human drama to keep us following Taylor-Johnson, but he spends most of the film with a blank expression on his face. I got a bit frustrated at his emotional constipation.

Of course, we have to discuss the actual stars of the film, Godzilla and the MUTOs. Godzilla has one hell of a presence in the film. I know a lot of people have been whining about there not being enough monsters onscreen, but the 1954 film was quite similar in that fashion. However, Godzilla at least has a presence in this film right from the start. You are cleverly deceived into thinking Godzilla caused the power plant’s destruction, and then get surprised when he emerges from the ocean when the navy are chasing the male MUTO towards Hawaii. He spends a lot of time underwater with only his back spines on display, but his sheer size and presence is enough until his awesome entrance later on. Godzilla is more of an anti-hero than an outright villain. He shows signs that he has no quarrels with humans, tries to avoid as many casualties as possible, and even takes naval fire to try and stop the destruction of the Golden Gate Bridge.

Then, there are the MUTOs. These two monsters are great fun on the screen. When the male MUTO first emerges from his cocoon, I got the impression it may have taken traits from the Cloverfield monster, mostly in the way he walks. When in flight, he looks a bit like Rodan, and his face bares some resemblance to that of Orga. The female one was even bigger and while she couldn’t fly, she is still powerful enough to take on Godzilla. But despite being the badguys, they are treated like actual animals. They aren’t evil, but rather just want to find each other, mate, and make a nest for their offspring. There is a strangely charming moment where the two MUTOs come together and have a courtship moment, and the male gives the female a stolen nuclear warhead as a gift of sorts. And later on when Ford destroys their nest, the female MUTO is visibly horrified at her loss, and the male MUTO ditches fighting Godzilla and flies to her side to mourn with her.

The special effects on the Kaiju are pretty impressive and some of the best I’ve seen, right up there with Gollum and Smaug. I also liked the music too, or at least what I remember of it. The music used around Godzilla and during the skydiving sequence were great and really ramped up the suspense and tension of the film. The nods to the Japanese sequence are a bit low beyond the 1954 film, but there are some references to at least Mothra and Rodan.

In conclusion of this lengthy review, I believe that Godzilla is a very entertaining film, and since a sequel has already been greenlit, I hope that will be just as fantastic. So, I say bring on Mothra and King Ghidorah in the sequel. Godzilla is still King of the Monsters. Welcome back!

Are you a Godzilla fan? If you’ve seen this film, would you consider it superior to the 1998 film? What would like to see in the sequel?Sound off in the comments or send us your thoughts on Twitter!