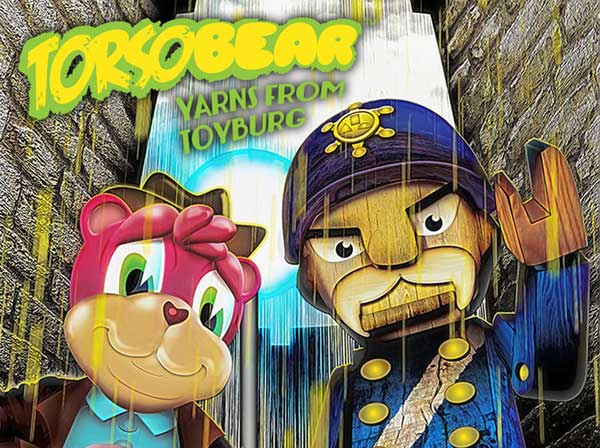 Now entering its final week on Kickstarter, Torsobear: Yarns From Toyburg is an anthology comic featuring 11 stories all set in the world of Toyburg. Spearheaded by Brett Uren, who also wrote the original story that inspired the anthology, there are many talented writers and artists working on Torsobear. We had a chance to speak with several of these citizens of Toyburg and ask them about this amazing comic!

1. Can you give us a quick insight into your story within Torsobear?

Randy Haldeman (Line Artist, “Sour in the Sweet”): “Sour in the Sweet” is exactly what the title says. Jake Young wrote a fantastic short about one toy soldier’s bout with his current life and how it stacks against his many travels from the past.

Glenn Møane (Co-editor of the book, writer on “The Collector”): The story is about the tin elephant Officer Nelly, and his encounter with Stretcho Savage – a brutal stretch doll who’s been extorting buttons from innocent toys. In the confrontation that follows, Nelly will learn about an horrible, otherwordly entity called “The collector”, which is the title of the story.

Cy Dethan (Writer on “Some Assembly Required”): “Some Assembly Required” is the story of Snaplok, an 80s action figure struggling to live down a villainous past, who’s implicated in a string of violent robot-part robberies. With the police breathing down his neck, he sets out to crack the case and clear his ruined name – only to discover a far greater villainy than his own at work in the underbelly of Toyburg. Essentially, it’s a noir-influenced story about someone trying to break out of the mould he’s been literally cast in.

Harry Saxon (Colourist): I coloured two stories, “She Sang For Buttons , She Unstitched My Heart” and “Home Invasion”. In the first we get to see a part of Ruxby’s past and in the second we get a taste of what happens when you leave a bear cub home alone watching scary movies. But I’m sure the writers can say more, I’m just a colourist, sometimes I don’t even read the scripts I’m given! (No, that’s a blatant lie.)

Brockton McKinney (Co-writer on “Home Invasion”):I had the pleasure of collaborating with Torsobear creator Brett Uren on a tale we’ve entitled “Home Invasion”. I tried to bring my weird sense of absurdity together with his dark and witty noir­feel. We ended up with the Reese’s Cup of comic book shorts. It tastes awesome and is incredibly bad for you.

Janos Honkonen (Writer, “The Big Wind-Up”):   When I read the original Torsobear comic, a very specific idea popped to my mind: I wanted to write a story that took place in The Olden Times of Toyburg, at a time when men were wind-up and women were porcelain, money was old but a new sort of workforce and economy was filling the streets. I find old toys fascinating, since to a modern eye they are creepy, and at the same time weirdly crude and overwrought. Think about old harlequin dolls or wind-up robots, and things like that. I also wanted to build some depth to the character of Hazbrow – why was he such a horrible, old racist. So, my story that is called “The Big Wind-Up” [and] takes part in a setting that’s a mix of immigration times New York with a dose of European aristocracy and toy logic thrown in – of course with ties to the main story arc of the anthology.

Kieran Squires (Writer and artist on “A New Hopelessness”): Every story needs a revolution. Every story needs and rags to riches hero. Every story needs hope. We need to know that when given the opportunity we can all rise up and make a difference to the world, no matter who you are or where you’re from. Now combine that ethos with the worst knock off toy you can find and you’ll have a strong insight into where my story is heading! “A New Hopelessness” is a biographical epic about the journey of one toy from the edge of despair to the heights of inspiration in a savage world of corruption and indignity. Can one toy make a difference?

Grainne McEntee (Writer on “Rich Toy, Poor Toy”): “Rich Toy, Poor Toy” gives a little snapshot into the life of Ben Barsun, a down and out grifter toy who charms and smarms his way through Toyburg, parting other toys from [their] buttons and their body parts to trade on the parts black market.

Check out the Torsobear Kickstarter!

Read on to see why anybody would get involved in a comic about toys in the first place!