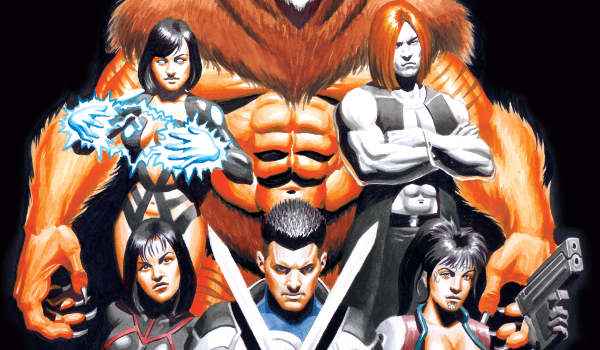 Boasting a great central concept, Alpha Gods is a British series that takes aim at epic American blockbuster comics standards – and does so incredibly well!

In the future, extra humans – anyone who’s human and a bit more, like mutants, cyborgs or aliens – are policed by a centralised agency, which has just formed its own strike squad, the Alpha Gods. We’re pretty much chucked into the middle here as the first two operatives- cyborg Paladin and augmented gun freak Impact blast their way through a compound investigating claims of experiments on extra humans. The banter flies thick and fast, with some great character work by writer Ian Sharman. After a disastrous meeting with villain Omega, we get introduced to the rest of the gang as they’re picked up by the lead agent in charge of the team, Alpha. There’s Juice, a mutant with electricity powers; Revenant, who can phase through walls and turn invisible, and Outrage, a lycanthrope. Juice and Outrage are both introduced while fighting off bad guys on the street, and Revenant shows up during the course of one of his own operations; introducing the characters via discrete snippets of action is a neat little mechanic, one that should be familiar to watchers of big budget TV and film. One more member is gained during the set-up book “Emergence”, after which Sharman jumps straight into the over-arcing narrative in “Betrayal”. It’s hard to judge a plot that’s still in progress, so I’m going to leave that to one side and focus on the craft of the comic: the art and writing style.

For art, we’ve got a mixed bag. The most important things are there, and in abundance. The character design is ace, each character immediately unique but obviously part of the same world; with such a diverse cast of extra humans, it would be reasonable to expect at least one or two to get lost in the crowd, but this just isn’t the case. Some designs are particularly worth taking note of: the Nephilim leader and all-round nasty piece of work Malak is a grotesque figure, and Omega, his henchman (and possibly more) has a bright green suit with red eyepieces that can only be described as ultra-strange and super-hi-tech. Importantly for a comic with widescreen ambitions, the framing is dynamic, the colours punchy and the action pacy. During fights, panels pop all around the page, rough hewn and vibrant; during more stylised action sequences, broad panels without dialogue lovingly portray acts of highly choreographed violence.
There are some issues, particularly during close-ups, with some of the expressions looking a little… off? The lines look a little unclean, and it breaks the glossy tone of the rest of the art (could be down to reading a review PDF instead of an actual printed edition). A related issue occurs with Revenant; characters continually refer to him as having snow-white skin, but this doesn’t seem to be the case in most of the comics. I think this is more likely down to the colours from Mauro Barbosa, as artist Ezequiel Pineda‘s black and white sketches are included in the special edition and show none of the problems exhibited in the coloured version. The issue improves over time, as Barbosa settles in with the characters (his work in Betrayal #1 is testament to that). This is hardly a deal-breaker, as Barbosa also brings a vivacious palette to the table in those all-important fights, and proves a deft hand at dealing with intricate machinery of the type often displayed on-panel. The colourists in the later books, such as Yel Zamor, continue this trend with a bright, blockbuster feel.

As I mentioned earlier, Sharman’s dialogue work is spot-on, and this helps the comic tick along at a great pace. The characters are well-defined, fitting into defined superhero team roles without feeling cliché or tired. The arc that’s slowly building looks amazing, and is a definite incentive to return – there’s lots of schlocky action, intermixed with alien and angel intrigue. There are a few sour points here and there – in one scene, Juice tells a female character emphatically that she shouldn’t kiss women, as girls are supposed to kiss boys. There’s more to the scene than I can reasonably put down here, but this felt quite a jarring statement to make, and the fact that it’s not challenged makes it a little unsavoury. I’m pretty sure Sharman’s intent wasn’t to make this claim persuasive or anything- after all, Juice is a 14-year-old girl, and so isn’t an ideal mouthpiece for authorial intent, and not the most reliable character. The fact that Sharman’s Orang Utan Comics company also publishes books with a trans-hero (Shrapnel) and another with a gay hero (Elemental Micah) makes it unlikely they’d publish something pointedly homophobic. My hope is that this all comes out in the wash later on, and that there’s some character work I didn’t see coming, for which there is some precedent. Since I’d like to end on a positive: “Betrayal” ends on an incredible twist and I’m definitely ready for more!

The most important aspect of Sharman’s work is that he takes a concept that is very much pulpy and larger-than-life, that of extra humans, and turns it into a believable story via some great character writing. It reminds me of a similar trick pulled off by Chris Claremont when he started writing X-Men, and I really believe the writing here is of the same high calibre. This level of writing, combined with Pineda’s strong art, makes Alpha Gods an absolute must to pick up!

Find out more about Alpha Gods and pick up a copy of your own at AlphaGods.co.uk!