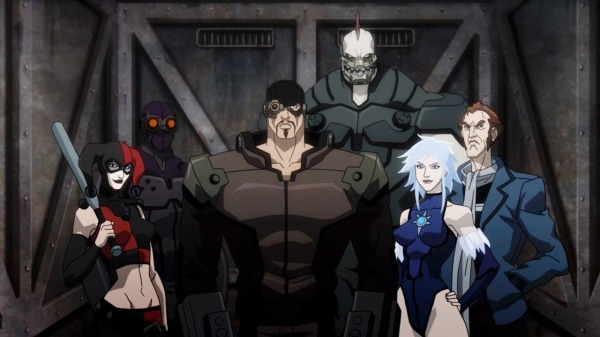 A film about the enemies and finally, not the hero! Batman: Arkham Assault delivers an amazing in-depth look at The Suicide Squad being sent into the infamous hospital of villains for one simple task….to kill The Riddler. Right off the bat I knew I was going to fall in love with this film simply because of my love for Edward Nigma, who in my opinion is one of the most underrated villains who doesn’t nearly get enough attention from the DC Universe.

The team of Black Spider, Captain Boomerang, Deadshot, Harley Quinn, Killer Frost, KGBeast & King Shark make up one heck of a hellacious group! They are all hired by a woman, Amanda Waller. Any member who wishes not to obey her orders will pay a hefty price by having their head blown off by a bomb that is implanted into the back of their neck. KGBeast believes this to be a bluff and falls victim to Waller’s promise before the mission even begins! The team is dropped off into Gotham City at night where they are to rendezvous with The Penguin. He supplies them with the guns and equipment needed to break into Arkham. Now you may be asking, where is Batman during all of this? Won’t he try to protect The Riddler from assassination? But of course…once he finds a dirty bomb who’s only location is known of course by The Joker.

Once inside of Arkham, Harley Quinn creates a distraction by being a nuisance to the nearby guards. She spots The Joker in a cell and becomes infuriated! The rest of the team sneaks into the hospital unnoticed, until Batman shows up and fights Black Spider.  The Suicide Squad splits up to cover ground and attempts to look for The Riddler. He is found by Killer Frost. As she is about to end his life, he informs her that he knows how to permanently disable all of the bombs currently inside of the teams’ bodies. As this exchange is happening, The Joker manages to free himself and opens the cells….allowing the inmates to run amok! Strapped into chairs.The Riddler prepares the team for shock therapy.

But Amanda Wallace has been keeping tabs the entire time and soon realizes that The Suicide Squad are planning to double-cross her. King Shark and Black Spider are soon left in their chairs without heads. As the police are made aware of the chaos spreading around, they soon arrive and begin to battle the inmates.

The Joker sees a seamlessly helpless Batman in pain shuffling down a hallway. Black Spider soon enters the room in which his fellow Squad members are going through the shock therapy. We are made aware that this is indeed NOT Black Spider! Earlier in the film, after Batman defeats Black Spider, he switches costumes! The Joker begins to realize this and quickly channels into a violent rage. The remaining Suicide Squad members escape and begin to wonder just how they will get off of the island that the hospital is home to.

Battling the police and inmates, all members of the Suicide Squad perish but Quinn and Deadshot. Batman confronts The Joker and learns that the dirty bomb that he’s been looking for all along is hidden within the trademark mallet that Harley Quinn carries around. To me, this was a total twist! Deadshot escapes by stealing a helicopter and heads back towards Gotham City. He soon realizes though that he is heavy with 2 villains: The Joker and Harley Quinn. As they begin to battle for control of the chopper, Batman arrives and takes control of Harley’s mallet thus defusing the dirty bomb. Throughout the commotion, the helicopter hits a building and soon barrels out of control. Deadshot manages to escape as the chopper crashes into a skyscraper, leaving The Joker laughing manically as he plunges to the ground. The chopper explodes and we are made to believe that The Joker has died….but of course this isn’t true.

Batman’s most vile nemesis perishing in an exploding helicopter? No way! He escapes, but we are not made aware of where he goes.  The final scene takes the cake for me, and that is saying allot based on all of the amazing scenes throughout this film. Amanda Waller is seen sitting at her desk in an office building many floors up. She turns around and realizes that she has mere moments to live. We see Deadshot on the roof of a nearby building looking into the scope of sniper rifle. The film cuts to black! Amazing! This is truly a film that tops DC’s Animated Work of Films.

The voice-acting is spot on, the film isn’t afraid to be violent at times which caters beautifully to the mature audience, along with being smart and fun! What more could you ask for but having a jolly good time?! Interesting question…..and yet who was The Suicide Squad set out to kill again?

What do you make of Batman: Assault on Arkham? Let us know in the comments section below!