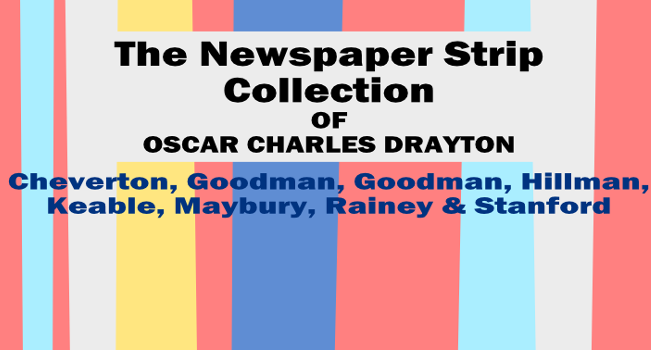 Some comics lend themselves to being reviewed quite easily, but others make the life of a reviewer a bit more difficult. And then there’s The Newspaper Strip Collection of Oscar Charles Drayton, which lands just shy of absolutely impossible.

The Newspaper Strip Collection of Oscar Charles Drayton is just what it says on the tin: a collection of comics from the Daily Inspector, collected by Oscar. Each page features five different comics: Catgirl Crisis Comics, West, Space Babe 113, Run Pussy, and Favourite Crayon as they appear each day in the Daily Inspector newspaper. As the story progresses, the collection starts to include annotations from Oscar, who starts to believe that the strips are predicting his future. By the end, the fourth wall seems to have completely crumbled, and Oscar’s tale reaches its climactic conclusion.

[Sounds stupid to me. Who the hell wants to read something that’s been annotated by some crazy person?]

The various strips (which are all real webcomics) are interesting in and of themselves, and the fact that each seems like fairly standard fare for newspaper strips is one of the book’s strengths. [Is he really going to talk about each strip individually? That’s gonna take forever!] Each [He is!] is a very different genre from the next. Catgirl Crisis Comics is a fairly normal humour strip about anthropomorphic cats as they go on holiday and put on a play. West is a classic western tale with a supernatural flavour [what a lame metaphor] while Space Babe 113 is a bawdy sci-fi adventure that gets a bit nuts and includes a pair of talking knickers [if that was a metaphor, I don’t get it]. Run Pussy and Favourite Crayon are both very classic newspaper strips, with Pussy centring on a dog and the other animals he encounters (including his fleas and his master) and Crayon serves as a family comic in the reminiscent of Archie and Family Circus. 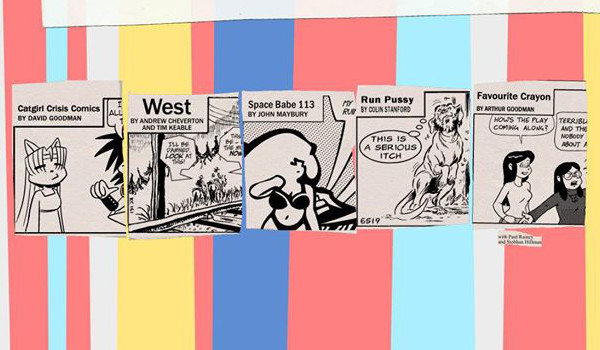 [He’s not gonna start talking about the artwork of each strip is he? Because that last paragraph was boring enough.]

The interaction between the strips and Oscar… [oh good, not the art] Actually, scratch that. The art of each of the strips is [he’s talking about the art!] all very much in that newspaper style: simple, black and white, 3-4 panels [is he actually talking about the panels?]. I especially liked the effectiveness of the shading in Run Pussy: I always knew where the dog’s knees were [what is this crap? The dog’s knees?!?].

The interaction between the strips and Oscar [finally! Now we’re on to something!] isn’t nearly as interesting as the particular shades chosen for his highlighters. [What!] Just kidding! [Phew!] The interaction isn’t nearly as direct as one might think, but we’re still able to get a fairly clear idea of what is going on in Oscar’s life as he travels with his sister Rachael, meets an artist who may or may not be involved with one of the strips, and his subsequent spiral into madness. At first, the plots of each strip seem either spot on (like the Catgirls’ holiday) or completely out there (pretty much everything in Space Babe 113). But by the end, they all make a strange kind of sense, at least thematically, and the payoff is rather fun.

So, if you’re looking for something straightforward, simple, and easy, I highly recommend you go check out the sites for the webcomics used as the daily strips in Oscar’s collection. But, if you want something intriguing, meta, and a bit… [he’s running out of ways to describe the book!] unusual [stuck the landing!] then pick up a copy of The Newspaper Strip Collection of Oscar Charles Drayton. [And please forgive my attempt to break the 4th wall in a comic review!]

The Newspaper Strip Collection of Oscar Charles Drayton is available to buy here!