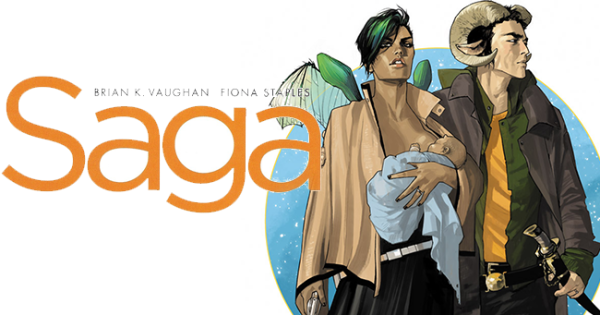 When any true comic book fan hears that a book has been written by Brian K. Vaughan, they always know that they are in for something odd and exciting. Vaughan has wrote some of the most memorable stories in the world of comics, from Y The Last Man to Ex Machina. His most recent and notable book is called SAGA which was first published on March 14th, 2012. The first paperback trade came out in October of 2012.

The first volume is broken down into 6 chapters. We begin with a man named Marco who is delivering his first-born child from his wife named Alana. They soon name their daughter Hazel (who narrates the story throughout.) Both Marco and Alana are of two different types of species in which their people are at war with one another. Right here, Brian K. Vaughan is channeling some Romeo and Juliet….but this story is much more wild than even Shakespeare could have thought of! Soon after biting off Hazel’s umbilical cord with his teeth, Marco discovers that his people are outside of the building that he and his wife are currently held up in and are ordered to surrender. Due to the fact that Marco has aligned himself with Alana, the enemy species, Marco has been now declared an enemy by his own people. Vice versa applies with Alana. They are now two outcasts on the run trying to survive both their fellow and opposite species whilst they raise an infant!

Take a breath because this is just the beginning! Baron Robot XXIII…..a man with a television for a head and the barrel of a large single-shot rifle for an arm…..heads the team pursuing the couple. Failing to comply, they burst into the room and offer one last chance for a yield.  As it looks like our couple is about to be killed, Alana’s people arrive! A battle soon erupts with our heroes caught in the middle with their infant who was literally just born! Alana and Marco escape with Hazel unharmed and flee.

Meanwhile, a new assignment is given to Prince Robot IV (another man with a Television for a head) who’s new assignment is to capture the fleeing couple. Around the same time, a bounty hunter named The Will is given the same assignment. His only ally is his cat. His cat has a rather unique talent; whenever someone tells a lie, the cat exclaims the word “Lying.” An interesting and powerful talent for a cat I must say! The couple eventually end up running  through the Endless Woods. Here they find all sorts of silly, horrific surprises that lurk behind every branch and tree. Another freelancer, The Stalk, stumbles across Alana and Marco. Personally she reminded me a bit of Angelina Jolie….even though The Stalk was a spider-like being with many eyes and arms. The beauty and sinister seduction The Stalk put out just made me envision Angelina Jolie playing The Stalk if this story were made into a film or show.

Marco is injured by The Stalk and Alana is only left alone to defend her baby. The Stalk seemingly looks as if she’s about to put an end to Alana but then soon flees. Alana turns around to see 6 ghosts…1 of them having their torso and guts hanging out with no legs! Her name is soon to be identified as Izabel, who actually turns out to be the most charming character of all! Izabel makes a deal with Alana: heal her husband in exchange for tagging along with the couple. Alana agrees and Marco is fully healed.

Now we are brought up to speed with The Will. He ends up saving a slave-girl (who’s name turns out to be Slave Girl) and eventually crosses paths with Prince Robot IV.  Alana and Marco quickly become confronted by Landfall soldiers and battle them. Realizing that the planet is no longer safe to be on, the head for Rockeship Forest. Their only way into space is by using a rocket in the shape of a tree. The first volume concludes with Marco and Alana having visitors. The ones that don’t need to be here at this time of great peril and chaos. Marco’s parents?!!

And this is what goes through Brian K. Vaughan’s head! He has stated that he has been thinking up this universe ever since he was a boy. For him to just keep this insane story relevant in his mind and piece everything together into what soon became an iconic comic book bends my mind! We as comic lovers give great respect to those who provide us the escape to different worlds and people……yet I sometimes forget that those with the GREAT minds like Brian K. Vaughan speed right past us like a shooting star in a sky of colorful storyboarded pages we all love to read.

Have you read Saga – Vol. 1? What do you think of it? Let us know in the comments section below!