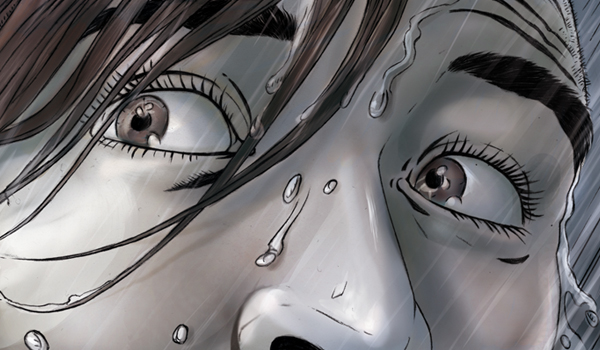 Not so very long ago, the word ‘surveillance’, would suggest a referral to ‘them’. To those rare individuals who for one reason or another, either pose or seek to pose a challenge to ‘society’. Civic concerns regarding the eternal instinct of governments to infiltrate privacy have always been tempered by technological restrictions on capability. This long-standing and relatively cosy status-quo is a thing of the past, as buzzwords such as ‘Wiki-Leaks’ and ‘Snowden’ so immediately remind us. Today, the word ‘surveillance’ refers not to ‘them’ but to ‘all of us’ and it’s quite a revolutionary development.

Creator, Gianluca Bonomo, like many, has had concerns regarding such matters on his mind. In his case however, he had a memorable, imaginative dream visualizing some of the possible consequences of this evolving mass-monitoring technology. The fruit of this inspiration is CCTVYLLE.

The front cover is mysterious, futuristic and sufficiently intriguing to compel you to reach out and turn the page. My own immediate response to it was, ‘I know what I’m looking at, but, just what am I looking at?’. I like to think an artist would be pleased with this reaction.

The cover clearly implies that this is a story set in London and the first text pages reveal a young man running through the paved streets in the pouring rain. This is not some eager, weather-resistant fitness fanatic. The expression on this man’s face is one of unmitigated fear. So, what is he running from? He is running from a logical conclusion. He is running from a tool of the state and he has reason to be fearful. In short order, a door swings open, the pursued is tugged forcefully inside and mercifully spared from ‘the hybrids’ by a guy in a hoodie with an undeniable air of the mysterious about him. 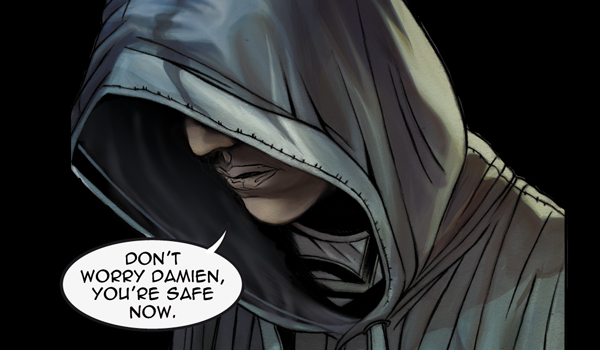 Cut to fast-food joint. Here, we’re introduced to some of the cast of this new saga; however it’s enjoyable reading a tale where the exposition is dovetailed into the dialogue with a lightness of touch and a respect for a reader’s intelligence. Damian is our erstwhile runner. Sean is our enigmatic hooded gentleman, which is evidently an affectation, as he wears it up in all places at all times. Here, they meet with Clare, the third part of this trinity, who listens patiently to Damian’s nervous and flighty recounting of his latest close shave. A circumstance that he is not at all comfortable with. Sean is a man of few words, a relative exemplar of cool whilst Clare is articulate, witty and irreverent. These three young adults are positively unwilling to accept the status-quo. They are taking action and they clearly have plans. How organized and far-reaching these may be, remains to be seen.

This world, this London, one so very much like our own, yet distinctly different, is realized with refreshing clarity and poise. The detail and texture in Salvatore Porcaro’s graphic style is used to great effect throughout. The body language and emotions of each character convince, whilst the backgrounds are embellished to a degree that enables a reader to savour each panel. This adds world-building conviction to the scenes, whilst strengthening the impact of the more fantastical elements of this story. Black-bordered framing facilitates the pacing of the book and provides for an effortless read. Much thought and preparation has gone into the world being established here and it shows.

There is a skill and subtlety to Deborah Allo’s colouring that compliments the line-work. There are plenty of browns and greys used throughout, this being London in the rain and all; this does enable the many opportunities for applied vivid colour to shine, whilst maintaining a palette that reinforces the reality being developed within these pages. 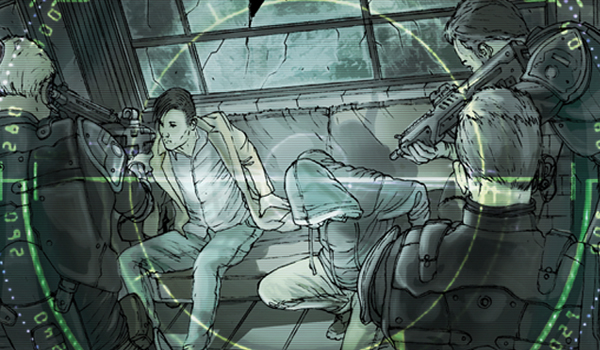 In an important subsequent scene we observe Damian and Sean walking across Trafalgar Square. The first page is relatively close-up and the second pans back. It’s breathtaking. It’s breathtaking firstly, because it’s a joy to look at. And secondly because of the comprehension of the sheer gravity of the forces which these three idealistic young folk have decided to confront.

Quite frankly, I don’t wish to spoil the real enjoyment that’s to be had in the concluding pages of this excellent debut. Suffice to say, the powers that be are revealed with foreboding and there are a number of levels of mystery to behold. There are consequences to displaying resistance and manifestly, the arena is more expansive than revealed in this initial bird’s eye view. Speaking of revelations, this first issue concludes with an absolute hum-dinger. Or two.

Equally satisfying are the questions that confront the reader along with the protagonists. What did I just see? What did I miss?
What is real and what is illusion? The doors of perception can be difficult to unlock.

Go get this! You can do so here and feel free to have a look at a preview at the same location.