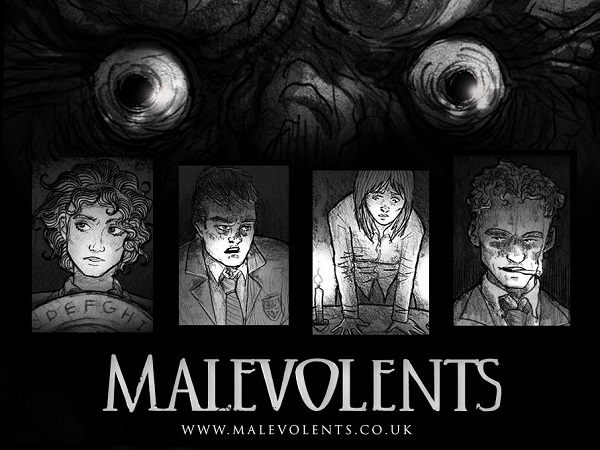 We’ve caught up with one of our previous interviewees, Thom Burgess (see our Ghoster interview with him here!), to talk about his latest project Malevolents, book 1 of which is out now!
A Place to Hang Your Cape: Welcome back to AP2HYC, Thom! Can you start us off by filling us in a little bit on the story of Malevolents?
Thom Burgess: Hi Grace thanks for having me back!  In short Malevolents – Click Click is the first of several supernatural horror stories, aimed to (hopefully) conjure some of  the atmosphere of the classic ghost story, but in a modern setting. All based loosely on real life accounts. This first story is out just in time for Halloween through my site www.greatbritishghosts.com. Having long been a big fan of short horror anthologies like Tales from The Cript, VHS, Crooked House and Number 9, I thought it a great opportunity to really try and portray a supernatural horror in the context of a comic.
Book 1 ‘Click Click’ tells the story of four school friends who are dared to spend the night in London’s most haunted house. In doing so they recount the story of the last boy who dared to do so…and the price it cost him.
AP2HYC: Ghosts and the supernatural are clearly a running theme in your work. What inspired you to tell this story?
Thom: I really wanted to tell a unique ghost story. M R James usually set his work some decades before his lifetime (usually pre-war), so I thought in this case that the 90s would be a great starting point for Malevolents. I also used to work in London not too far from Berkeley Square and the old story about the building used to fascinate me. Especially the context of such a horrific tale set amidst a bustling metropolis like London. On top of which a good friend of mine used to be a manager at a record shop in Canterbury, Kent and told me of this incredibly scary thing that happened to him whilst working one evening. It was a great opportunity to combine the elements together.
All the Malevolents stories are all firmly set in the same universe as ‘Ghoster’ the main graphic novel I’ve been working on for some time. But as the project has grown I thought it best to set the stage first. There’s definitely some Easter Eggs in each story. I’ve always been hyper critical to how supernatural horror is portrayed on TV and film. It’s not often you get a really good scare.
So it was good fun to try and make it as unnerving as possible within the medium of a comic.
AP2HYC: How do you feel you’ve developed as a storyteller since starting Ghoster?
Thom: Ghoster has been great fun to work on. As a graphic novel script it’s nearly completed but it’s definitely taught me that in the context of a graphic novel (and probably other mediums) less is more and you can use the graphical elements to say a great deal more than with a large amount of text. It’s also made me more open to taking the story in different unexpected directions.
I’ve actually been lucky enough to have had the opportunity to write another ghost story which will be appearing on a Brighton based horror program called ‘Fragments of Fear’ later this year. It’s called ‘The Old Coat’ and will be a supernatural horror story read in the style of Jackanory by one of their excellent narrators.  It’s a great programme concept and well with keeping an eye out for. That too has been hugely enjoyable to work on. 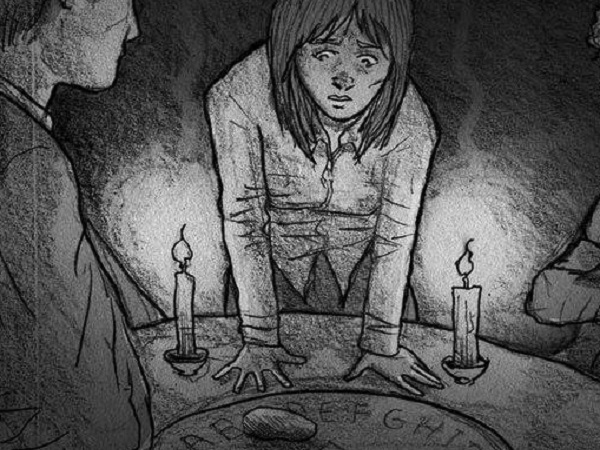 AP2HYC: Fun question now: if you were a ghost what would you spend your time doing?
Thom: I think I’d probably spend my time haunting the bosses of South Eastern Rail. In much the same way they spend their time tormenting regular commuters with price hikes and delayed trains. They offer a far scarier experience than anything Malevolents could offer!
AP2HYC: As only Book 1 is available now, can you give us any hints or clues about the future of Malevolents and where you want to take the story?
Thom: Absolutely. There’s two other scripted stories (with a potential third). The next story ‘Watch the Wall My Darling’ is a Kentish ghost story with a large background in smuggling. Something which is a large part of Kent’s history. It’s probably something the county would like to forget as a whole. But it was a very volatile time where smuggling gangs used to pretty much rule whole parts of the county, existing above the law and fighting with each other.
I’ve always found that hugely interesting. Especially as generally these things happened in the more serene and tranquil parts of Kent. I really liked that juxtaposition and thought it would be interesting to set a ghost story based around that.
AP2HYC: What’s one reason we should all just go ahead and ‘click click’ on buy?
Thom: Well, as the nights are drawing in, it’s the perfect season for a good ghost story. So if you’re a fan of supernatural horror or comics then there’s there no better way to enjoy an evening in than to sit with a copy of Malevolents and assure yourself that the clicking of your thermostat isn’t something, or someone else…
To get yourself a copy of the wonderfully spooky Malevolents – Click Click just follow the link. Also keep your eyes peeled for our review of the comic!