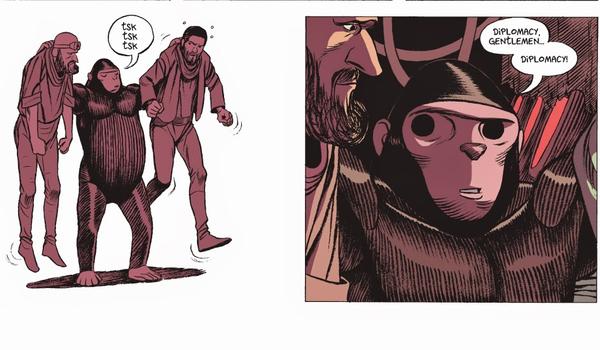 Last week, we brought you the far-reaching adventures of estranged father Verloc, robotic ape servant Churchill and company and their adventures in Aama Vol. 1: The Smell of Warm Dust, the first instalment in Frederik Peeters‘ four-volume sci-fi epic. The tale now continues in Aama Vol. 2: The Invisible Throng.

Picking up where The Smell of Warm Dust ends, The Invisible Throng sees Verloc, his brother Conrad, and a small group of abandoned scientists setting off across the alien world of Ona(ji) in order to recover/discover what has become of Aama, a bio-techno experiment that the scientists were working on. What they discover on their journey is shocking, perilous, petrifying, and near-unimaginable – and that’s just how the reader feels.

All the while, Verloc is recounting these adventures from some point in the future in the form of his diary. Like The Smell of Warm Dust, no immediate explanation is given for his memory loss, or indeed how his present situation has resulted in the majority of his companions disappearing, save for Churchill. In my review of The Smell of Warm Dust, I noted how I felt this plot technique dragged the novel down and cheapened the impact on the reader. Having read The Invisible Throng, those feelings have changed somewhat, and what I feel is a sense of dread for the characters, given what occurs in The Invisible Throng.

Also, as I mentioned in my previous review, I warned (myself, not you) of how a first instalment in any story can gain new light once another instalment is read. This very much the case for The Invisible Throng, as more details are given into Verloc’s troubled past, and how he isn’t the slacker he paints himself to be. His constant scribblings into his diary reveal a highly intelligent and eloquent individual, certainly not the arrogant loud-mouth seen in most of The Smell of Warm Dust.

Much like that first volume, this is where the magic of The Invisible Throng really lies – its fusion of the normal with the fantastic, in Aama‘s case the human drama with the alien adventures. What was touched upon in The Smell of Warm Dust in terms of tense, intimate drama is exploited in The Invisible Throng to high yet tender levels. Once again, dry wit and a touch of humanity keep the story level.

The story itself is narrated with the same calm pace as before, yet it could be argued that less happens in The Invisible Throng than in The Smell of Warm Dust. Plenty happens in terms of Verloc’s past as his partner and daughter become more and more estranged, but the journey itself seems fairly plot-less, yet it is saved by the glorious visuals.

Ultimately, The Invisible Throng is a fine follow-up to The Smell of Warm Dust, and does an excellent job in spinning out the world of Aama to glorious indulgence through spell-bindingly grotesque artwork and tense, idiosyncratic story-telling.

Have you read Aama Vol. 2: The Invisible Throng? What did you make of it? Sound off in the comments or send us your thoughts on Twitter!