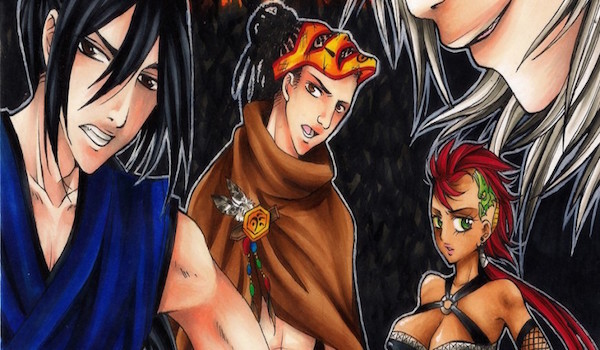 The True Masters Chronicles by Chester Jones III is definitely one of the most unique comics I have ever read, but it also has an essence of familiarity that I couldn’t shake while reading it. I can’t exactly pinpoint what the story reminds me of, though I really enjoyed the read.

The comic takes us into a mystical fantasy world in a region similar to medieval Japan. This area, called Trysho, is split up into eight different regions that are all ruled and governed by their own official bodies. There is also a ninth region, called “The Dark Region”, which is led by a magical figure called Sitowata, the Elephant God. Sitowata is a master of the dark arts and desires to conquer the rest of the land.

The hero of our story is Leo Sumanji, an idealistic young man who was prophesied to lead the Coodidai, a team of disciples entrusted with protecting the land. Leo is the traditional hero you find in this genre: good-natured, likable, but unable to believe in himself.

It is also revealed that Leo has a past with the villainous Sitowata, having trained with him in their youth. In addition to this, someone else who is making life hard for Leo is a rogue ninja named NorthStar, who was once leader of the Coodidai but was seemingly exiled for his actions. In essence: Leo is your standard “underdog” character who has unlikely beginnings, but will most likely turn into a bad-ass fighter later on in the series.

There are many things to like about The True Masters Chronicles. I’m a sucker for great artwork and this comic has outstanding illustrations, thanks to the talents of artist Maike Wender. I was astounded at the pictures. The only thing that perplexed me was the black-and-white color scheme that was chosen. Color is used very sparingly and only shows up on the cover and in small snippets here and there, usually in images of flames. I’m assuming this is meant to be symbolic, but I couldn’t figure it out. Otherwise, I absolutely loved the look of the characters and the settings. The amount of detail is phenomenal and deserves recognition. Another note of criticism is that I wasn’t exactly sure who was saying what in certain scenes. It was difficult to correlate certain speech bubbles with characters, though this was a very minor issue.

Chester Jones III has a knack for storytelling. I thought the story was pretty interesting and easy to follow, and the primary characters were all properly developed. I was a little confused about the role of the Coodidai at first, but as the story unraveled, it made more sense. Also, as I mentioned before, Leo is a bit of a cliche hero. We’ve seen the same tropes in the past, especially in regards to prophecies, but it’s not a bad thing. It’s a story that has seen success in the past, so why deviate from the formula? As the story draws on and we see more of Leo’s personality, maybe we’ll see something that separates him from the herd?

Remember how I said this was a unique comic? There are multiple pieces of evidence for this claim. For one, this is the first comic I ever downloaded from the iPhone app store. If this isn’t being done already, then it should definitely become mainstream. Usually I just purchase my comics from Amazon or the Kindle Store, but making them available through iTunes would make the process much simpler.

When you download The True Masters Chronicles, you don’t just get the story; you get an entire experience. The app lets you read the novel, learn more about the creators, and receive a ton of bonus features. You can watch several videos of the creators at work as they design and draw the characters, and you can check out a teaser trailer as well. I’ll be honest: I actually watched the videos multiple times because I was so fascinated by the comic-making process.

After you check out the videos, you can look through a tab featuring all the main characters. Each character has their own mini-bio that explains a bit about their past and their current role in the story. You can also follow each character on Twitter and communicate with them. I give major credit to Jones and his team for going above and beyond with this aspect.

The True Masters Chronicles has a lot of potential. For an independent comic, it has surprisingly great production value, and it looks like something you’d purchase from one of the big-name publishers. I actually look forward to the rest of the story. The current volume ended with a huge cliffhanger before an epic battle. I can’t wait to see what happens next. I recommend that you download this onto your iPhone or tablet as soon as you can.

Have you checked out The True Masters Chronicles on iTunes? What did you think? Let us know in the comments section or send us your thoughts on Twitter!