Home » REVIEW: The Hobbit: Battle of the Five Armies 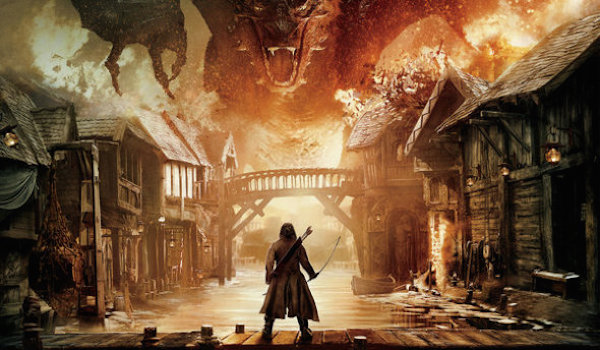 Is this the end of Peter Jackson‘s Middle-Earth movies? Probably not. Knowing Jackson, he could squeeze another five trilogies out of J.R.R. Tolkien‘s remaining works. For now, though, it looks like we’re done with the adventures of Middle-Earth, and The Hobbit: Battle of the Five Armies was a pretty underwhelming conclusion. (spoilers ahead!)

I was not very optimistic about this movie. In fact, I had ill feelings towards all of The Hobbit movies since I heard they were going to be a trilogy. My opinion slowly declined with each film, so I wasn’t exactly ecstatic when I stepped into the movie theater. However, looking at this movie as a stand-alone film… yeah, it still wasn’t fantastic.

The movie picks up almost immediately where the previous installment left off: Smaug is pissed about the dwarves in his domain and sets off to attack Lake-Town. After destroying the city, he is slain by Bard the Bowman. The citizens of Lake-Town want what is rightfully theirs, which is the treasure hidden in the Lonely Mountain. The only problem is that Thorin Oakenshield and his company of dwarves have claimed the mountain and its treasure for their own, and they don’t plan to relinquish their prize anytime soon.

Even though this movie is the shortest of the trilogy, it felt just as long as the rest. Don’t get me started on how dumb it is that we have a movie based on a part of the book that was only a few pages long, but I’ll elaborate on that later. The saving graces of this movie are the great performances and a few semi-decent fight scenes. 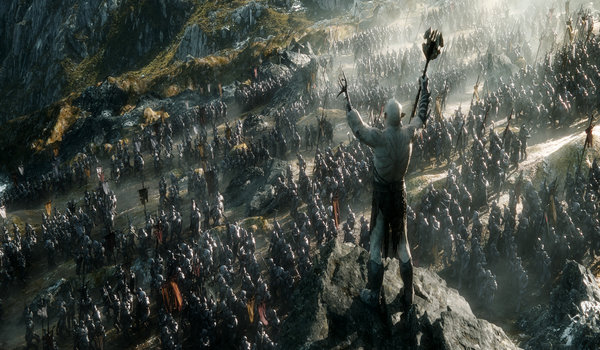 You know the term, “too much of a good thing”? That’s what this movie (and the entire trilogy) has suffered from. It’s obvious that Jackson wanted to capitalize on the major success of the original The Lord of the Rings trilogy, which is why he inflated The Hobbit into three movies. I’m all for creative liberties, but Jackson took it too far. The thing about the book version of The Hobbit is that it’s not the same as The Lord of the Rings. The former was written as a children’s fairy tale while the latter was meant to be an epic saga. Jackson tried to turn the whole thing into a long, continuous saga. The Lord of the Rings was awesome, but The Hobbit was essentially just a remake. I could even find direct parallels between the two trilogies.

The Lord of the Rings did the whole “epic battle scenes” very well. Return of the King had one of the greatest battle sequences I’ve ever seen. But despite this movie being 90% battle, it was severely lacking. Maybe it was the sub-par CGI? Maybe it was the fact that the dwarves’ armor looked very similar to the orc’s armor and I couldn’t tell who was who half the time? Maybe it was the fact that there weren’t even five armies?! I mean, the five armies in the book were the orcs (goblins), the elves, the humans, the dwarves, and the wargs. In this film, I couldn’t tell which army was the fifth. Was it the eagles? Was it the trolls? Was it the “were-worms”, who I don’t recall ever reading about in any of the books?

Let’s talk about Legolas and Tauriel. I was mad that they included these two elves in the movie in the first place since they weren’t in the books. Yes, I know that Legolas’s father was King of Mirkwood so it made a bit of sense to add him. But just because you can do something doesn’t mean you should, especially when it involves adding a poor love story that slows down the entire movie. That’s one of my big complaints with Tauriel as well. I totally understand why they added her (I don’t recall there being any major female characters in the book, so Tauriel was kinda necessary), but they demean her purpose by turning her into a damsel-in-distress and the center of a love-triangle.

Also, about Legolas – this is the first time in six movies that he actually ran out of arrows! Come on! He always had infinite arrows in any other movie, but this is literally the first time he ran out, and of course it was at the most inconvenient time. I had to roll my eyes. This only made me hate Legolas and Tauriel’s inclusion even more.

Supposedly, Viggo Mortensen turned down the chance to reprise his role as Aragorn in this film, and I’m really glad he did. We’d probably have an extra movie. Though at the end of Battle of the Five Armies, there is a pretty corny reference to the character.

As I mentioned earlier, I enjoyed some of the performances in this film. Richard Armitage did a great job as Thorin, even if the character ended up as nothing more than a carbon copy of Aragorn. My favorite sequence in the film was Thorin’s descent into madness from the “dragon sickness”. I felt like that segment was glossed over in the book, so I’m happy that Jackson’s creative liberties actually made something better.

Lee Pace did really well as Thranduil. I first imagined the character as just another copy of Haldir from the original trilogy, but Pace puts his own spin on the character that really brings him to life.

I can’t think of much else to say about the movie that I haven’t pointed out already. Pretty much all of my complaints apply to the whole trilogy. If you’ve seen the first two installments of The Hobbit, then you might as well get some closure and finish it out with this one. Middle-Earth fans may be mad to see such huge changes to the lore, but at least the saga is over. Again, The Hobbit: Battle of the Five Armies was not terrible, but it was hardly anything more than nonstop action scenes with a little plot scattered here and there.

Did you see the Hobbit: Battle of the Five Armies? What did you think about it? Sound off in the comments or send us your thoughts on Twitter!