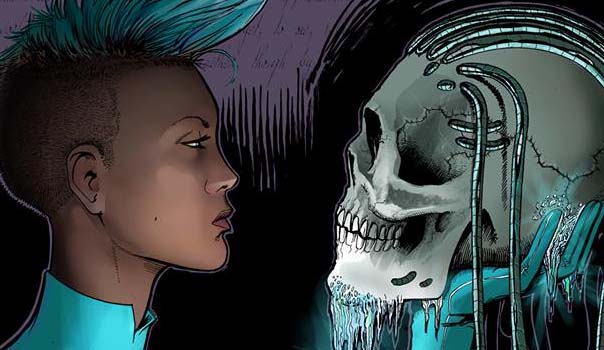 If you were ever in the mood for a 1970’s crime thriller with a mix of heist films and revenge horror thrown into it, then Monolith’s Rapid City: Below Zero #1 is probably up your alley.

The book (written by Josh Dahl, drawn by Shawn Langely, colored by Micah Faulkner, and lettered by K.J. Kaminski) focuses on a pair of super villains – Icicle and Claw Hammer – who are among a group of villains betrayed by their boss – Coil. Coil has set up the theft of a rare crown that is buried deep underground. Icicle, Claw Hammer, and Icicle’s boyfriend, Piledriver, dig deep underground to get it, but only find a bomb left there by Coil to kill them all. Piledriver is killed, and Icicle and Claw Hammer manage to get to the surface.

What follows are flashbacks showing Icicle’s origin and her relationship with Piledriver as she and Claw Hammer fight to get out of their makeshift tomb. Claw Hammer keeps Icicle’s head in the game so she can focus on revenge. It’s an interesting start to a limited series, despite a few bumps. The importance of the crown is never being explained or why Coil’s henchmen had to dig so far underground to get it. This may be explained in an earlier Rapid City series or in future issues, but including it would’ve helped set the tone better.

The artwork by Langely is good. It has a rough edge to it that I like and suits the tone of the series. I like the way he makes Icicle look like a sad, confused woman barely out of her teens in one scene and completely bonkers with lust for revenge in another. Dahl seems to have a large arc planned for Icicle (and Claw Hammer, I suspect), and I’m wondering if this book will become a comic book version of I Spit on Your Grave or another revenge grindhouse film.

You’ll probably like this book if you like anti-hero stories, grindhouse crime films, or noir stories, so make sure you grab a copy when you can!