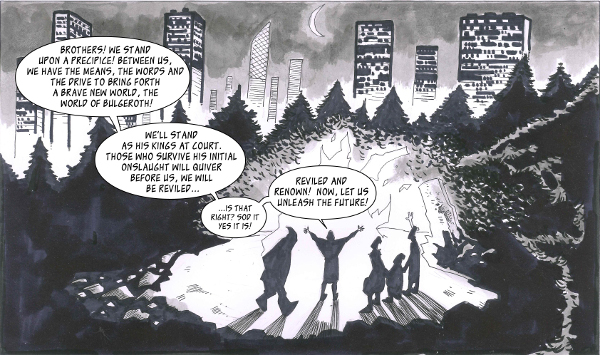 I enjoy horror-themed anthology comics, so I was delighted to be sent this one from England’s Madius Comics to review. Papercuts and Inkstains #1 features three stories written by Rob Jones and each drawn by a different artist.

The cover by Dan Butcher is intriguing. A mastodon loaded with weaponry and carrying a faceless rider looms behind five men in hooded robes who stand before a crackling fire. A snarling decapitated zombie’s head glares at us from the foreground. Is the mastodon-rider in cahoots with the men around the fire? Is the rider their leader? Heck, is the zombie head their leader?

The answer is no to all three questions. The three images represent something from each story in the book. I think an overarching story featuring elements from all three stories would make for an interesting book.  It could easily be done considering the plot of the three story, but I’m getting ahead of myself.

The first story, “By ‘Eck on Hearth”, drawn by Kevin Pospisil, is a zombie apocalypse story told from the perspective of one of the undead and how he regrets taking a bite out of his wife. The stark grays in the story give it a Night of the Living Dead feel I enjoyed.  Pospisil clearly has a love for old horror films given the look he gives to the story.  That’s always a plus in my book.  This story could’ve been spun out into a longer tale.  It definitely leaves you wanting more.

The second story, “The Profits of Doom”, concerns the five men on the cover. They’re a newly formed cult trying to summon an elder god to this world so they can get back at everyone who thinks they’re a joke. Turns out they are a joke and can barely get through the summoning without making hip hop references (the Grandmaster Flash joke is great), forgetting rules they’ve established, or complaining about their jobs. It’s the best-drawn (by Mike Smith) and best-written tale in the book.  The end is a fun cliffhanger and I’d love to see this cult in a full-length book as they try to rein in an elder god and keep their activities secret from their wives and bosses.

The third story, “Clean Up on Aisle 73”, is about a woman (I think) who works in some sort of building that hosts battles of various forces throughout time. Some of them ride weapon-laded mastodons and other dinosaurs while others fight in giant mechanized battle suits or even from horseback. The art (by Nick Gonzo) is rough (again, I’m not sure of the sex of the main character), and I didn’t completely understand the story due to the rough artwork.  The idea of a secret facility being a neutral ground for battles between various time travelers is an interesting one. Jones has a good premise, but the lack of details in the script and art leaves the reader in the dark as to what is happening or why we should care.  I think some better art and a longer, cleaner script could turn it into a fun story, however.

This is a fun indie comic and worth a look if you enjoy anthology books. I’d love to see further stories with the goofy cultists. Jones has a winner there.

Let us know what you think of Papercuts and Inkstains via sounding off in the comments or send us your thoughts on Twitter!