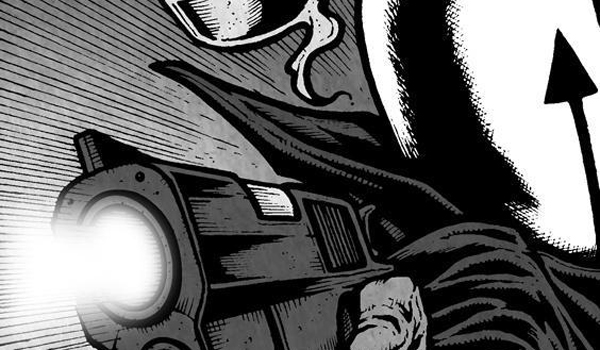 If you give a sociopath a time machine, a lack of oversight, and a gun that can kill anything, you’d end up with The Midnight Man, a comic written by Mo Ali and illustrated by Andy Bloor.  The Midnight Man reads as a chaotic romp through time as the titular anti-hero follows some kind of mission killing just about everyone he comes across.

The debut book offers lots of creative ideas, such as a spiritually possessed zombie horse, a holographic free-roaming draconic flash drive, and future Shanghai, but primarily, this first issue serves to introduce the myth, the legend, and the snarky badassery of The Midnight Man, but without the use of an origin story which hopefully will come later.

We get dropped in at the end of a battle with clues that lead to the next time stop on Midnight Man’s journey but without explaining where he was coming from nor his ultimate end goal.  He jumps from the past to the future and back again at will encountering possibly other time travelers all of whom end up with a bullet or death in some form delivered by the protagonist.  Indeed, his moves, his wits, his tech, and his utter lack of mercy are on full display and demonstrated in multiple time periods like a giant montage.  Unfortunately, this does end up raising more questions than answers, potentially sparking the curiosity for future instalments but running the risk of confusing readers with the seeming lack of direction.  Who needs direction when you’re busy kicking so much ass, right?  Well if that’s enough for you, then this is perfectly up your alley and and admittedly more fun on occasion, like your unapologetic 80’s action movies with unlimited bullets and bodies.  However, the back-cover summary indicated there’s a time-spanning criminal organization Midnight Man is targeting, and hopefully the adrenaline will ease down sufficiently in the next few issues to actually explain some of that. 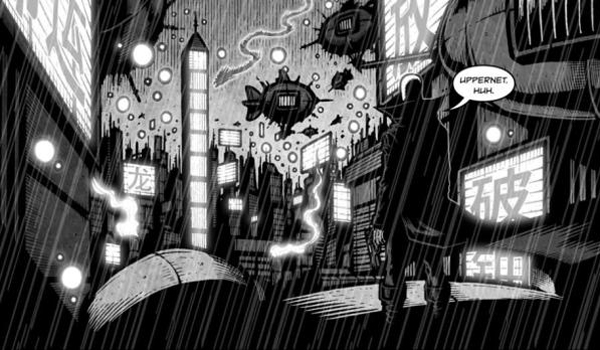 The art is beautifully rendered in a classic ink-on-paper cross-hatching style but what’s possibly most impressive is how consistent and clear the panels were.  Never was I confused about who was who from one panel to the next, not just because each character had a strong unique design, but the face is the same exact face from a different angle, as though a model was being photographed.  The settings Bloor draws are also well-created, be it dystopian London, a Mayan temple, or a future Shanghai resembling Ridley Scott’s Blade Runner.  The Midnight Man himself, in behavior, design, and skill set, seems to be an amalgam of X-Force’s Cable, Deadpool, and Fantomex, The Matrix‘s Neo, and the Watchmen’s Rorschach.  The mask is especially clever though, an arrow pointing towards the 12 o’clock position.

Deep story is not the focus for the first issue of The Midnight Man, but subtle hints of character depth and overlying story line are there if you can filter out the action and violence.  However, in the attempt to be outrageous, Ali may have gone a little over the line suggesting Midnight Man was responsible for the assassination of JFK.  I hope that will be explained in a future issue or it becomes an unnecessarily tasteless addition to a character that’s already too cocky to be sympathetic towards.  I do think though perhaps the purpose of The Midnight Man was more about checking your moral compass at the door and to just have fun with this, and if so, it’s a success.  You can follow The Midnight Man tumblr here.

Which time traveler kicks the most ass?  Who would win in a fight between them?  Sound off in the comments or send us your thoughts on Twitter!